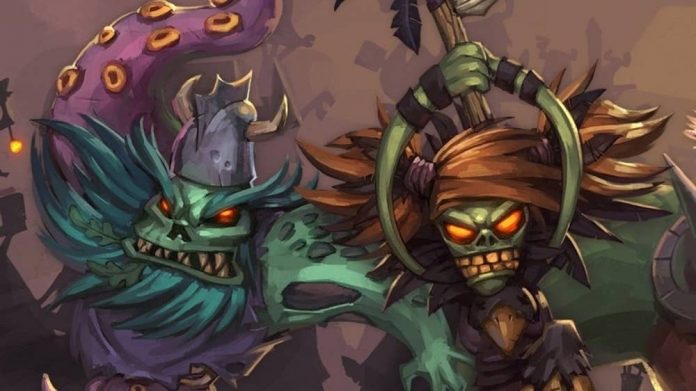 Initially it was all about sparkling vampires, then werewolves and now zombies… but Zombie Vikings?

Those are two words I never thought I’d hear together, especially when they’re included in the same game as Odin and his cheeky not-so-nipper, Loki. Sadly we’re not faced with Anthony Hopkins and Tom Hiddleston (mmm), but instead we’re given a fair performance by plenty of multi-skilled voice actors. Does it work as a whole though? This is the main question I asked.

We’re first introduced to a cinematic that shows glitter-addicted Odin having his “good” eye stolen by the devious Loki, tut-tut. Odin then begrudgingly summons our four protagonists; Hedgy, Caw-Kaa, Gunborg and Seagurd all of whom have surprisingly individual personalities for gameplay, meaning each playthrough is slightly different depending on the character you play with. My one disappointment with this – and it is very minor – is there’s nothing special about it. Side-scrolling 2D brawlers will generally be slightly disappointing as they only have three buttons for combat and one to jump. My experience of the combat system was that I just bashed square endlessly whilst holding down R2 (run) to avoid larger enemy attacks. It’s still fun, but nothing new-age about it.

Granted, the game runs phenomenally better since its recent update patch. The framerates have sorted themselves out and the audio of the headless zombie (Wade?), which was incredibly bubbly a couple of weeks ago, has improved massively. I did experience another crash while waiting to respawn but it wasn’t major so it didn’t dampen my experience. Another improvement is that the combat isn’t so laggy. Before I’d be darting back and forth swinging and missing mostly everything bigger than me and then get absolutely murdered in a couple of hits. Now, at least I can land a few and properly charge up attacks – which I actually found less useful than spamming square – defeating enemies in reasonable comfort. The battle with the worm prince still irritated me however, despite the fact I actually managed to defeat him in this playthrough. I noticed that even if you’re standing out of range of the “worm whip” you can still be damaged, hence me holding down R2 and zig-zagging the entire time. One final thing I’ll say about combat is that I think they really missed out on an opportunity to save Zombie Vikings from becoming less monotonous. By including something as meek as levelling up abilities, even simplistically so, like Ori and The Blind Forest, they could have made long-term gameplay more bearable for a single player. Or on the flip side of things, include different enemies for different game modes, i.e. more enemies for more players and less for less. I know when you’re playing with three other friends the combat will seem easy-breezy but for little me on my own I was just swinging my sword at wave-after-wave of the same enemies, slowly growing more bored than frustrated. This also goes for the weapons you can purchase, and what I so often find in even AAA video games. It gives you no motivation to buy a new weapon when it doesn’t improve on the one you have already. Okay, some weapons have qualities unlike others but from what I could tell the swords that cost 2,000 coins did the same amount of damage as the one I started off with. Maybe I’m a cheap-skate, I don’t know.

Anyway, I won’t dwell so let’s move on to the good. Beijer, Lyngeled and Weinersmith did a great job writing Zombie Vikings. We find so often in video games that people can usually go overboard on humour if they’re actively trying to make it comedic and for the age group intended I think it’s fairly perfect. I was initially confused as to what age we were looking at. Considering some of the language and suggestive dialogue, i.e. the “sexy kind” of zombie, or, “I’m trying to totally get with this hot guy”, I ruled out the 8-10 year old range straight away, despite the visual aspect of the game fitting the bill for the age group. I think PEGI 12 was the right decision on Zoink!’s end; whilst I did laugh at a lot of the dialogue I can see that it won’t be everyone’s cup of tea, let alone older teens/young adults. Its occasional cringeworthy gag and forcibly delivered effect can dampen the fun but it’s nice to know that I still have the humour of a child half my age, hoorah! Another thing I love is the colour and dynamic design of the whole thing. If Rayman Origins and Broken Age had a baby this is what I would expect it to look like… you know… if it also got slightly mutated and had Rayman questioning whether he was the father. Yes, it’s very busy at times and when you’re playing with another person it can get a bit confusing but, boy, is it pretty. I’m also a commercial sucker for the 2D character and level design which in turn is made to look almost like a pop-up book – again the child inside me was singing.

This game has gotten a lot of negative shtick in the press and I think we need to be reminded – it’s a game for kids – so it’s going to be cheesy and laughably American in a sense. During my first experience I wasn’t very impressed with it but once the bugs got fixed and it became playable I actually had a relatively good time because it brought back a few memories of playing video games in the late 90s. Side-scrolling brawlers are classics and aren’t meant to change the world of gaming. They’re just supposed to be fun. So once I put on my 12 year-old eyes (slightly creepy way of phrasing) I could see this game for what it is: it’s pretty, it’s easy, and it’s fun.

It’s nice to see a game that offers local co-op, giving us all the opportunity to have a few beers as adults and yell at each other over stealing coins and brains and winning the round. Just like kids again.

Zombie Vikings is available on PlayStation 4.