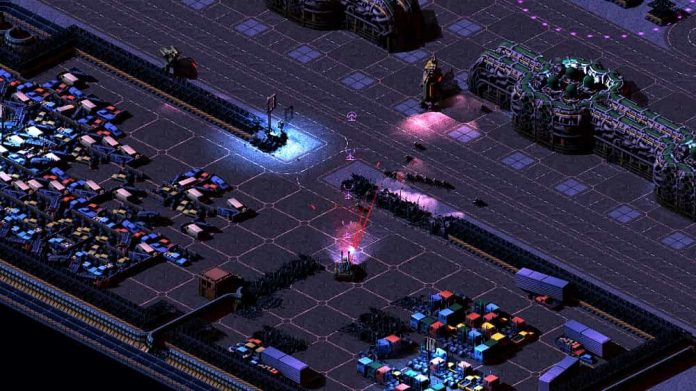 Brigador is a Cyberpunk flavoured derivation of Terminator – a generous mix of the Future War segments of Terminator films, tempered by some of the visual flairs seen in Blade Runner. It feels a lot like Syndicate in that you spend quite a lot of time bulldozing huge, futuristic buildings and putting dozens of civilians, or rather, they walk into your lasers as you’re trying to destroy enemy robots.

Brigador is a newly released early access game on Steam, and although it’s in its most basic form right now, it’s showing a promising start. Graphically speaking, this game is beautiful: each level is a neon punctuated, rain-soaked feast for the eyes. It seems as though developers Stellar Jockeys are going for a kind of mid 90’s top down aesthetic but there isn’t a single drop of pixel art to be found here; you can see every detail of each neon-soaked building. The graphics manage to be both bright, yet broodingly dark at the same time. It seems to have found a strong aesthetic already, this early in development, which is great. 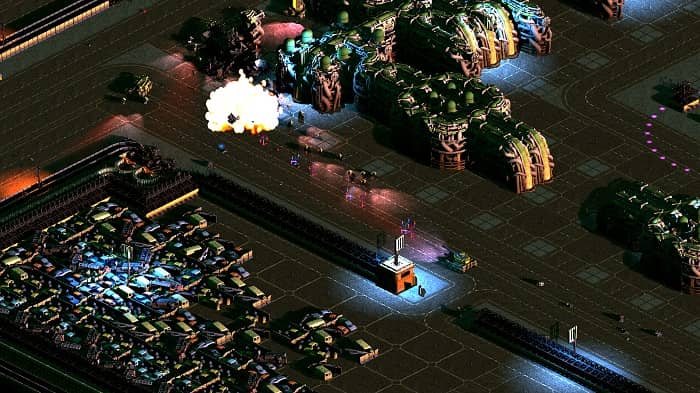 The game itself is, as the Early Access title suggests, very bare bones. As of right now, the only options available to you are a handful of levels, where your robot of death is placed within, and you have to either eliminate all the other robots on the map or complete a very basic set of objectives. That’s pretty much it. Like I said, it’s very light on content right now, but what you do get is a really fun, responsive top-down action game with some early hints at something a little stronger underneath.

Each weapon has a penetration value, and depending on the force of your weapon, you could potentially rail gun robots through about six buildings. It feels great to punch through a huge city block, too, as they shatter and break, with tiny pixels of glass and concrete debris scattering across the map, before revealing the skeletal remains of the building underneath. Another shot demolishes it completely, leaving nothing but rubble and scorched earth in its wake – it’s beautiful in it’s destruction, and I love the idea that you lay waste to an entire city just to blow up other robots. It’s a bit like a Blade Runner approximation of Transformers. 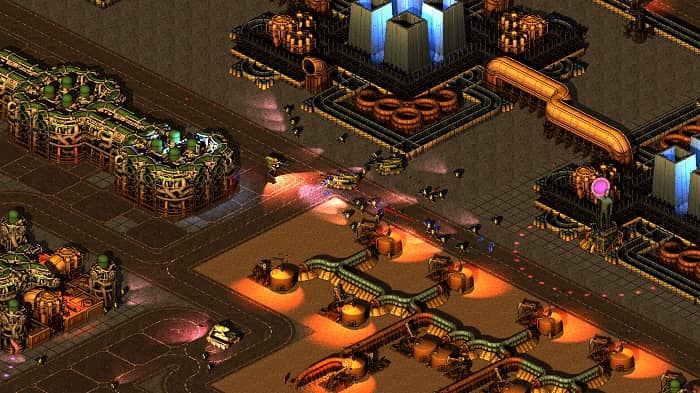 At the moment, there’s a limited selection of robots to pick, each with varying stats. They range from big, stompy walkers, to hulking great tanks and other oddities, but it’s really good to see a nice, variety in your avatar selections. Further on from that, you can also chose which primary and secondary weapon you’d like to use, again each with their own stats, positives and negatives. I personally found myself using one of the walker robots, and sporting a long rail cannon weapon, and a machine gun to hoover up all those pesky troops that seem to think they can kill you. This early on it’s a little hard to tell whether or not these choices will be placed behind a progression system, or some kind of gating of the hardware but I feel they should be. As solid as the gameplay is, and as beautiful as it looks, it kind of just exists in isolation all on its own. you pick a level, choose a robot, slap some guns on it and off you go. There’s no context really, both from a gameplay perspective and a story perspective. It’s early days, but that’s something I’d really like to see. I’d love to see a dystopian story where the corporations are having robot wars with each other: wacky, zany sci-fi stuff, right from pages of a pulp science fiction comic.

That being said, it really doesn’t feel as fleshed out as it could be. Once your objectives are complete, the level ends and that’s that. Pick a new one from the menu and move right along. I’m not so concerned about this as clearly this is going to be developed over time but right now, it’s pretty basic. What little content there is, however, shows a whole lot of promise and I absolutely love the visuals in the game. It’s a homage to the gritty future war segments from Terminator, with a sly nod towards Blade Runner for good measure. So far? I’m intrigued.

Brigador is currently in Early Access and is available on Steam.