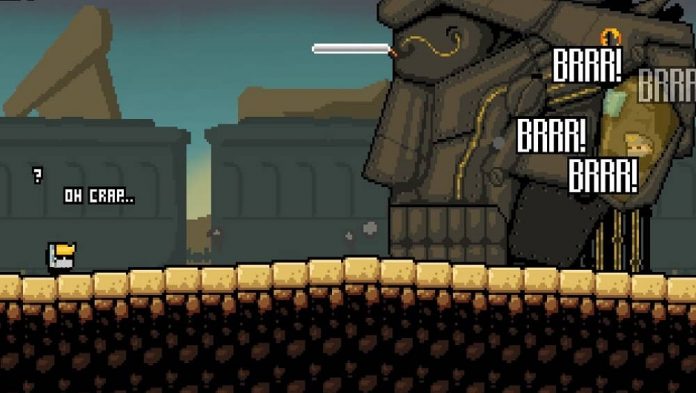 They say imitation is the sincerest form of flattery, so when a game imitates classic shooters like Metal Slug and Contra – and has a character resembling Mr T albeit armed with a flamethrower – it sounds like a recipe for success!

“Oh crap”, your character exclaims, as a giant Metal Slug imitation boss rises from the ground. Large, pixelated words appear on the screen as the boss laughs “Hah hah hah ha!” and exposes the only weak spot (á la Mega Man) as you dodge its attacks and the swarms of henchmen that fill the screen. The bullets and rockets move slow enough for you to jump over them, whilst the sound effects and visuals could fool anyone into thinking they were playing a retro game from the early 90s.

In Gunslugs you can control one of several main characters: the typical square-jawed hero (who was strangely reminiscent of Johnny Bravo) a dual-wielding female sidekick with a name possibly inspired by the Kill Bill movies, and tributes to Mr T and Rambo. You can swap the characters mid-game whenever you rescue one, each with their unique loadout. The flamethrower, for instance, is great against all enemy types but can’t damage the scenery, whereas the dual pistols are great in the middle of the fray, but chew up ammunition like it’s going out of fashion. You’re not limited to just their default weapons, however. Along the way, you can pick up rocket launchers, drive tanks, mechsuits, use gun turets or get power ups, all of which are designed to put a smile on your face and ensure those pesky enemies drop like flies. 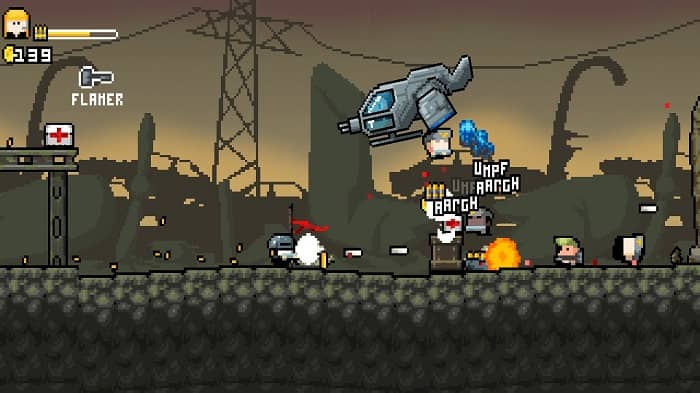 Sticking to its inspirational routes, Gunslugs lets you learn how the play the game through letting you play the game. There’s a brief tutorial on the starting screen where you can start the campaign, do challenges, change the audio etc., but once in the campaign, you learn by playing. Take the first boss, for example. It’s a giant metal head that wouldn’t look too out of place on Easter Island. You’re not told how to kill it, and will spend the first few seconds hopping around and spraying it, none of which seems to do much. Despite your best efforts, the teeth drop down and it shoots missiles at you, which you can hop over with ease, and if you score a hit the mouth, the boss flashes to let you know you’ve found the cliché holy grail of “video game boss weakspot”. This is where the Mega Man influence shines the brightest. All bosses/minibosses have a weakspot which you only find through game progression, but it’s never done in such a way you are killed before realising, let alone hurt. Even the many obstacles throughout each level all allow you to work out the frequency or trajectory arc, so you can avoid taking damage whilst learning how the game works. It’s very simple but very clever at the same time. I mean hey, I’m learning what to do whilst having fun! That’s a good thing, right?

You can learn from your mistakes, too. Your health doesn’t regenerate, so you have to rely on health pick-ups, which are dropped by most enemies but also dotted around the levels. There’s never such a saturation of them that you can just breeze through the levels without pausing for breath, but it’ll make boss battles enjoyably tense: if you’re running on empty you can kill the soldiers to get the health, or risk it all and see if you can beat the boss with two mere pixels of the red stuff. Keep an eye on the ammunition indicator too. Again, that will never run out entirely but you’ll certainly notice it when it gets low. Gunslugs 2 is never so easy that it will bore you, but you’ll never be overly challenged either. 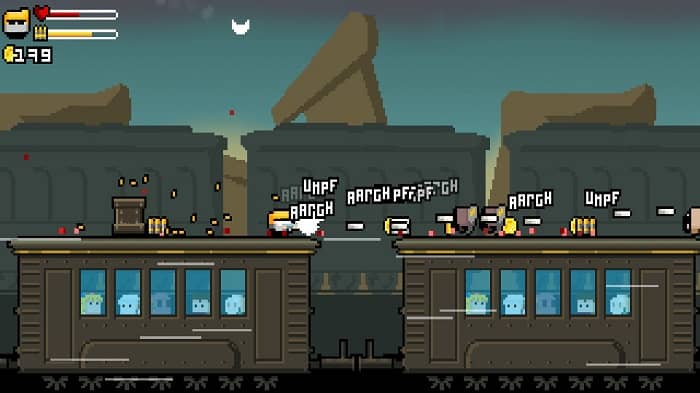 With that in mind, the game just wouldn’t work if it was too much of a challenge. The atmosphere and pacing of the game is relatively chilled from the start, which makes the action-packed sequences all the more enjoyable whilst adding an injection of difficulty. There’s several per level to keep things varied, and sometimes even the level itself will come after you. They’re not back to back, mind. For example, when you topple an enemy stronghold, you’ll parachute down and have a chance to catch your breath and lick your wounds, collecting health and ammo should you need it, before facing a helicopter drop or a miniboss. Rinse and repeat. The levels end when you “get to da choppa”, but there’s nothing to stop you from back tracking to see if there’s anything you missed. Everything drops coins, which you use to buy the power ups. Continuing the theme, you’re never rolling in it but never too poor to buy the 100+ upgrades of double-shot or half-damage. It’s well thought out, in terms of level design and flow, and you’re never left there thinking “What do I do now?” or “Where do I go?”. If in doubt: go right.

Combined with very simple controls (the arrow keys move, space bar or X shoots) the gameplay of Gunslugs 2 becomes something that’s quick to master, even if the controls themselves could be a bit tighter. Especially the jump arc, with some platforms appearing to be at the limit. In its own right, Gunslugs is still good fun. It’s got tongue-in-cheek humour with plenty of movie-style quips and retro-gaming throwbacks, but with a much crisper colour palette, faster-paced action and improved sound. Yes, it still sounds like the old games we grew up with, but it isn’t nearly as distorted or tinny sounding. I wouldn’t have minded some more modern effects though, but that wouldn’t have worked with the styling. The detail is impressive too. Bullet casings clatter to the ground and the explosion effects are very smooth, as is the animation as a whole. But that’s where a problem lies with games that take on the classic look – they constantly get compared to their source material. This is pretty unavoidable and can taint the game overall, because you’re often thinking “this reminds me of…” without noticing the actual content of the game, but given this game’s styling and references, I’m not sure it’s possible to completely rid yourself of those thoughts. 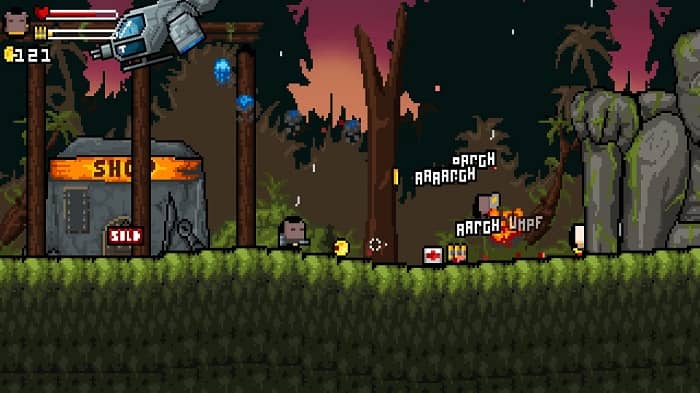 Overall, there’s nothing to really fault Gunslugs 2 on. Sure, it’s not very long, but then what do you expect for a fiver? It’s not particularly difficult either, but it’s not supposed to be that sort of game. There is some repetition in the levels, but its the right amount to keep things entertaining. It’s supposed to be fun and a bit silly – and it is, in just the right amount!

Gunslugs 2 is available on PC.