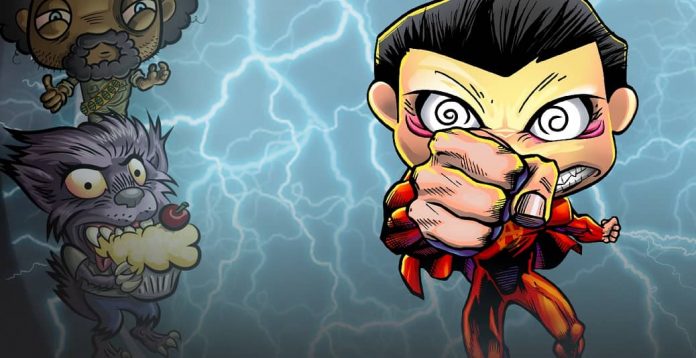 Triple-A cinematic epics are all well and good, but sometimes you just want to kick back and relax with something a little more pick up and play, something you can enjoy with a small group of friends that will be sure to provide some riotous fun, and for those times, you’ll be glad for games like Overruled!.

Developed by Dlala Studios and published by Team 17, Overruled! is a multiplayer brawler with a unique dynamic: the rules can change at one press of a button.

Charming you with its rather inventive character select screen, which sees its crazy assortment of characters packaged up like vinyl figures on a shops shelf, Overruled! allows you and three other competitors to duke it out in short battles that can span a whole host of game types. A game may begin with you all racing for chequered flags, before abruptly setting one character on fire and tasking them to pass the fire on by punching another competitor. It’s crazy, it’s unpredictable, but more importantly, it’s fun. 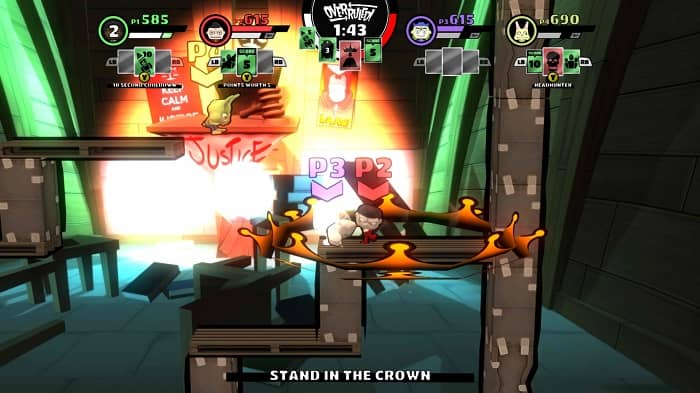 As a game with multiplayer as the main focus, you’ll be happy that you can play both locally and online, and upon entering the multiplayer mode you’ll find the ability to tweak your matches just to your liking. You can define parameters such as the game types in circulation, game duration and players’ health, although the nature of the game means that you should always expect the unexpected. I say this because by collecting cards that litter the playing areas players can change things such as the rules of the game and even the game type on the fly.

With the victor being the competitor that has the most points by the end of the battle, you may want to use a card that increases the points scored for completing objectives when you’ve got the upper hand for example, or use a card that lowers points scored when other players are roaring ahead. Alternatively, you may want to play a card that changes the game type to one that you prefer to gain the upper hand. Of course, this is all dependent on your luck as you won’t know what a card does until you pick it up, but with the ability to store a small deck of cards and play whichever one you want when you think it is appropriate, battles can become quite strategic. 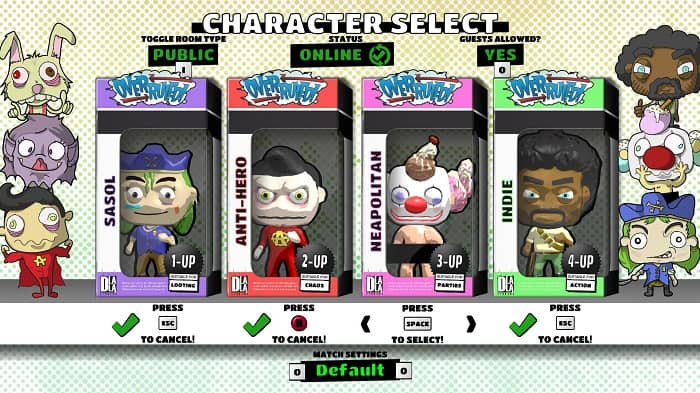 If you’ve got no friends or just want to chill out and practice your skills, there’s also a single player challenge mode. With only one character initially selectable, you have to complete a set of six levels each based around a game type, unlocking new characters and challenges as you go. Graded for your performance based on the number of points you’ve gained, it’s disappointing that the difficulty of obtaining the highest rank in these challenges is rather erratic, as otherwise, it’s provides a nice diversion from the chaotic multiplayer. I should make it perfectly clear however, that unless you are going to partake in the multiplayer action this is probably not the game for you. Whilst the single player challenge mode is limited fun, it’s not worth the price of entry alone.

So, it all sounds rather good up to now doesn’t it? The fact of the matter is, Overruled! is great fun to play but there are a few niggling issues that drag the experience down somewhat. The melee combat, for example, feels awkward thanks to the small attack range that characters have and the zoomed out nature of the camera. The game’s major problem though is just how dreary it all is in terms of presentation. Whilst there’s a nice range of characters and environments, they all just look rather dull and not particularly pleasing to the eye. Even worse than the visuals is the audio, with a soundtrack that grates and voice acting that is so bad it’s actually very nearly funny. 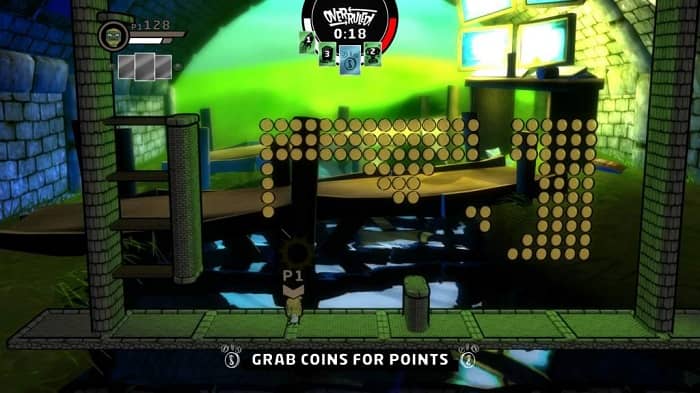 If you can see past the poor audio and visuals then Overruled! will undoubtedly provide many hours of enjoyable mayhem. Its unpredictable gameplay sets it apart from other games in the genre, and the inclusion of a single player mode is a nice touch, even though it’s not too inspiring. All the online brawls I played were stable and lag free, and were always sure to put a smile on my face due to their anarchic nature. Overruled! certainly isn’t perfect, but it achieves what it sets out to do – providing maniacal gameplay for up to four players – and for that purpose, it definitely deserves your attention.

Overruled! is available on PlayStation 4, Xbox One and PC. We reviewed the Xbox One version.