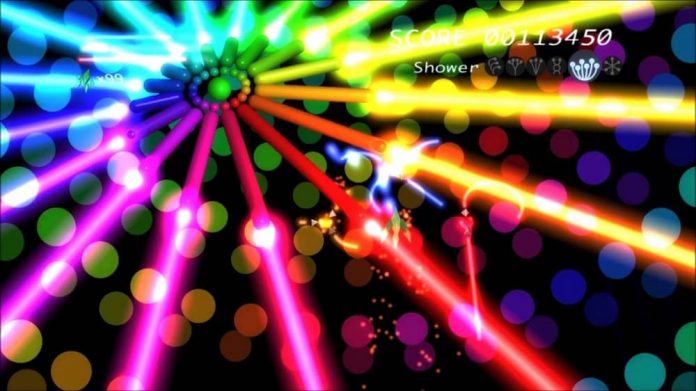 I’ve played a fair few Japanese vertical shooters in my time but I’ve never played one quite like Prismatic Solid.

Created by YO1 KOMORI with music by Shinji Hosoe and Ayako Saso, its abstract visual design is so striking that you could almost take a still of the game at any point and pass it off as a piece of modern art. It’s not only its visuals that are unique either; its tentacle-based sub-weapon system stands out to make this game feel fresh despite its retro heritage.

The core gameplay is the same as any game of its type: you scroll vertically through five stages of sheer bedlam, shooting enemies, avoiding obstacles and collecting power-ups as you go. Should you reach the end of a stage you’ll encounter a boss, whom you must defeat by learning their attack patterns and adjusting your strategy accordingly. What makes the game so interesting though, are the little vessels that gravitate around your ship, and how their arrangement adjusts your offensive and defensive options.

Sprouting tentacles that protrude and squirm out of their orifices, the vessels’ position around your ship can be changed with a press of a button, allowing you to quickly switch between six fire modes at any time such as homing, spread and rainbow – each good for a given enemy or situation. More useful though, are the tentacles themselves. Coloured blue, magenta and red, they act as a shield, protecting you from any bullets that come into contact with them, and so by changing their position around your ship you can allocate your defences to where you need them the most. Whilst the tentacles start small and therefore don’t block a huge number of bullets, by killing certain enemies and collecting the coloured power-ups that they drop you can increase the size of the respective coloured tentacles, boosting their capabilities. Their usefulness doesn’t just stop at defence either, as they are also highly damaging to enemies should they come into contact with them, and you can choose to expend some of a coloured tentacle’s energy at any point in order to perform a powerful screen clearing sweep attack. 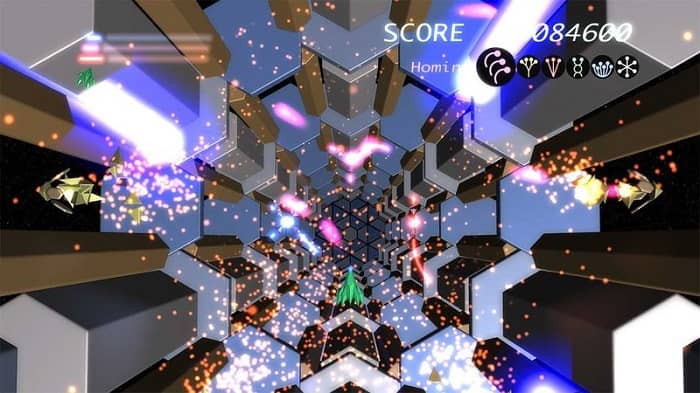 Although it initially takes time to get used to the game’s unique tentacle system, after a short while you’ll find yourself quickly switching between fire modes to make the best use of the tentacles and protect your ship from harm. Unusually for a shooter of its type though, Prismatic Solid has quite a nice learning curve, and you’ll probably complete the first three or four stages with little difficulty whatsoever. With only five stages available (plus an extra stage if you find the secret to unlocking it) and no difficulty options, the perceived lack of challenge may be worrisome to shooter aficionados. The truth is they have no need to worry though, as upon completing the game’s five stages they begin to loop around again, only this time with more enemies and a few other changes. Whilst I was unable to make it past the second loop of stages, a quick look at the game’s online leaderboards shows that some skilled players have made it to 12 loops which must be pretty insane!

Frankly, the only facet of Prismatic Solid where I believe some players may find issue is with the lack of content. Even though the stages loop, offering a new challenge each time, they’re still essentially the same stages. Also, there’s no story to speak of whatsoever. Personally, I wasn’t bothered by either of these aspects as I feel that this is a game that doesn’t need any bloat – it’s simply a blast to play thanks to the tight gameplay, sumptuous visuals and pumping music – but some may find what it offers a little too barren. Even the game’s options menu is sparse, but at least it does allow you to customise the controls in their entirety. 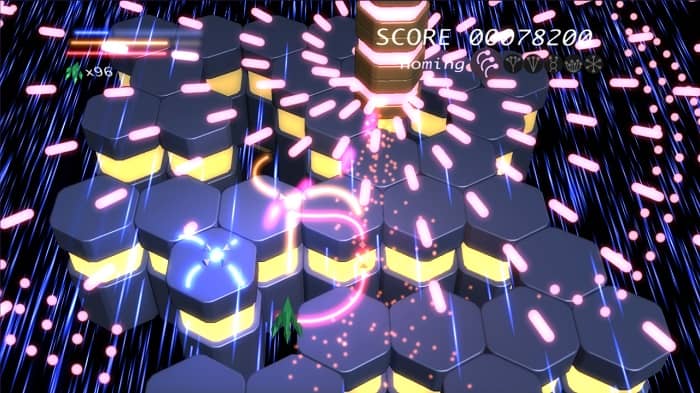 Overall, Prismatic Solid really took me by surprise. Weighing in at less than a 200mb download I really didn’t expect it to look so good for a start. It may lack the bells and whistles that other shooters of its type may have, but its combination of hypnotic and inventive stages working flawlessly in conjunction with its unique gameplay mechanics creates an experience like no other. Whilst most shooters may have more content, Prismatic Solid has style in abundance and a whole heap of addictive gameplay that will see you coming back to it again and again. That’s a good trade-off, don’t you think?

Prismatic Solid is available on PlayStation 4.