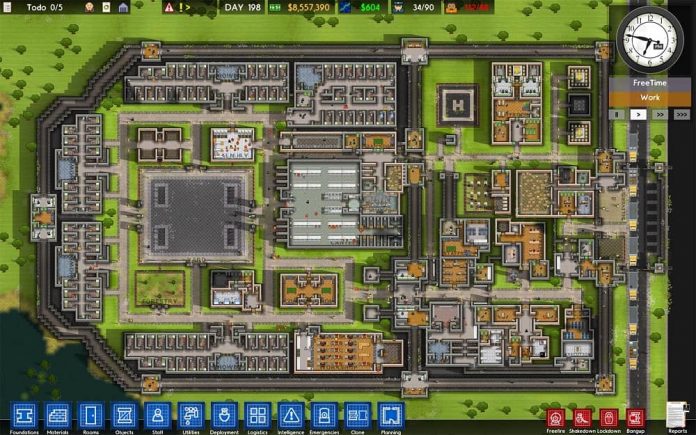 Doing hard time now has a new meaning (especially as that statement comes from someone who has played this game for 125+ hours).

From the studio who brought us the hit games Uplink, Darwinia and DEFCON (and who famously only employ 10 people) comes Prison Architect, or as the game developers suggest: “the world’s first Lock ‘Em Up”. Inspired by games like Dungeon Keeper and Theme Hospital, Prison Architect is a construction and management simulation game where the player is entrusted with the duty of building their own prison. Players will need to juggle a lot of responsibilities if their super max is going to succeed.

At its heart, Prison Architect is a construction game. You start out with a small plot of land and $30,000. To start off with, you’ll need to build a simple operation of a holding cell, showers, a yard, canteen and kitchen. Eventually, your first prisoners will arrive and you can finally get underway making money. There’s no time to relax though, as prisoners need cells, catering, security, exercise and entertainment. You’ll also need to continue to expand your prison if you want to earn the big bucks. All this requires extra money, which can be attained through the allocation of grants. Grants are awarded for completing a series of set goals; you’ll be given some money upfront (mostly), and once all of the requirements have been met, you’ll be awarded with more money. Building a bigger prison for lots of prisoners is not enough though; although you may be housing hardened criminals, it’s not all doom and gloom for them – they need to have a little fun. You’ll need to build places for them to do stuff; how about weightlifting or playing snooker? Alternatively, you could provide them with an education, or set them to work doing jobs around the facility. You have plenty of tools at your disposal so you can better design your prison before laying the first brick. With enough experience and thought, prisons can become so much more than just profitable ventures, but works of art too. Me, I designed my prison to look like the prison from The Raid 2. 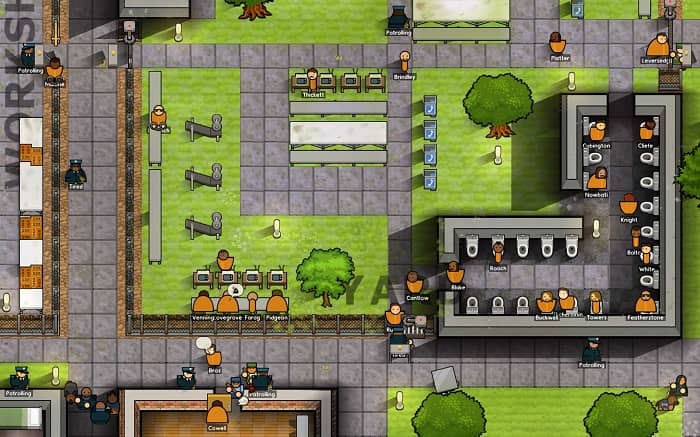 Unfortunately, it’s not all happy days in construction mode, because the moment prisoners enter, players go from being architects to prison managers moonlighting as architects. You will now need to run the facility like a well-oiled machine to ensure that it makes money. You need to hire staff to do jobs; from guards to gardeners, from cooks to cleaners. You need to assign and equip guards to keep the prison a happy place for all, hire doctors to treat wounds, and even call in riot police in case of, well, you know… a riot! And that’s not all; you also have to manage everything from prisoner schedules, to deciding on security clearances, to even conducting an execution. Eventually, or when you’ve had enough of your small mediocre outfit, you can sell your hard work for profit and start up somewhere else, with all this well-earned knowledge, experience and most importantly, cold hard cash.

Management of the prison is nicely designed, showing how easy it is to both make and lose money as the game progresses. It’s simultaneously both satisfying and frustrating, but as long as you’re making a profit, that’s what matters. The use of grants, bank loans and selling shares in the prison is a nice little technique to ensure you have some money to access. Prisons can also be expanded not just in the current plot of land, but with the acquisition of more. 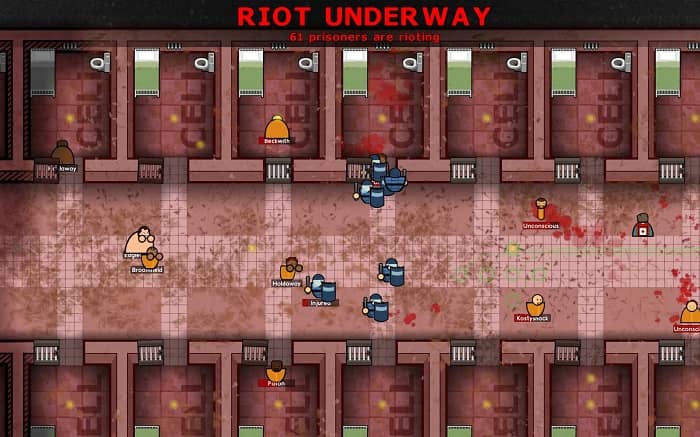 The real fun of the game is to be found in sandbox mode: Prison Architect does have a campaign mode (if you can call it that), but it’s a bit subsided; it isn’t much more than a small collection of tutorials teaching players how to deal with certain circumstances. These range from how to deal with fires and riots, to how to provide for prisoners needs. Where the campaign mode does shine though is in its storytelling: it has an intricately developed story beginning with a condemned man, and goes on to reveal corruption inside and outside the prison. It details nicely the consequences of the corruption and adds a depth not often seen in management simulator games. Added to this is a nice combination of art and basic animations to make the story both fun and interesting to watch and discover.

Prison Architect is not without its flaws. The game has four speed settings (essentially pause, play, fast and fastest), however if you are anything like me and want things to happen sooner you’ll end up putting it on its fastest setting all the time. Annoyingly, the game will randomly switch itself back to normal speed when certain actions are carried out. It isn’t much of a problem, but is a minor frustration when you’ve got a good rhythm going. Other bugs I encountered include consistent runtime errors if you play for long periods, not being able to build objects in specific areas while you can everywhere else, walls being built where you didn’t ask any to be built, and long pauses for auto saving. More frustratingly, the game slows down to a crawl the bigger and busier the prison gets. Considering that the game is not too graphically powered nor has any real form of a soundtrack, this is an issue that could really take your enjoyment out of the game. The game’s visuals and sound are nothing bad though: the graphics are nicely designed flat 2D shapes which are rather aesthetically pleasing. As for the game’s lack of soundtrack, it has one in the form of (what I imagine are) realistic sound effects of being inside the slammer. It doesn’t need any music as this use of sound creates a much higher level of detail and reality. 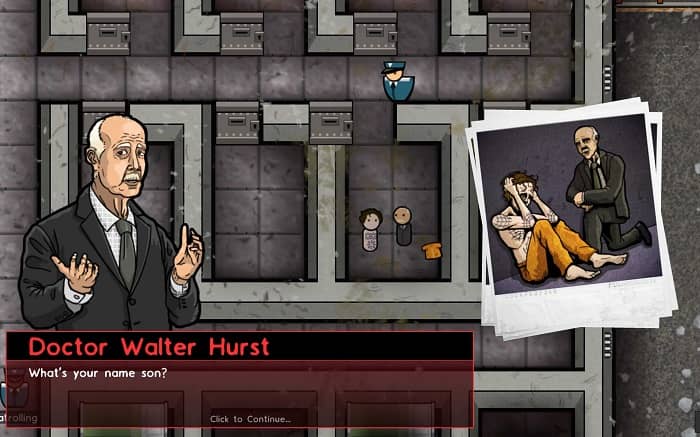 Despite the few bugs, I can’t praise Prison Architect enough: the fact that I’ve spent over 125 hours in the game pretty much speaks for itself. The mixture of construction and management simulation is balanced perfectly, and the gameplay is both enjoyable and rewarding; even at its most frustrating, it kept me wanting more. A longer, more in-depth campaign mode wouldn’t go amiss, but for fans of sandbox games it’s really a must play.

Now if you’ll excuse me, I have some mass murderers who need exercising.

Prison Architect is available on PC.