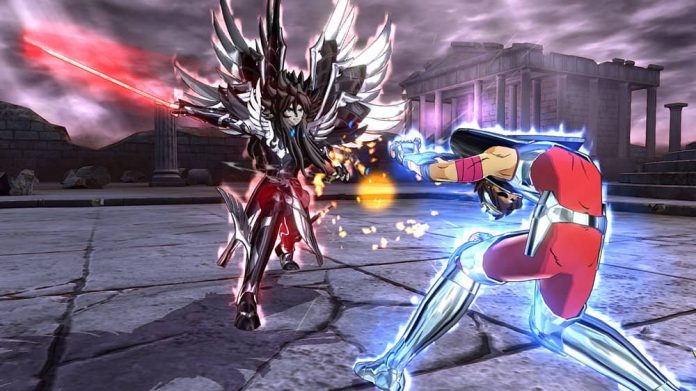 With their armour designs based on constellations, the cast of Saint Seiya have accumulated quite a following since they were let loose on the world in 1986.

A franchise that spans a wide range of media including manga, film, video games and even a musical(!), it’s surprisingly popular in France, where it is known as Les Chevaliers du Zodiaque, or The Knights of the Zodiac.

Centered around the titular Saint Seiya – one of 88 warriors sworn to protect the goddess Athena in her various reincarnations – the franchise’s stories are your typical Japanese high-drama anime affairs, with unlikely scenarios resulting in large amounts of fisticuffs where characters announce their special attacks with a furrowed brow. It’s all rather silly and ridiculous, but it’s charmingly entertaining, and its premise lends itself great to, let’s say, the beat’em up genre. Unsurprisingly then, that’s what this newest video game entry into the franchise, Saint Seiya: Soldiers Soul, is: a one-on-one fighting game featuring a huge roster of characters engaging in largely expositional conversations before beating the living crap out of each other. Phew!

Instead of aping the 2D combat of Street Fighter, or the 3D pugilism of Tekken, Saint Seiya: Soldiers Soul opts for its own distinctive style of 3D fighting action. With the left stick used to move your character freely within the perfectly square fighting arena, the square and triangle buttons can be used respectively to attack with weak or strong attacks, whilst the X button is used to jump and the circle button emits a ranged photon attack. Where the combat becomes interesting however, is when you begin to combine your basic moves with the use of the left and right triggers. 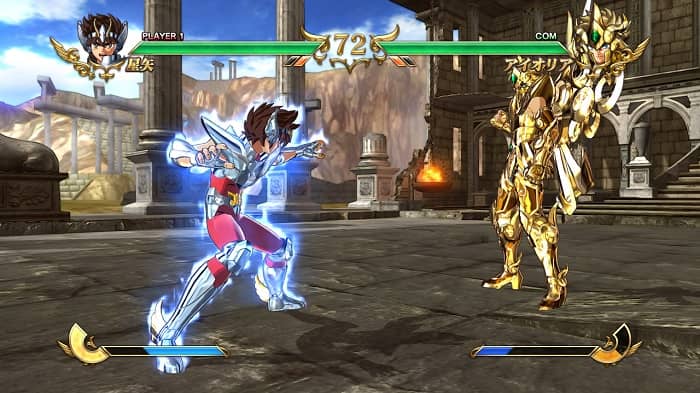 Perhaps the most important button in the game, holding the left trigger enables your chosen character to gain “Cosmo” – a valuable energy that fuels many of your most useful moves. The only trouble is, whilst holding the trigger to gain Cosmo your character is unable to move, so you need to strategically choose when it is safe to do so in order gain the upper hand in battle. Once you’ve accumulated the necessary Cosmo, using the left trigger in conjunction with the face buttons allows you to use extremely useful moves such as the launcher that sends your opponent high up in the air, or a homing dash attack that is great for closing distances and creating openings for combos. Alternatively, by using the face buttons in conjunction with the right trigger, you gain access to some flashy special attacks that are unique to each character.

Defensively, the left shoulder button allows you to block, and with a characters having a plethora of ranged and area attacks you should be ready to use it at all times. Consistently blocking for too long however is inadvisable, as eventually you will end up in a guard break state. If you sense your opponent is going to use a direct attack you can also dodge to either side, giving you the upper hand if performed successfully. When you do get hit with a combo or would rather use your opponent’s aggression to gain the upper hand, a “lightspeed” move can be performed by successfully tapping the right shoulder button just as you are about to get hit. This advanced manoeuvre costs Cosmo, but its ability to get you out of a tight spot means it’s usually worth the expense to get out of harm’s way and maybe launch a counterattack of your own. 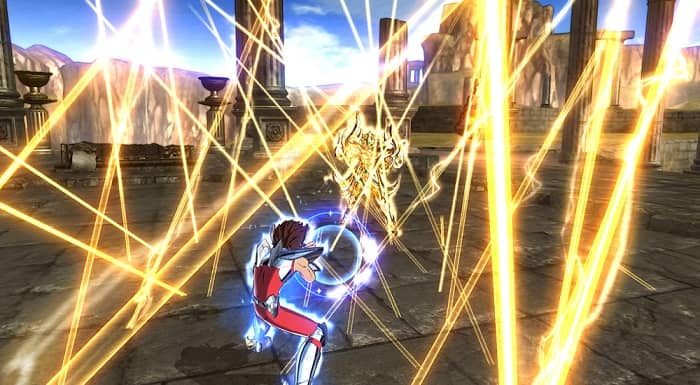 The final facet of the combat system is the “Seventh Sense” gauge that sits alongside the Cosmo gauge. Both attacking your opponent and receiving damage from them fills this gauge by various amounts, and once it is full you can unleash a Seventh Sense Awakening by pressing both the left and right analogue sticks in unison. When you are in this Awakened mode, you will find your abilities boosted for a set period of time, making this state somewhat of a table turner. More importantly however, it also allows you to use your characters super attack, which is truly devastating should it successfully hit your opponent.

On the whole the combat system works rather well, managing to create an experience that is both unique and faithful to the source material, but unfortunately there are a couple of issues that can frustrate. The main problem is that the characters are noticeably unbalanced, meaning the outcome of battles is heavily influenced by the match-up of characters rather than the player’s skill. The other gripe is that the free-moving nature of the combat combined with its fast pace and lack of lock on means it is sometimes awkward to successfully direct your attacks at your opponent, especially the special attacks that are quite often of a ranged nature. Whilst these issues can annoy, they aren’t game-breaking, and I still found myself enjoying the sheer craziness of the combat even after retrying a fight for nth time due to being matched up against an overpowered opponent. 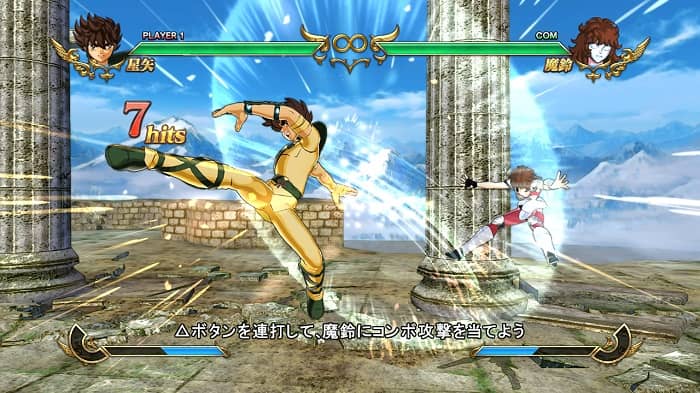 Unlike most fighting games, Saint Seiya: Soldiers Soul is geared strongly towards the single player. There’s a story mode with four lengthy campaigns to play through, a battle mode featuring exhibition matches as well as survival and tournament-like Galaxy War game types, and also a Battle of Gold mode which has you taking control of saints clad in powerful gold armour. Those who do like to fight against fellow human beings need not worry however, as an online mode featuring the usual ranked and player matches is also available, although the time I spent playing online wasn’t particularly great. Fights were frequently halted momentarily due to apparent network issues even though connections were strong, and even just a week or so after launch the player base is pretty much non-existent. If you have some friends locally you’ll fare much better with the game’s versus and galaxy modes which offer solid local multiplayer action.

Every fight you engage in throughout Saint Seiya: Soldiers Soul awards you points for your performance. Beat your opponent quickly without losing much health and you’ll be duly rewarded with a wealth of points multiplied by a modifier based upon your grade. The points are fairly useful too, as they act as a currency that allows you to buy unlockables such as Assist Phrases, which can be equipped to characters in order to boost their stats. Unfortunately, the Assist Phrases can’t be used in any of the story campaigns, which is a shame as this is where the game is at its most difficult and where the chance to increase your characters’ abilities would have been most appreciated.

With its roots as a PlayStation 3 title clearly visible, Saint Seiya: Soldiers Soul isn’t a particularly great looking game. In fact, apart from the character models that are moderately pleasing to the eye you could say it’s quite an ugly one, with its dull and lifeless environments and atrocious shadows. To be honest though, it doesn’t really matter. It may be unbalanced and a bit confusing at times, but this is a solid game with a wealth of content that any fan of Saint Seiya will consume with joy. Even those that have never been interested in the franchise before may find its combat thrillingly entertaining should they enter it with an open mind.

Saint Seiya: Soldiers Soul isn’t groundbreaking; it doesn’t push the boundaries of gaming in any way possible. It doesn’t seem to even try. But what it does do is provide hours of single-player fighting game fun.