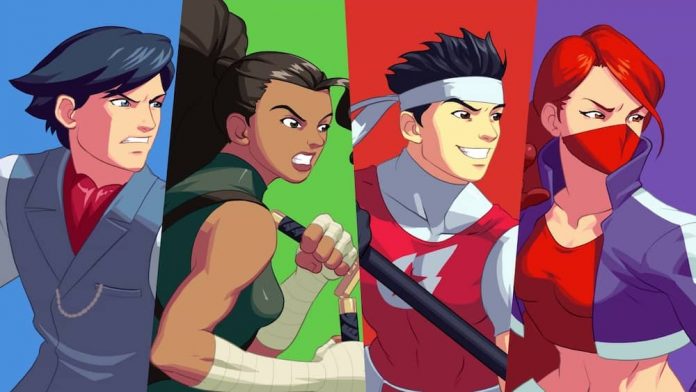 SkyScrappers, developed by indie game devs Ground Shatter, is an arcade platformer-brawler designed to take players back to the nineties. Compete with up to three friends, or against AI bots if you can’t find any, and reminisce of simpler times before photorealistic graphics.

Having originally played SkyScrappers at EGX last year, I remembered this game as being great fun; it really got my blood pumping with its brisk and competitive gameplay, and I have to say it’s managed to perfectly preserve these aspects upon release. Players are given the choice between a surprisingly small character roster, each associated with a game stage set in their home countries and equipped with a signature weapon (the weapon variants seem to be purely aesthetic with no actual changes in fighting ability). You’ve Phileas the British raconteur, a true gentleman armed with his rapier; Solène, the militaristic French woman whose weapons of choice are Tanto Daggers; the mysterious American merc, Jessica, wielding a No Dachi; and finally we’ve Kichirou, a daredevil from Japan who fights his battles with a Bo Staff. As I said, a very small roster.

The aim of the game is to either reach the top of a building first, utilising the debris that happens to be plummeting to the ground in order to gain altitude, or simply bring your opponents’ health to zero.  To perform the latter, you can either use melee combat or, alternatively, knock characters off of the screen to reduce their health far more efficiently, similar to Super Smash Bros. Melee combat is, however, very restricted with the one basic weapon swing attack alongside a ground pound move, other than that there are two special moves that players can perform once their special bar is filled. The special bar itself is positioned in the corner below a character’s health; it’s rather small and therefore difficult to keep track of which tends to mean players can accidentally activate their special seeing as it involves double-tapping one of two action buttons. The special moves themselves aren’t too exciting really, one’s just an AoE attack and the other’s a slightly higher jump that slows down time, which is odd because it doesn’t particularly add any tactical advantage. Scaling the building is fairly simple itself; players run along larger pieces of debris (the more vertical the debris, the quicker you’ll gain altitude) and jump at the opportune moment while smaller pieces are used to remain airborne for an extended period. 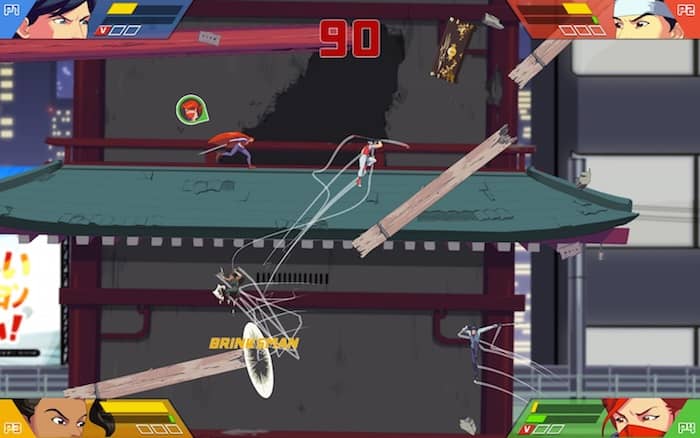 Whilst I’ve not come across any game breaking bug as of yet, there have been a couple that I found rather infuriating. Some debris doesn’t seem to be physically present as an entity and so I’ve fallen through it and, when this is a competitive game we’re talking about in which the main objective is to go up, this is particularly irritating. Another minor annoyance I’ve found is that some of the hostile, flaming debris, which you’re meant to avoid, has a wider hit-box than one may expect and that can actually lead to losing the round if you’ve little health left.

The 90’s retro style soundtrack, by the way, is perfect. That, paired with the echoing voice of the stereotypical announcer really brings back memories of that era (regardless of the fact that I missed it, being a wee newborn at the time). It really makes your hand itch for a joystick. The characters, alongside just about everything else, are all painstakingly hand-drawn and still wonderful. While the animation itself isn’t the most fluid in the world, it adds to the whole nostalgic feel. Though, the dialogue has let me down a fair bit, with humour that feels forced and a lack of proper punctuation it just feels off. 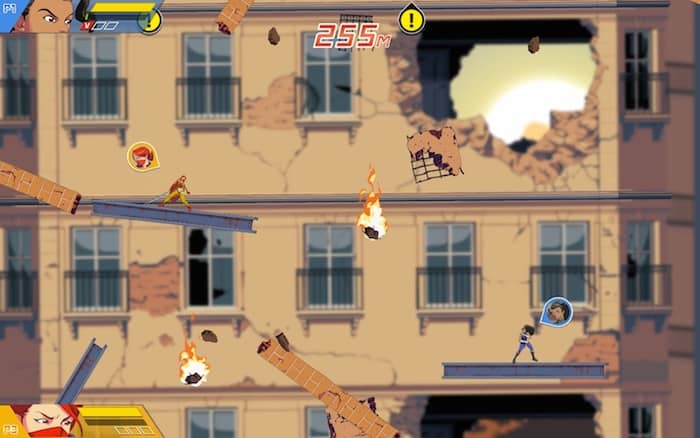 The gripes are only minor though, and it doesn’t take too much away from the entertainment value that SkyScrappers offers. At only £9.99 on both Steam and PlayStation 4, it’s one of the better indie brawlers out there, topping games like Divekick and Skullgirls in my opinion. It’s great fun to play with friends and, with a lengthy arcade mode as well as custom game settings when playing against bots, SkyScrappers has significant replayability and is certainly worth the money.

SkyScrappers is available on PlayStation 4 and PC. We reviewed the PC version.