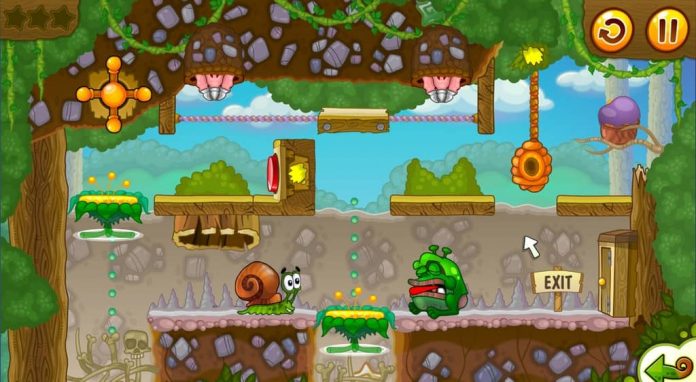 Snail Bob 2 is the follow-up to, you guessed it, Snail Bob.

Developed by Hunter Hamster and published by tinyBuild, Snail Bob 2 is a puzzler in the same mould as many, many other puzzle games available on your smartphone or Flash-game website of choice. But Snail Bob 2 does plenty to help it stand out from the crowd.

Now available on Steam, Snail Bob 2 sees you in control of the titular mollusc’s benevolent floating hand as you help to safely guide him through 90 levels (spread across 3 distinct stages – each with their own individual look and some fresh mechanics) full of fatal – and funny – obstacles. Don’t be confused by all of the other Flash-based Snail Bobs though – this is the second iteration of Hunter Hamster’s new and improved Snail Bob, available on iOS and PC.

As soon as you start your journey with Bob (by helping him wake up and get ready to start his snail-y day) it becomes obvious that Hunter Hamster really value great design and, something that I’ve found lacking in a lot of games of late, comedy. From the off there are laughs aplenty in Snail Bob 2: there are plenty of pop-culture references (some cleverly veiled and others… well, blatant doesn’t even begin to cover it), and the situations that Bob finds himself in and the humorous way that he manages to get out of them (with your help, of course) are certainly worthy of a chuckle. 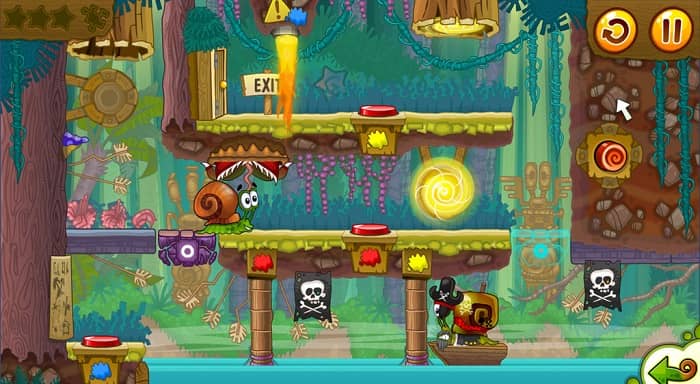 You can tell that a lot of thought and care has gone into the game design – the graphics are crisp and clear, the movement and actions feel smooth and each level is meticulously put together so that you’ll never be at a loss for what to do next (not for long, anyway). Bob’s journey is full of funnies but the jokes are spread out throughout the levels, ensuring that you won’t get bored of the comedy stylings while you play. There are little set-pieces, too – the tutorial levels have Bob feeding birds, drinking juice and taking out the garbage without a pause in the gameplay – that make it feel like you’re playing through a mini story, to say nothing of the incredible boss levels that await you at the end of every stage.

The three currently available stages (forest, fantasy and island) each have their own individual aesthetic and a number of unique gameplay elements and mechanics that are added and expanded upon as you play through the levels. Humorous cutscenes bookend each stage, offering a reason for Bob’s being in that stage and nicely wrapping up the story at the end, generally with one or more gags thrown in for good measure. The fantasy and island stages both culminate in a boss fight that takes the standard puzzle elements and switches them around so that you feel like you’re playing a Super Mario game in one and a side-scrolling shooter in the other. 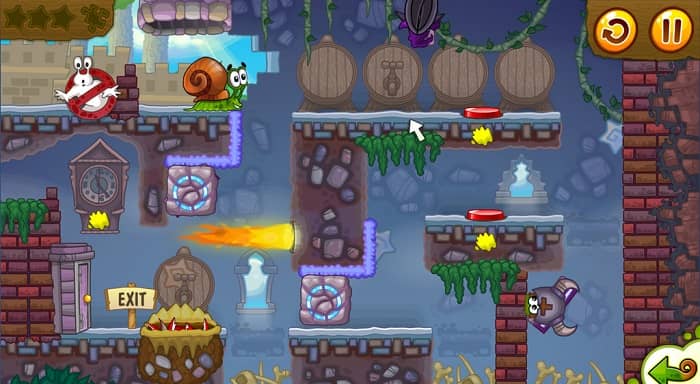 In regards to the puzzles themselves, there’s really nothing spectacularly new (apart from those bosses, that is). While Bob trundles merrily along in one direction on his own, you’ve got a few ways of influencing him: you can click on him to stop him in his tracks or you can force him to change direction with the click of a button. You’ve also got the responsibility of opening gates, switching switches and, in later levels, aiming and firing cannons. Though all of the levels in each stage have similar obstacles, more variety is added as you progress so none of the levels ever feel the same as the ones that came before. It’s obvious that the developers have spent a good deal of time thinking about engaging level design and it really pays off.

One thing that I often find annoying in some games was actually rather welcome in Snail Bob 2: in each level there are a number of collectible items – either three stars or three stars and a jigsaw piece. The stars go towards unlocking different outfits for Bob – again, Hunter Hamster have piled in the pop-culture references so you can dress your snail up as Mario, Elvis or a Vault Dweller (amongst others) – and the jigsaw pieces combine to create an amusing picture and reward you with bonus levels. Searching for the stars and jigsaw pieces can be difficult at times, as they blend cleverly with the backgrounds or are hidden behind objects that you need to interact with to reveal, but finding them is rather rewarding – so much so that, if I missed one, I would go back to make sure that I got them all – making Snail Bob 2 a puzzler and a hidden object game. 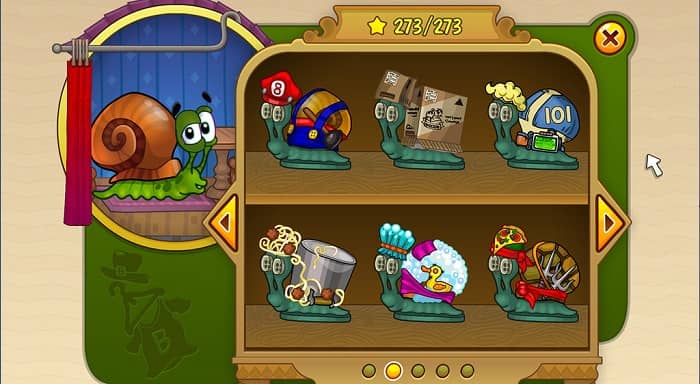 The game isn’t long, by any means, so all additional distractions are most welcome: in my playthrough, I managed to beat every level (including the extra levels that you get for completing the jigsaw for each stage) and collect every collectible in a little over two hours – and that includes making mistakes and generally taking my time – but this game isn’t really designed for extended plays. You’re supposed to dip in and out (a level here, a level there) until, eventually, you’ve completed the current levels and are ready for the next set to drop (Christmas stage, coming December!).

While Snail Bob 2 isn’t really bringing anything too revolutionary to the puzzle game, its excellent design, cleverly constructed levels and overall charm mean that it’s sure to appeal to anyone looking for a way to kill a few minutes here and there with a couple of good, strong belly-laughs thrown in along the way.

Snail Bob 2 is available on PC and Mac.