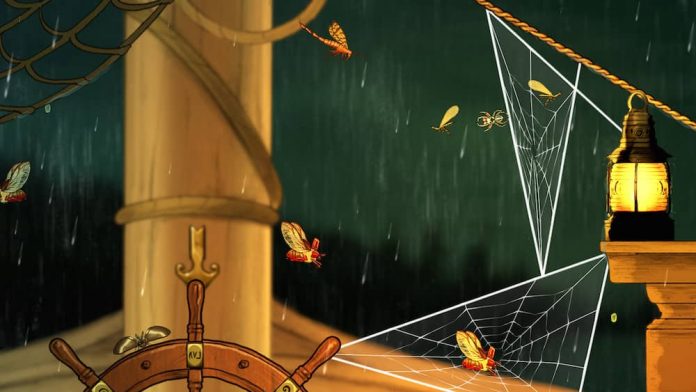 Spiders have a dark mysticism to them.

At a glance, they are as far away from a human as you can possibly imagine. They have eight spindly legs and way too many eyes, they can bite, they can be poisonous, and in the right environments they can be as big as your fist.

As a child, I had the good graces to have a sibling that instilled the fear of spiders into me from a young age by helpfully explaining that a spider will one day lay some eggs in my mouth as I sleep. Yuck. So it’s a good thing I’m about to review a game all about the world’s most loathed insects: spiders.

Spider: Rite of the Shrouded Moon is a preposterously titled indie puzzler from Tiger Style (who also made the fantastic Waking Mars) that features our very own real-world cthulhu beasts. It’s a game where you can scurry up walls, chair legs, table legs, picture frames, door frames, just about every kind of household item of furniture can be crawled over and webs shot all over the place to trap innocent, cute flies for you to devour whole.

Yes, that’s the game in a nutshell. And really, that’s truly all you’ll be doing. You glide across the darkened floors of a country manor to shoot webs and capture insects. Capture a certain number of insects and you can move on to the next room. Pretty easy stuff, really. It won’t win any awards with complexity (though it does give it a fair try with some fairly sub-par collectible objectives for you to roundly ignore) but what it really does well is give you that laid-back, play-while-slouching feel. There’s no danger or fail states, and any screw ups will place you right back to where you were again, ready to munch flies and suffocate bees. Is that even a thing that spiders can do? it doesn’t matter, you can do it here! 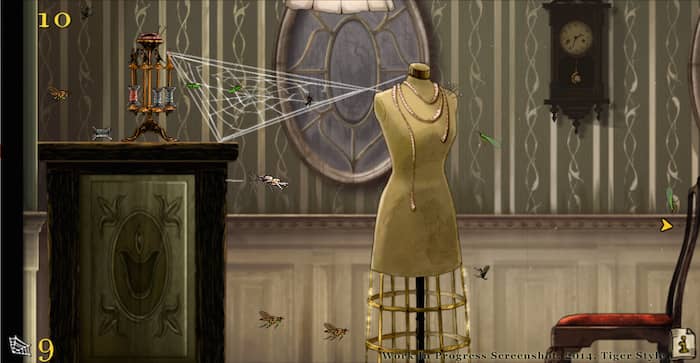 Aesthetically speaking, the game seems to take place within a recently abandoned farm house, complete with picture frames displaying the supposed occupants of the house, all of whom have left clues around their house in devious secret areas for you to discover. The game encourages you to find these secrets, happily giving the player purpose to roam around and explore, and actually stumbling across a discarded item of story inside the walls of the manor feels really uniquely secret, just like it did way back in the day when you randomly shot open a wall in Quake and found some glowing armour floating in mid air. It’s nice. Through this method, the story slowly pieces together, and it’s really well constructed. You are posited as this innocuous spider, mass murderer of flies, that just kind of innocently stumbles across this background story, and then just carries on its merry way, a knowing nod to the player, often trusting you to understand what’s going on even if your spider companion doesn’t.

The house is a wonderful and darkened country home, and is really the secondary character of the game. You can freely move between different rooms of the house, often sectioned away in a menu screen but nonetheless the game at least attempts to respect your explorative nature. Your way is guided by golden arrows. It’s not easy to get lost really; there’s only ever one or two ways in and out of a room but creeping around the hollow, cold corners of this house feels all at once voyeuristic and somehow like you’re jumping right into their graves. It’s deliciously spooky stuff. 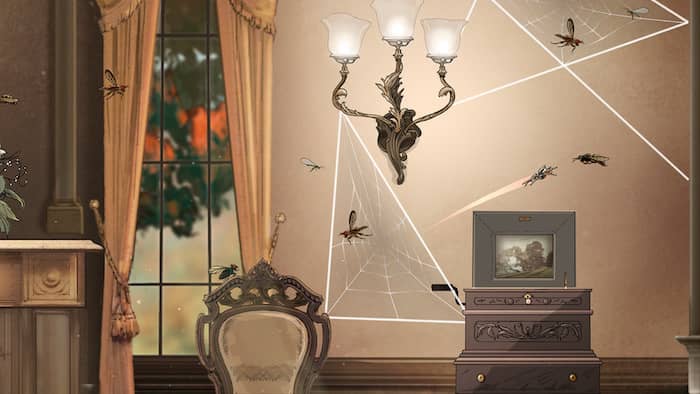 Spider also makes great use of your location services, meaning that depending on the time of day you play or the weather outside, your game will be impacted. I often played at night which meant the game was dark, brooding and often rained outside. This will change your game play in little subtle ways and gives you a little reason to play through the game again. Okay, it’s not exactly groundbreaking but it’s a nice addition that gives some much-needed spice to the proceedings. And played at the right time in the evening, like I mostly did, and you’ll get the right mix of dark visuals blending in with the beautiful, contemplative soundtrack that accompanies the game. They are often low-fi, electronica but backed up with melancholic melodies – it somehow really fits the downplayed atmosphere of the game and it makes being a little spider feel like an existential, out-of-body trip.

So far so good. But if I could complain about anything I’d say there’s a real lack of depth in general. It seems a lot like it would be a mobile game, which is fine, but the webs you weave are often diabolical four-sided atrocities, an affront to any self-respecting spider. The layouts of the maps don’t necessarily lend themselves well to complex spider webs; you just wind up drawing a box or a triangle around the general area of the bugs in the hope they’ll wander into your midnight snack death zone. It’s not a game-breaker but it really feels like the webbing was simplified so people with fingers can smudge their tablet or phone screens easier when spinning a web. On top of that, it tries to pad out the gaps with rather silly collectible objectives, the kind of thing that is rapidly going out of style these days. On top of, y’know, eating to survive, the game will also ask you to collect a small handful of other objects too. I mean really, are we still doing this in 2015? It feels really lazy to shovel these gap-fillers into what could be a really nicely constructed puzzle platformer. 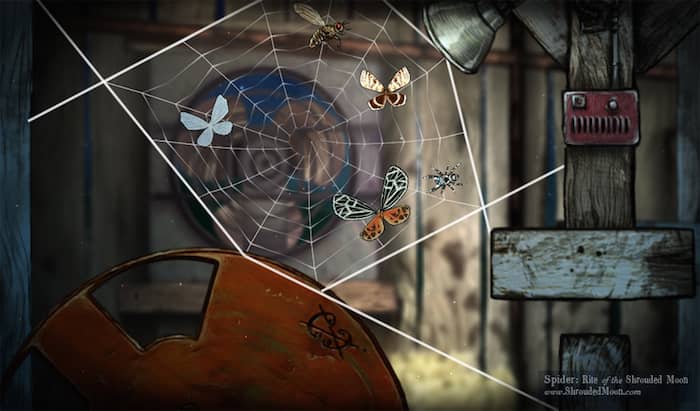 But I digress. the negatives aren’t much to complain about, especially for a low budget indie title such as this. Spider: Rite of the Shrouded Moon is an earnest stab at easy-going gaming. It gives you some simple objectives, and some simple mechanics, and lets you take it easy with a beer in your hand as you play. Not bad going at all.

Spider: Rite of the Shrouded Moon is available on PC.