Born from the Rezzed 2013 gamejam and recently released on Steam, Tango Fiesta strives to condense the entirety of 80’s action film into a single co-op arcade shooter.

While playing with mates can be a barrel of dumb fun, the barrel is slightly rotted and unstable, and it’s full of annoying splinters that stick in your bum. (I mean there are some bugs and gameplay issues, was that clear?)

It was only after I picked up Tango Fiesta for review that I realised it was a co-operative focused twin-stick shooter, themed as a homage and parody of 80’s action films. Having no friends and being born in 1995, I couldn’t help but feel like I had made some kind of terrible mistake. All the references to Rambos, Commandos, Robocops and Terminators would all go straight over my tiny embryonic head; plus in single player mode, I can’t even forcibly laugh in front of my friends to prove I get the jokes – “HAHAHA HE SAID ‘GET TO THE CHOPPER’”. Well anyway, I put my brave face on and dove right in, and after playing through the game I can honestly say that surprisingly, I still feel like I made a total mistake.

The twin-stick style of Tango Fiesta carries the ever fashionable retro appeal, and furthermore it is genuinely refreshing to see a retro-style top-down shooter that doesn’t use pixel art graphics. The cartoony aesthetic employed is far more original, and probably allowed for a more accurate imitation of the classic films it’s parodying. The soundtrack is also surprisingly decent, with catchy rock melodies that compliment the general theme of old school 80’s action (even more so when it glitches out to technical bugs and crashes, which happen a bit too often). And while some tracks can become slightly repetitive, it’s not really a problem when compared to repetitiveness of the gameplay. 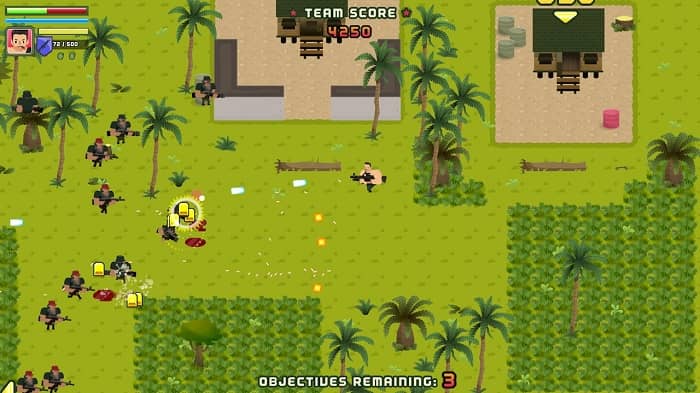 The mechanics themselves are, for the most part, entirely standard for the genre: take (A) enemies and bosses and destruction objectives and (B) guns and knives and grenades; and introduce group B to group A. But it’s done in a way which is often too clunky for me to look past. In this day and age is it really acceptable to only allow us to aim in the eight principal directions, instead of giving us full 360-degree mayhem control? It was embarrassing the number of times I was mashed to a bloody pulp because of the bastard enemies who could somehow constantly remain in the radial segment between “up” and “up-left”. It’s a problem that makes most of the starting weapons pretty useless, and even when you collect enough coins to buy upgrades, you’re basically doomed if you use any gun which only fires in a straight line (almost all of them).

The story serves its purpose of vaguely connecting each procedurally-generated level to the next, but unsurprisingly it’s not going to be taking the Booker Prize any time soon. A narration of events is provided between levels by an older version of the game’s main protagonist John Strong, thereby presenting the stages as if they are flashbacks. Strangely this is still the case even if you’ve chosen to play as a character other than John, which makes it feel like each narration is proceeded by a segment in which someone is blowing up helicopters for entirely unconnected reasons. 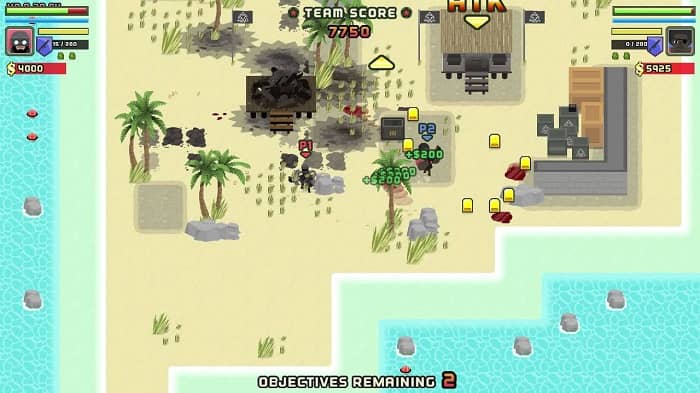 I wish there was more to say, but in truth, if you want a brainless little arcade game for some local co-op fun you can probably do worse than Tango Fiesta. On the other hand, you can also do better. It’s uncomplicated, there are explosions, and err… actually, that’s probably all you need to know. And while it may achieve the singular simple task of “being enjoyable when experienced with friends”, it just cannot compare to other games with a similar focus, such as Free Lives’ Broforce (another co-op retro-style 80’s action parody game).

You can’t just stick a load of clunky mechanics and old movie references together and expect it to hold up just because it’ll mainly be played by drunk frat boys who, in that state, would probably find it just as hilarious to watch a documentary on the Armenian genocide. To quote Rambo: “Live for something, die.. die for..” Hang on… “Die for nothing, live.. live like war…?” I haven’t seen the film.

Tango Fiesta is available on PC.