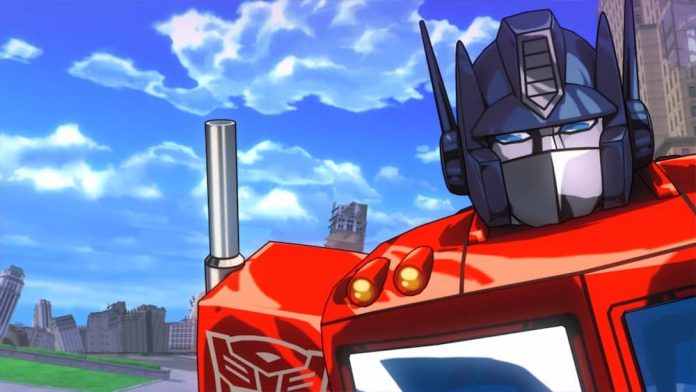 I was a child of the 80s and 90s. I grew up with the Transformers cartoon series in my eye holes every Saturday morning and that has made me the man I am today: socially awkward, emotionally stunted, harboring a borderline unhealthy hero complex.

You might think that sounds awful but try to imagine what your children, weaned on the Michael Bay version of this classic franchise instead, will be like when they grow up. That’s right, you did this to little Suzie, to little Johnny. You did this when you brought them into a world where you bought that ticket to Dark of the Moon, knew what a terrible mistake you had made, then went to Age of Extinction anyway. You are history’s greatest monster.

Thankfully you have a chance to atone because you also live in a world where Platinum Games was given free rein to make a Bayonetta-style character action game using the original Transformers license. The result is Transformers: Devastation and it might just be the best Transformers thing ever. If you own all four Transformers films on Blu-Ray but not the 1986 animated film with Orson Welles voicing a fucking transforming robot planet then this is your chance to realign your karma so listen up. 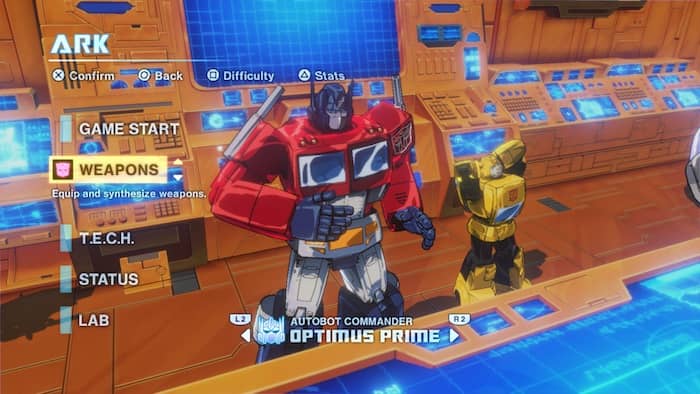 Transformers: Devastation takes its cues from the numerous Platinum-made games before it, but plays very closely to last year’s hotly debated game of the year contender Bayonetta 2. In the intervening year Platinum has taken the time to put a spit-shine polish on their entire combat system and adapt it perfectly to a kind of high-octane action the Transformers have never seen before. Combat consists entirely of rushing headlong in to a group of evil robots and laying down a near endless combo string using a series of light, heavy, and ranged attacks while dodging a screen filled with incoming fire and melee assaults. You can switch in to vehicle mode at any time by holding R1 which will allow you to zoom about the arena in car form (no flying Autobots, unfortunately) and pick up speed which you can then unload with an attack that will switch you to robot form and stagger your opponent, opening them for a flurry of strikes that will hopefully end in another transformation so you can zoom off to your next target and start the process all over again. To complicate things you’re given an on-screen prompt in the form of a flash of light to let you know that an enemy is about to launch an attack. Time your dodge by tapping R1 at just the right moment and you will enter “focus mode” (essentially “Witch Time” from the Bayonetta series) which will slow down time and give you a few precious seconds to finish your combo in safety.

I can’t adequately describe how satisfying this all feels. Platinum has somehow managed this perfect combination of tangible weight and absurd, floaty, arcade-like physics. Every time you rush in at full speed, transform in to a devastating uppercut only to transform back and perform a high-speed ram, fire four or five shots in to that Decepticon’s face, transform in to another ram, lay down two light attacks, dodge in to focus time, drop the end of your combo string, and ram them in to an exploding mess of shredded scrap you’ll speed off with a smile on your face knowing that the next sentient robot you target must be electrocuting its pants. There’s also some basic third-person shooting you can partake in but it’s not much fun on its own and serves its purpose best when used to extend a massive combo. 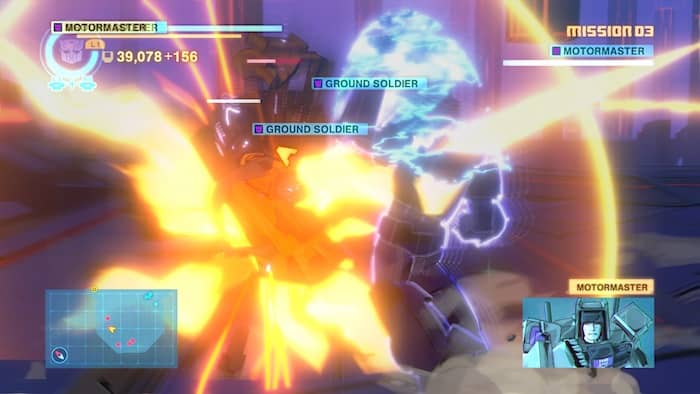 There are just a few minor issues that can get in the way sometimes. The lock-on that happens when starting a combo string can occasionally be imprecise and either miss (even though you clearly made contact with your opponent) or fail to properly activate the prompt for the next step in your string. This is especially true with aerial targets that will often force you to face them using the lacklustre ranged combat mechanic since starting a combo in mid-air is iffy. Enemies can also block and counter you at random which I understand from a difficulty perspective, but not knowing if you’ll be able to pull off your planned combo on a target that you successfully staggered feels needlessly annoying – especially when they block you multiple times in a string and completely screw up your rhythm. Focus mode is also way too short, allowing for just an attack or two before you return to normal time. It’s not really enough to power your way through a combo before you’re forced to dodge again. Also the sheer amount of particle-effect fueled chaos on-screen can often make discerning a prompt to dodge nigh impossible, leading to far too many cheap shots in the midst of a crucial fight. Still, these problems do little to mar what is otherwise a stellar experience from a game play perspective.

You’ll also be taking part in some simple racing and on-rails shooting segments. Both are handled capably but don’t really add much to the overall package other than breaking up the pacing a bit which can be welcome when you start to feel worn out on the combat which doesn’t really let up otherwise.

The story feels right at home in the Transformers G1 universe and the writers at Platinum should be commended for making something smart and entertaining but not so smart that it divorces itself from the campy moralising of the original cartoon series. Megatron is at it again and this time he has his eyes on a massive power source he plans to use to cyberform Earth, making it more habitable for Cybertronians while killing all sentient organic life. You might recognise this as the plot to every episode of the animated series ever but that’s precisely what makes it so great. It fits right in to the canon somewhere in the late series just before the animated film (which is delightfully referenced at certain points) and it deserves that spot by being the most faithful recreation of source material I think I’ve ever seen in video games. The voice actors are all either from the original cast (including Peter Cullen as the indispensable voice of Optimus Prime) or doing spot-on impressions that I can’t distinguish from my memories. There are also some really clever one-liners here and there that had me chuckling out loud, and an ending that got me a little teary-eyed for the moral simplicity of this relic of a by-gone age of television programming. It’s solid work throughout and though it all clocks in at right around five hours, that turns out to be a blessing as there’s absolutely no filler to be found here. The whole thing kicks off with a battle against Megatron and then proceeds to throw a steady stream of the best that the Decepticon and Insecticon rogues galleries have to offer at you for the entire running time. All this is wrapped up in a cel-shaded visual style that looks like your Saturday morning childhood brought to life in full motion. 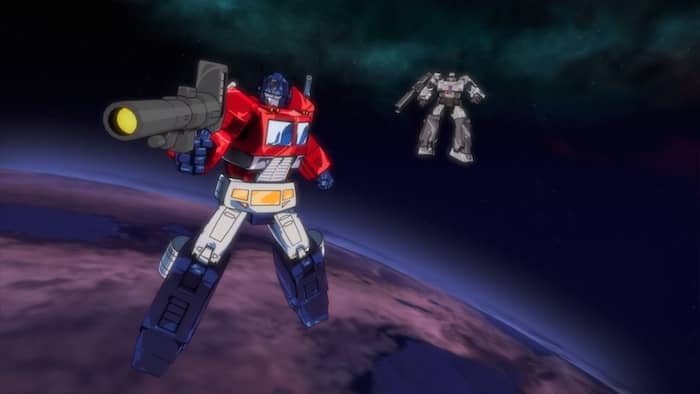 There are just two large maps that split up in to two zones each and reveal themselves in a fairly linear fashion. There’s some exploration that can be done between each new encounter that will have you finding little side-challenges and chests of loot to collect but this isn’t a wide-open world; it’s built to push the story forward to its conclusion.

Speaking of loot, I initially thought the inclusion of a loot system would end up being a throw-away feature that Platinum tacked on to try to pay some lip-service to the idea of extending play time, but it turns out this is the thing that’s keeping me invested long after laying the final smack down on Megatron. There’s a litany of ranged and melee weapons for you to collect, both generic and iconic, all with elemental attributes, ratings, and skills that can be tweaked to fit your particular play style. If you like a piece of gear that dropped you can use other low-level junk you’ll never touch to “synthesise” the weapon and level it up, possibly adding some new skills to it in the process. It’s basic free-to-play gamification but I’ll be damned if it isn’t addictive as all hell. The only problem is there’s no mass synthesis option, which makes the whole process a time-consuming slog. There really should have been some streamlining done here.

The Ark (the Autobot’s base of operations) also contains a laboratory where Wheeljack can further upgrade your gear. Drop a few credits and you can play a quick stop-the-slider mini game that will leave you with a piece of tech that can be equipped to your Autobot of choice to boost his statistics and abilities. There’s also a store on the Ark where you can sell unwanted equipment, tech, items, and purchase new moves to expand your combat options. All this tweaking and combining and equipping adds a surprisingly robust RPG-like system to Devastation that I didn’t think could work in a Platinum action game, but they’ve clearly proven me wrong in that regard.

To further extend replayability after the first few chapters your roster of playable Autobots expands to encompass Optimus Prime, Bumblebee, Sideswipe, Wheeljack, and Grimlock. That’s a whole lot of playable Autobot and each has their own unique feel and play style. Combine that with the fact that some of the iconic weapons can only be equipped to certain characters and some achievements and unlockables require you to beat every chapter as each character and I think completionists will have plenty to keep them busy for quite some time. And all that’s before the 50 challenge modes that will task you with fighting, racing, and shooting it out with deadly combinations of mobs and bosses that aren’t found in story mode. 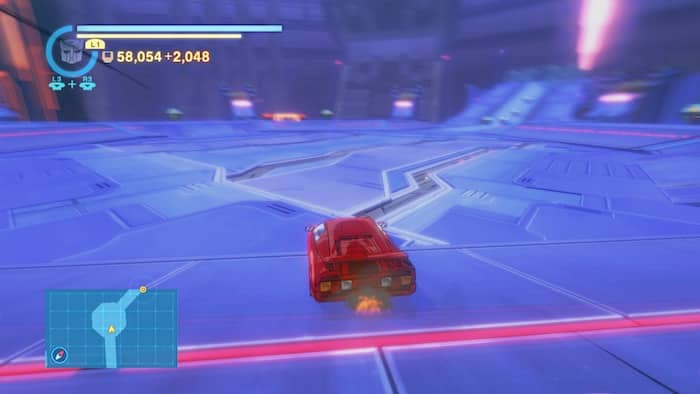 Transformers: Devastation wears its namesake well, and Platinum Games has managed to produce not only the finest video game the Transformers franchise has ever seen, but also iterated on their own signature design in a way that feels every bit as fresh as the unassailable masterpiece they already created with Bayonetta 2. Sure it’s short and it carries some awkward baggage with it, but Devastation went from a planned trade-in to a definitive keeper for me in a matter of hours – and that’s something that only the very best of this genre has managed without testing my patience to the absolute breaking point. If you love Transformers it’s a must play, but even if you don’t you should probably check it out.

Transformers: Devastation is available on PlayStation 4, PlayStation 3, Xbox One, Xbox 360 and PC. We reviewed the PlayStation 4 version. Order your copy now from Amazon.