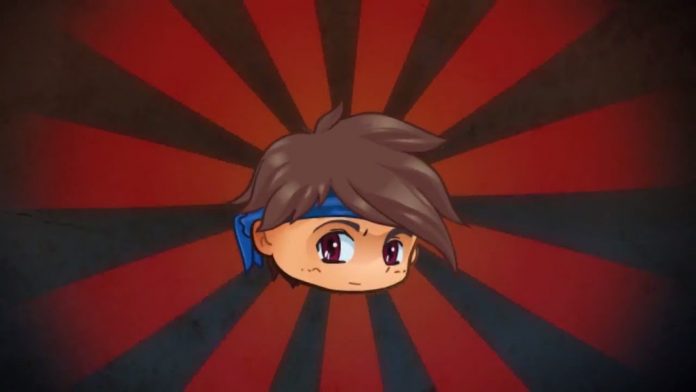 Imagine you’ve got three separate objects in front of you.

One’s a bog-standard trivia game, the type where you answer reams of multiple choice questions until there’s none left. Another is a beat ’em up game; one-on-one, the kind you kick your opponent into a bloody mess for no good reason. The final object is a dojo… you know, for some good old authentic Japanese martial art culture. Now imagine you stick all three in a blender and mix ’em up real nice.

No, this isn’t an episode of Will it Blend? (because, let’s be serious here, how are you going to stick a dojo in a blender? Unless it’s a giant blender… or a dojo for ants… but let’s stay on track. It’s a metaphor, people!). I’m actually talking about Battle Trivia Knockout, a PS4 game from Happy Dance Games that attempts to blend these elements into one small party game package. It may sound like a bit of a crazy combination – and crazy it is – but it’s the good kind of crazy, the kind that makes you chuckle to yourself, shake your head in semi-disbelief, but dive straight in anyway.

Battle Trivia Knockout is a game for one to four players, and works best as a party game with the full roster sat in your living room. If you fancy a bit of trivia practice by yourself, you can play against CPU characters, but half of the fun is being pitted against your friends. The whole game is presented as some kind of Japanese gameshow, with terribly over the top, but nonetheless hilarious, voices reading out the questions and introducing each round. There are four game modes, each of which can be played separately, or in a full game where you’ll cycle through a round of each. Every round is played out in a “bracket” system – so four players will start off in two head-to-head matches, with the winners of each round going on to the final. It’s a nice system that has been implemented well, although it’s a shame that if two people are wanting to go head-to-head you can’t just jump straight in without first having to be matched with CPU. 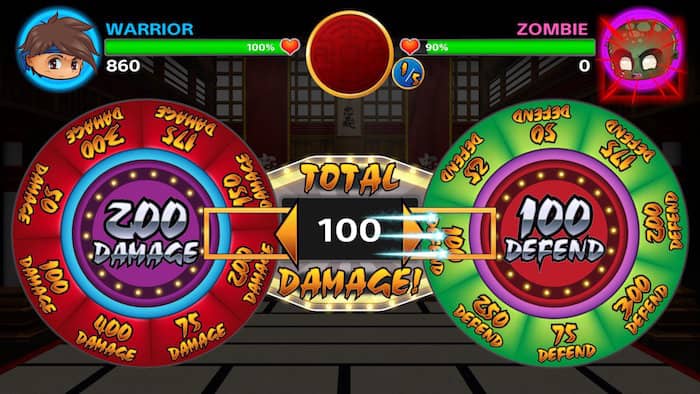 The crux of each of the four game modes remains the same: answer the most multiple choice general knowledge questions correctly, but the delivery of each is different. This is where the “beat ’em up” elements of the game come into play – after every correct answer, you’re given the opportunity to damage your opponent, potentially knocking them out for an early victory. In “Wheels of Destiny”, the first player to answer the question correctly is given an Attack Wheel to spin and determine how much damage they’ll attack their opponent for. The loser is given a “Defend Wheel” to counteract the attack – i.e. the attacker might spin 200 damage, but the defender then spins 250 defence, so no damage will be taken. “Answer Battles” is more of a test on your button-bashing skills: the answers are presented on a slider, and you and your opponent must repeatedly tap the corresponding button to slide it over to your side of the screen. Wrong answers will cause you damage (and correct answers may cause you finger strain…). The next mode, “Tiles of Death”, presents you with a screen of tiles after every correct answer – you turn over tiles until you find one that damages your opponent. Lastly is “Wise Wager”, where no damage can be taken, but you simply choose the amount of points you want to stake for each question. Get it right, and you win the amount of points you’ve chosen, or get it wrong and lose that amount.

The trouble with Battle Trivia Knockout is that the battle elements have very little impact on the actual gameplay. They give the game a unique and interesting presentation, without a doubt, but when it comes down to it, damaging your opponent generally does very little to sway the game at hand; everything falls down to your score, which is completely separate from damage. If you do manage to get your opponent’s health down to zero, you will win regardless of score, but with only five questions per round, it’s hard to do – and, you’d likely win anyway, having got all the questions right to initiate the damage in the first place. It doesn’t matter too much though: it’s still a fun concept that makes a run-of-the-mill trivia game much more entertaining. 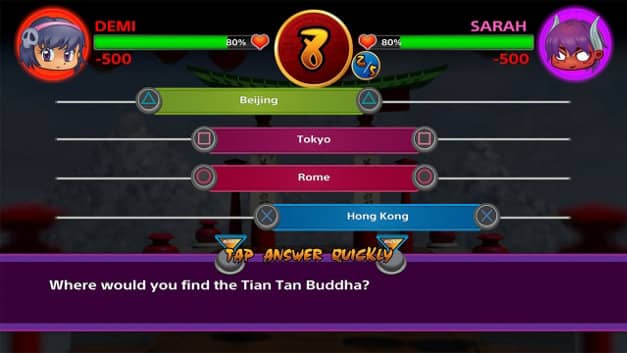 The questions in the game are very mixed – some are pathetically easy (What is the capital of France? What is the respiratory system responsible for?) whilst others are ridiculously obscure (Which country has the best broadband infrastructure? What country has the largest prison population in the world?), though as true for any quiz game: “it’s only easy if you know the answer!” Whilst it is frustrating when all questions in one round are difficult, it at least means it’s not so easy that it’s boring, and adds to the competitiveness – especially when playing with a group of friends.

With a lack of decent party quiz games on current generation (just what happened to Buzz! and Scene It?), Battle Trivia Knockout fills a nice gap in the market. Its presentation is fun and makes what would otherwise be a dry question and answer game into an entertaining party piece that anyone can enjoy. It’s a shame the battle elements don’t carry more weight, but ultimately it doesn’t take anything away from the enjoyment of playing.