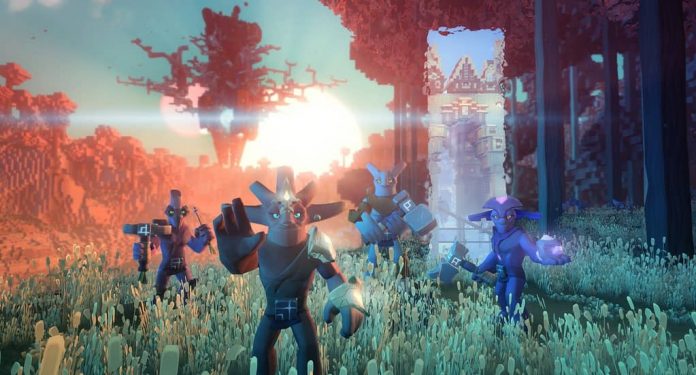 I can charge people to have a wander around my space-zoo.

Although we may have only seen roughly two minutes’ worth of gameplay and gathered a very small amount of information; I believe that this could be the game to actually do it.

Boundless has got huge ambition and attempts to gather everyone who plays under the same roof. No matter what platform you play the game on, everyone will be playing together on one mega-server; PC and PS4 gamers unite! 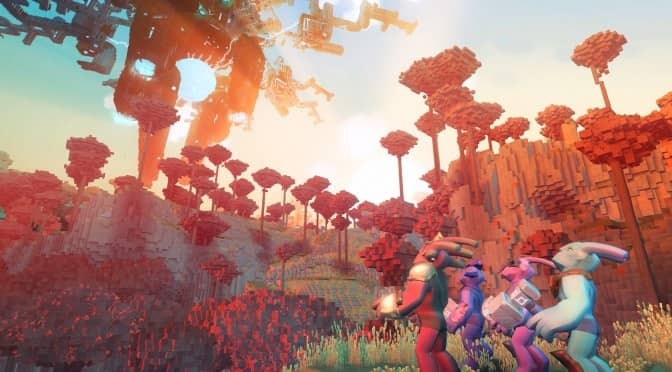 I haven’t played a cross platform game since Shadowrun on Xbox 360 – highly underrated – and I like the idea of being able to share my experiences with my friends who don’t own a gaming PC. These sort of games are best enjoyed with friends and they are opening up a key avenue with cross platform play – good stuff.

Boundless aims to offer procedurally generated worlds which are open for you to explore and ultimately choose to settle down in. If there’s something about your current world that you’re not a fan of, you can build yourself a Portal to warp straight to a brand new part of the universe; swap an acid rain wasteland for a luscious farmland. When you find the area that’s perfect for you, you can claim it using a Beacon, which means it’s officially yours, and only you can make changes to it.

Guilds can be formed with your pals, so you can go and do some crafting or hunting together. Perhaps you might even find yourself doing battle with other guilds?

Seemingly inspired a little by Terraria, and even Shadow of The Colossus, are Titans. If you’ve done enough farming for the day, you might want to consider gathering a bunch of people and slaying these hulking giants. Each world has its own Titan for players to discover; on your own you’ve no option but to try and escape the threat of the Titan, but with a team behind you, you might just stand a chance at victory.

Defeating a Titan may grant you some very valuable loot, allowing you to craft all manner of cool items. Their “mechanical guts” can be used to build airships, useful tools and other contraptions of varying ingenuity. 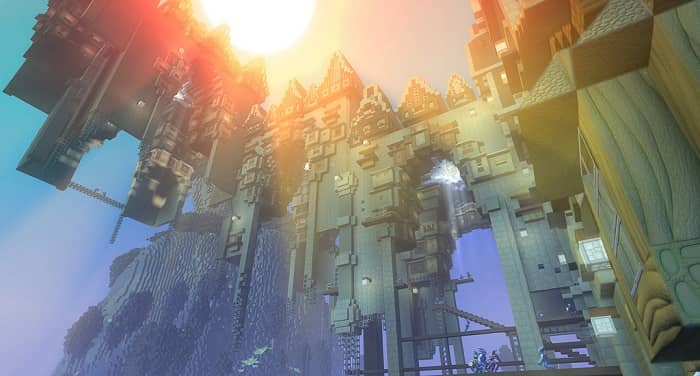 Now this definitely strikes me as fantastic. Just like Terraria gave me motivation by chucking in tons of incentives – bosses and dungeons to name but a few – Boundless aims to do the same. It seems to me as if they are looking to take the generic Minecraft formula, rewire it, throw in their own spin on things, chuck in some great MMO and RPG elements and give you so much more.

Boundless also aims to develop a thriving economy that’ll add more immersion in the game world, but also allows you a shortcut to goodies that may have required some manual labour you weren’t prepared to do. You can even become a real-estate agent, charging people for land that you have accrued; or craft a people cannon. Perhaps the most exciting aspect will be the relationship that the players, economy and the gameworld will share. Who knows what new dynamics will emerge when players find new ways of making money, or new loot suddenly emerges? It evokes very fond memories of the World of Warcraft auction houses, along with the old-school days on Runescape, standing in a bank and selling lobsters for hours on end.

It really does have all the offerings of a blockbuster game that may even rival my love for Terraria. I believe that this game can succeed because it adds so many great ideas to an exciting framework that has insane ambition, but most importantly will keep me coming back to a world that offers a stupid amount of things to do ; which can only keep on growing as it’s users create content and developers patch the game over time.

You can find out more about Boundless over on the official PlayStation Blog.

Boundless is expected to release sometime next year. Keep coming back to GameSpew for all the latest.