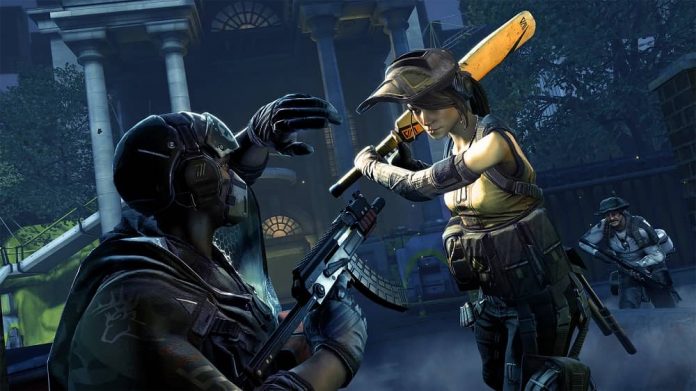 Hands up if you played Brink. Anyone? No, just me? Yeah, I don’t blame you. For all its nice ideas, the basics just didn’t add up. But Splash Damage are taking another swing at the formula with the free-to-play title Dirty Bomb. Can they make it work a second time around?

Set in London after a radiological attack, Dirty Bomb has two teams of mercenaries facing off against one another to complete various objectives. Each player will choose up to three of them to take into each battle. Each merc can be equipped with load-out cards to give small boosts and different weapons. The mercs are nice and varied, each with their own special abilities and play style so you’ll quickly find a few favourites. For example, the “Rhino” has a portable mini-gun and lots of health, “Aura” is nimble and can deploy an area of effect healing station, and “Bushwhacker” can put down a sentry turret and use objectives much quicker than other classes. The free-to-play catch is that everyone starts with the same two unlocked and an another three are rotated every week. If you want to unlock a mercenary to use all the time, you’ll need to either save up in-game credits or cough up some real money.

There are three game modes available currently. “Objective”, where one side attacks while the other defends, “Stopwatch”, the same as objective but the teams swap sides and have to beat the attacker’s score, and “Execution”, where players fight over several rounds with one life each, taking turns to try and plant a bomb. 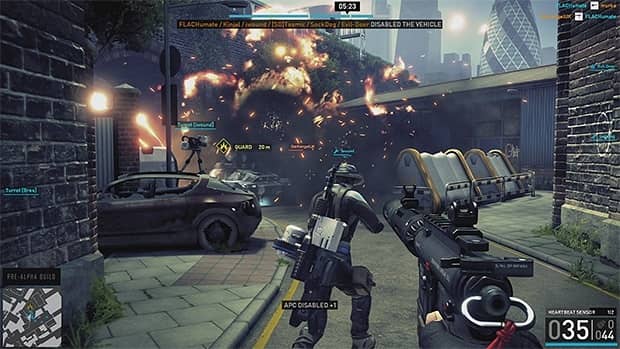 The gameplay has a very arcade feeling to it. Guns have little recoil and you’re encouraged to continually keep moving and wall jumping to be a harder target. Unfortunately, the maps themselves are rather tightly packed in a lot of places so it can often turn into a meat grinder, and since everyone has access to the “Skyhammer” merc, constant airstrikes are a possibility. Players are encouraged, and rewarded, for playing to their classes strengths. If you’re not an objective specialist, it’s going to take ages to disarm that C4. Respawns are tied to a global timer and you generally spawn far from the front lines so medics are naturally encouraged to play to their class. Since you get loads of XP for healing and objectives, along with missions and post-game score giving you credits, you can still have fun and contribute to your team’s victory even if you’re not a dead-eye shot.

I’ve put 50 hours into Dirty Bomb and I can’t say I ran into any bugs. Sure, there are a few balance issues here and there: at one point, if you weren’t playing Phantom or Nader, you were pretty much dead, but as the game is technically in Beta I suppose these things are to be expected. As it stands now though, every class currently feels useful and none feel entirely required for victory. There can be issues simply due the free-to-play nature of the game in that one team can compose entirely of the free mercs, while the other can outclass them by having greater variety. 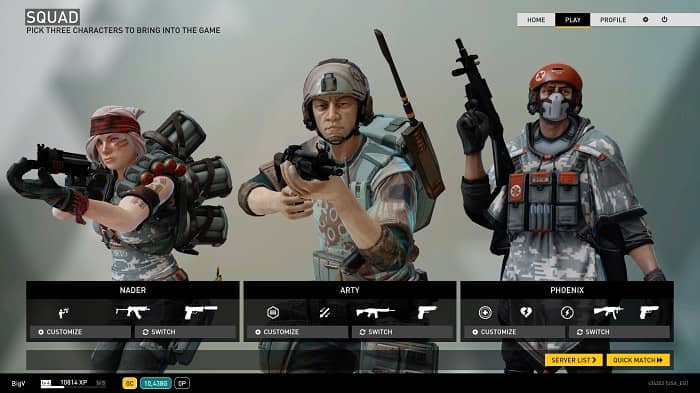 Graphically, I have no complaints about Dirty Bomb. It’s nothing special but it has a distinct art style and each character can be identified at a distance which is good. It’s well optimised too; I got a respectable framerate on my mid-range laptop and on the desktop (i5 with Radeon R9 380, 8gb RAM) it never dropped below 60fps.

If I have any complaints, it’s that the loadout card system is just a pain. You spend in-game credits to get a random card. It can be something useful, or it can be utterly terrible, although more often than not it’s the latter. You can trade in cards to upgrade them to rarer ones, but these are also random and the credit cost scales exponentially. The only thing that saves this from tanking the whole game is that the cards are more useful for the weapons you get rather than the bonuses – which are thankfully only small boosts or side grades such as being able to wall jump a third time. You get loadout cases just for playing anyway, so you’re just as well saving you credits to unlock mercs.

Overall, I’d recommend giving Dirty Bomb a go if you enjoy class-based team shooters. There is nothing amazingly special about it, but Splash Damage have finally nailed the formula they have been refining since Wolfenstein: Enemy Territory. I never felt pressured to spend any money and you can easily unlock a merc with a week or two of casual play. The mercs themselves rotate frequently enough that you’ll get to try a few quickly. For free, there’s no reason you shouldn’t jump on in and give it a go.

Dirty Bomb is available on PC.