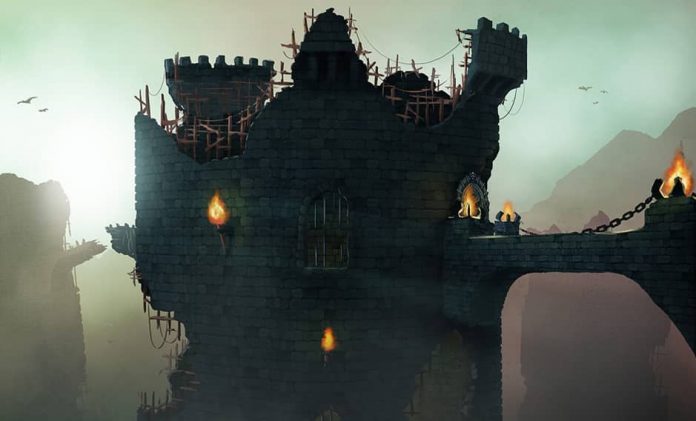 Beta Dwarf’s co-op arcade adventure game pits you against hordes of bothersome whelps before allowing you to take on a variety of unique boss monsters or, going by their occupation, “Guardians”. You can either face this peril on your lonesome or wise-up and enlist the help of up to three friends.

Forced is a top-down co-op arcade adventure game with puzzle elements in which you play as a gladiator, battling through the Hall of Trials in order to earn your freedom. Balfus, your “Spirit Guide”, accompanies you as you cleave through those who deny you your freedom, offering helpful tips as well as the ability to activate shrines which either gives the character temporary perks or hinders the enemies. Shrines range from those that heal to those that cause Balfus to become a flammable ball of explosions and excitement.

The game is split into several branches, each branch being a set of “Trials” leading to that area’s boss. Trials are basically the stages where the actual gameplay takes place; it’s almost like a horde mode except the aim is to complete a checklist of tasks which can involve solving a puzzle, defeating a certain amount of basic enemies or bringing down a stronger enemy type. Prior to confronting each Trial, players must choose between four base weapons, each with their own interchangeable passive abilities and special attacks. You’ve got your standard ranged class, with the bow and arrow; the roguish archetype which concentrates on swift attacks with dual-wielded daggers; and then the others which could both be considered warrior-like classes although one is better for cones of attack whereas the other more for concentrating damage onto one combatant. 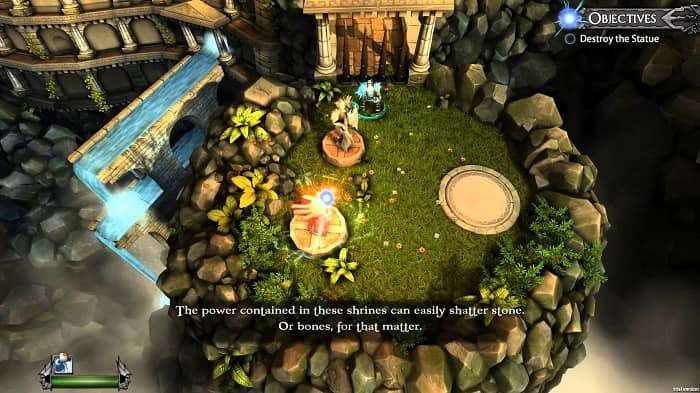 Something that stood  out straight away is the phenomenal voice acting for Balfus in particular; I’d go as far as saying it’s on par with Dragon Age‘s voice acting – which is high-praise coming from myself. While most sound assets in the game are rather impressive, the voice of Balfus is simply outstanding. On the subject of sound, the music itself is pleasant to listen to; it’s a familiar fantasy style many gamers would be used to, however there are points at which, instead of smoothly slipping into another loop, the soundtrack will noticeably come to an abrupt halt before fading back in. While this may work for other soundtracks, namely Skyrim‘s, it just doesn’t work and it sounds somewhat messy.

When it comes down to combat, you’ve the choice between speed, range, spread or concentrated damage – there is no in-between. You begin with a weapon’s basic attack and, regardless of your choice, the combat is fairly simple though effective. Each hit has a satisfying impact most of the time, it’s delightfully responsive. Special moves change gameplay just enough to keep things interesting, but the cap to the amount of moves you can use in a single instance retains enough simplicity so all gamers stand a chance. The combat tends to go rather smoothly without too much difficulty to begin with, although as you pass Trials and proceed throughout the game, you get swarmed by significantly more enemies. Considering it only really takes two to overpower and lock you in the corner of the level, it can get really irritating. Either I’m terrible at games or the developers took inspiration from Dark Souls with the overwhelming difficulty; it’s especially strenuous when you’re covered in the base enemy with a couple of significantly tougher enemies heading your way all whilst a deadly mist pushes you into tight corners because you were too distracted to pay attention to the puzzle elements. I can’t say my controller’s in a better shape after playing a good couple of hours. 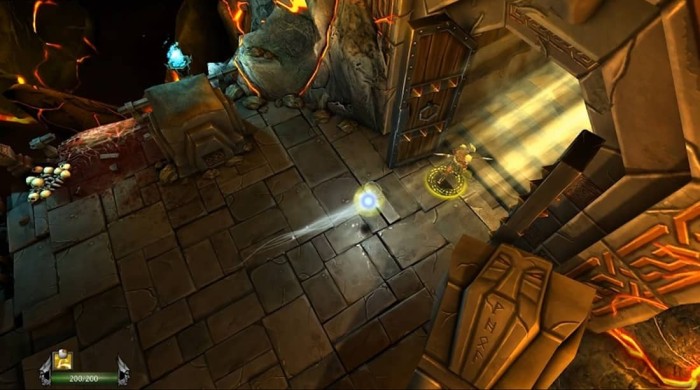 Aesthetically, there isn’t really all that much that sets Forced aside from other games. I’m not saying the art style and graphics aren’t particularly good, they are! It’s only that everything just seems so familiar having played so many games of similar styles; Torchlight for example, as well as pretty much any game set in some sort of fantasy realm (though, at least they’ve not gone down the all-too-common cel-shading route). That said, there’s not much to criticise Forced on; if you enjoy a good challenge, need a decent game to play with friends or you’re looking for a game with an interesting story and set of characters, you can’t go far wrong with Forced. It doesn’t offer anything revolutionary, but what it does offer is solid, engaging gameplay.