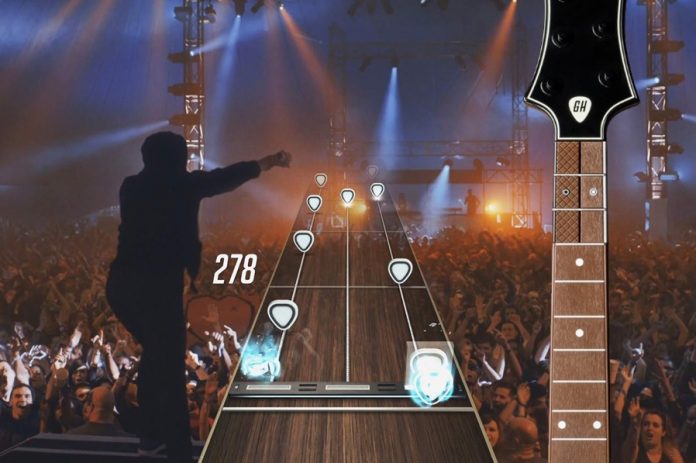 First released on PlayStation 2 some 10 years ago, Guitar Hero quickly established itself as a staple party piece for any video game-loving household.

The simple yet ingenious idea was an astounding success, with Guitar Hero I and II together earning over $250 million in profit. Unfortunately, the success seemingly got to publisher Activision’s head: they flooded the market with 10 titles in less than three years, and as a result, sales soon plummeted.

It’s now been five years since a Guitar Hero title – Warriors of Rock – was last released, and after a long hiatus and a new generation of console owners to appease, Activision have decided it’s time to rock once again. With a new developer, FreeStyleGames, behind the wheel, Guitar Hero is back with a total makeover. And I’ve got to admit, it’s been well worth the wait. Guitar Hero Live is, in no uncertain terms, a well-crafted labour of love; it’s everything that we loved about Guitar Hero back in 2005, but with more finesse and maturity.

The most obvious change that Guitar Hero Live has brought to the table is a brand new control scheme: gone are the familiar five coloured buttons, and in their place a 3×2 monochromatic grid. On launching the game for the first time, even seasoned pros of the old games will feel like newbies; holding the controller for the first time made me nervous, but I needn’t have worried as after a few minutes the new button layout feels intuitive and easy to pick up. One of the main marketed features of Guitar Hero Live over its predecessor is that it’s easier for newcomers to learn, but poses an even greater challenge for experts, and they’d be right. On screen, rather than having five frets, one for each colour, you now have three; one for each column of buttons. Whether you’re playing the top or bottom note is distinguished by the colour of the note onscreen. Only ever needing to use three fingers to press the buttons offers an instant advantage to the uninitiated, but on harder difficulties, the insane switching of black and white notes proves a real challenge. Getting used to the new system is fun and refreshing; although it’s still a far cry from playing a real guitar, the experience feels much more authentic. 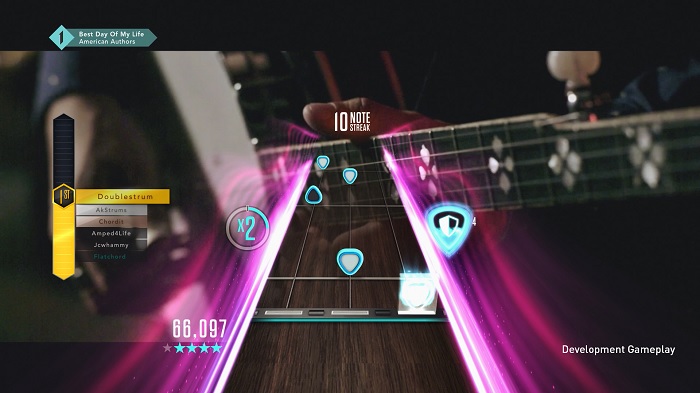 The game itself has had a major face lift too. Menus and displays are streamlined and everything feels much more “grown up” than the abrasive colourfulness of Guitar Hero of old. It’s almost a shame to see the jagged 3D characters of Izzy Sparks, Lars Ulrich, Judy Nails et al gone, but in their place is a gloriously crisp HD video feed that puts you right at the heart of a real rock concert – and it’s a more than fair trade-off. As soon as the game starts, you’re put in a first person perspective of an FMV that sees you travelling from backstage and out in front of a massive crowd, alongside your bandmates. The band play and sing along with you, and so do the crowd; in the campaign mode – now simply known as “Live” – you’ll have to pay close attention to their reactions, because in the absence of any scoring or heads-up display, you’ll only know how well you’re doing by how the crowd and your bandmates are acting. If you keep missing notes, prepare yourself to get booed off stage by the crowd, whilst your fellow bassist and singer scorn you with their looks of despair. Equally, when you’re on a roll, the crowd will go wild, waving their banners of adoration above their heads, whilst your band will spur you on.

The lack of a scoring system is a strange choice and some may miss the chance to chase high scores on a leaderboard with their friends, but it gives way to an extremely sleek and clear looking interface with nothing to distract but your notes on screen and the crowd in front of you. Each gig has a pre-determined setlist, and the choice of songs are varied, so its likely there’ll be at least one or two songs that appeals to most tastes. Unfortunately the variation means that the market that Guitar Hero once appealed to – core rock fans – has been diluted to make way for the likes of Eminem and Skrillex. How on earth you’re meant to play “Bangarang” on a real guitar we’ll never know… 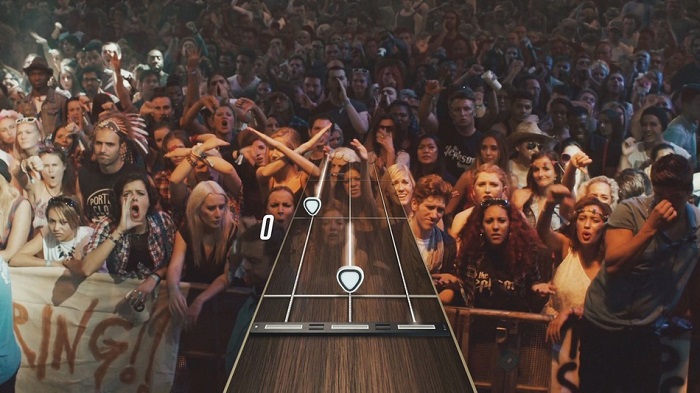 However, I can’t complain too much about the breadth of musical genre available for one simple reason: for the first time in Guitar Hero‘s history, there are literally hundreds of songs playable just from the standard game. Guitar Hero TV is, in my opinion, the focal point of Guitar Hero Live and is an amazing addition to the game which makes it a more instant, more accessible, and a more all-encompassing means of entertainment – especially if you’re hosting a party. Set up like a music channel, Guitar Hero TV plays a constant stream of music videos that you can jump in and play along with at any time. There are currently two channels to choose from – one aimed at being “heavier” rock, and one more mainstream, featuring more pop and indie songs. Each channel has its own schedule, with half-hour or hour-long slots dedicated to a particular theme, i.e. Heavy Metal, or Pop Legends. Each track is accompanied by its official music video, so its the perfect thing to pop on in the background when friends are over, and let them pick up the guitar as and when they please.

Strangely, unlike Live mode, Guitar Hero TV does feature a familiar scoring system, giving you an overall numerical score and a ranking out of five stars. There’s also a dynamic leaderboard for each song where you’re ranked against real players, and as your position changes through the track you know  just how well you’re doing compared to others. As you play, you also earn credits which can be used to buy skins for your fret board (roses and skulls, anyone?), various upgrades, as well as song plays. Guitar Hero TV has a massive library of currently over 200 songs (with more promised to be added regularly), and whilst the mode plays them at random, you can use your credits to play songs of your choosing from the library. You’ll never be inundated with credits, but they’re not too stringent either: thanks to level-up bonuses and the like, within three or four hours of playing, we had around 30 credits, meaning 30 plays of songs of our choice. 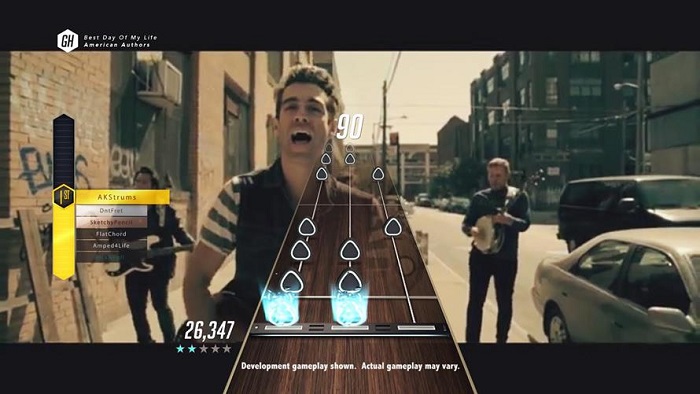 It’s worth mentioning that there are microtransactions in the game, and although these are a massive bugbear for some people, I personally didn’t feel like anything was out of bounds unless I paid more money. You can buy credits – in the form of “Hero Cash” – if you don’t want to wait to earn them, and you can buy a Party Pass which gives you unlimited access to the library for 24 hours. It’s a nice balance; the Party Pass is a reasonable £3.99, and if you’re planning a marathon Guitar Hero Live sesh with your friends, it’s an ideal solution. Considering that £3.99 would have barely bought you two tracks in the old Guitar Hero, and now it gives you access to an ever-growing library of over 200 songs, it’s a steal. And hey, if you do despise the thought of forking out more money, then being able to play all the tracks for free – albeit on “shuffle” – on Guitar Hero TV is more than sufficient. It actually adds a new, exciting element to the game in not knowing what song is going to be up next.

I can’t help but love Guitar Hero Live. The more mature, and frankly flawless, visuals of the game coupled with the new controller works much better than I could have anticipated. The fact that everyone is, once again, a complete newbie is refreshing; we all get to enjoy those small victories of completing a song on 100% for the first time again, and relive the satisfying achievement of moving up to the next difficulty level. With a massive catalogue of songs to choose from, and a lot of scope for updates and DLC, we’re not going to be getting bored of Guitar Hero Live any time soon. Rock on!