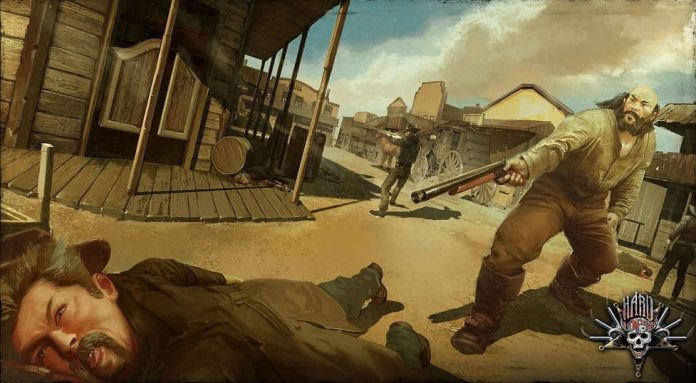 Imitation, as the saying goes, is a form of flattery.

That adage proves to be correct in the case of Hard West, a new turn-based tactical strategy game from the folks over at CreativeForge. Hard West lifts the successful mould left by Firaxis’ XCOM reboot and brings us a brilliantly crafted spin on the rebooted formula – and it works. In Hard West you’ll be battling dark curses and mean, tobacco-chewing stick up men in a weird, weird west. But does a unique setting really carry it that far?

Ever heard of the Weird West? Nope. Me neither. Apparently, “Weird West” is a blend of classic genres melded into one strange, yet intoxicating mix. Weird West stories tend to mix zombies, curses and cthulhu-esque horrors set against spaghetti western motifs and locations. You’ll find reanimated skeletons stirring behind dusty old American homesteads, with dark faces leaning against lonely saloons, or nefarious-looking lone gunmen with gritty smiles, clutching their broken, cursed amulets. It’s almost a steampunk approximation of standard Western stories. Having never even heard of the Weird West before, I have to admit I found it incredibly interesting. Dark, hidden horrors layered behind a gritty exterior? Well, that sounds pretty great.

Knowing nothing about the setting, then, provided bitter and cynical old me with a few delightful surprises. While on the surface it seems as though it treads along the typical western beats, the weird west soon starts to sliver into your room and coil itself around your brain. It really helps, then, that Hard West is wonderfully written and beautifully narrated. A brooding, velvety voice explains the world and the characters of the weird west and you lean right into your new home with ease. It becomes apparent very quickly that this isn’t just a generous XCOM clone, it takes the best bits from XCOM and runs in an altogether different, yet stranger direction. 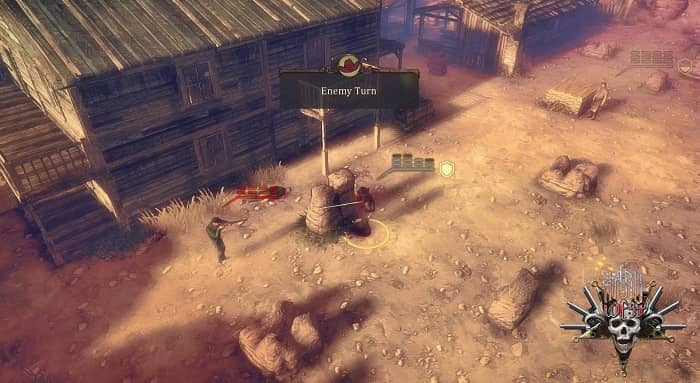 But forget that for now. How similar is it to XCOM? Well, it shares certain obvious traits. The visual feedback seen in the tactical combat elements are almost entirely lifted from XCOM. The amount of cover you receive from objects is shown by shield icons, and a route to your current movement waypoint is displayed as a clear line. Moving a certain number of tiles allows you to pull off an attack, or to instead use a special ability instead. The damage is based on smaller, single digit numbers, where losing one health point isn’t too damaging but losing five is usually fatal. As a result, the combat feels brutal: in XCOM, your units could usually tank a few hits here and there but in Hard West, if you’ve got someone on your flank, you’re dead. The animations and sound design work together fantastically, and loud, punchy gun shots spell certain death, as blood shoots out of your units and they crumple to the floor in a bloody heap. Combat in Hard West is swift and violent and over in seconds. The typical engagement involves a lot of shifting around the map to escape the sightlines of enemies, and manoeuvring your units to get the drop on your enemies, with fights often ending in a daring run along the flank of an enemy and finishing them off from yards away with a loud, visceral shotgun blast, causing your foes to crumble and bleed on the floor. Getting into a fight in Hard West feels more like a subtle, silent standoff, waiting for your enemy to slip up, while making sure you don’t drop your guard too. It might not be your typical Mexican standoff, but it definitely nails a kind of silent, nail biting tension that I think is definitely missing in most games, especially action games where big, schlocky action scenes and extreme violence seem to pass as maturity. In some games, the screen is filled with gunshots, but here they act as exclamation points on the end of a few turns worth of clever manoeuvring and out thinking your enemy.

This is a far cry from XCOM‘s almost clinical deaths. A combination of well-written character stories, permanent death and the brutal, blink-and-you’re-dead gunfights really force you to care for your ragtag group of renegades. A large majority of the game is spent in an overworld map of the area, and once you’ve been introduced to the back story of your group, you’re left to explore the area in a “build your own adventure” style, sort of like FTL, where you hit key locations on the map and are presented with a written scenario and based on what you chose, different outcomes can drastically change your playthrough. For example, one of my characters picked up a necklace from a corpse at one stage, only to be woken in the middle of the night with blindness – he’d been cursed for taking the shiny silver trinket from the dead and I had to then invest myself in a questline to fix his foolhardy luck. Stuff like that is excellent and proof that procedural storytelling can work if written properly, rather than dry and clinical like it usually is. 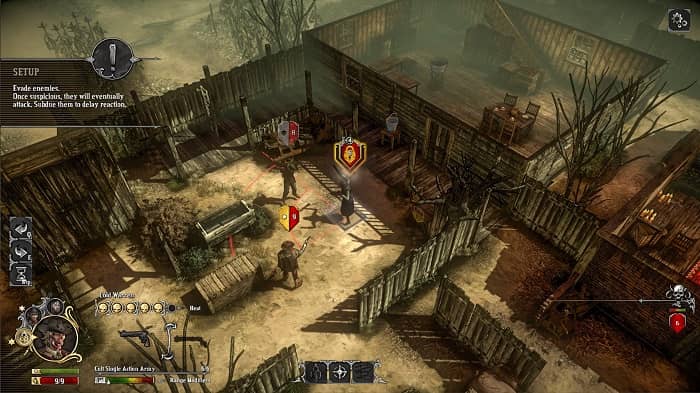 The game is tough. Like… really tough. If like me, you were enamoured by Firaxis’ reboot of XCOM and rediscovered a love of turn-based games, you’ll most likely approach Hard West in the same way, thinking it will play out in the same style. You’ll die a lot if you take this approach, but like many great games, you learn through failure, and soon you adjust to the game’s harsh rules and start finding yourself being immersed in a broken world of curses and skeletons; in a bitter, sand swept lonely world where you can’t trust anyone. Hard West takes the XCOM formula and makes an honest-to-god attempt at expanding on it, and through the death, blood and sand, you’ll discover an indie diamond in the rough.

Hard West is available on PC.