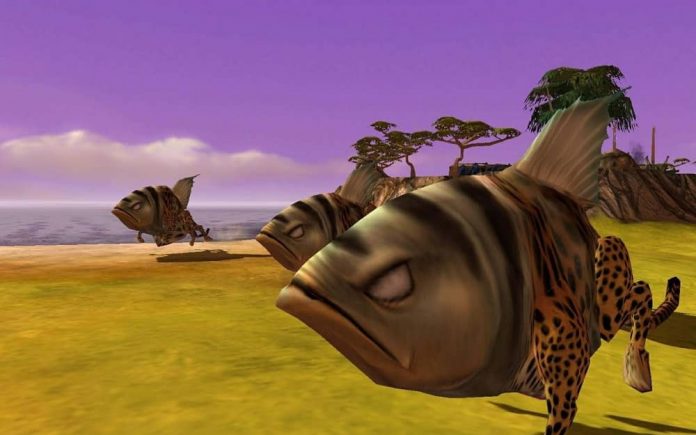 In 2003 Relic Entertainment brought out Impossible Creatures, their follow-up to the critically acclaimed and generally well-loved Homeworld. A strange mixture of RTS and The Island of Doctor Moreau, Impossible Creatures not only put an army at the players’ fingertips, but it let them fiddle, genetically, with the units themselves – and now, with Impossible Creatures: Steam Edition, it’s time to snap on your mad-scientist gloves and get ready to mess about with all the animal DNA you can shake a Cheetorilla at.

Before we get to Impossible Creatures, let me take the opportunity to give a (very) brief history of real-time strategy games. Over the years there have been plenty of games in which you collected and managed resources, constructed buildings, researched technologies and trained armies in order to battle foes and conquer worlds but, until 1992, those games were all turned-based, like playing a board game (possibly the biggest and best known turn-based strategy game, Civilization, was actually based on a board game). In 1992, Westwood brought out Dune II: The Building of a Dynasty, widely regarded as the first proper RTS: that is, it’s the first game that incorporated all of the elements upon which RTS games of the future would be built, and it forced the player to make their decisions and take all of their actions in real time (oh, and it used a mouse and keyboard!). Dune II was a huge influence on the games that followed it, from the original Warcraft and its sequels, to Command & Conquer, Age of Empires, Total War and beyond.

Another game influenced by  Dune II (though, quite probably, indirectly) was Relic’s first game, Homeworld, released in 1999. Homeworld was something of a departure from the standard RTS of the time – it was set in space, missions took place in a fully 3D “bubble” with little or no real terrain in place and it pared down the ever-increasingly intricate and important user interface to something more minimalist. With an epic story about an ancient space-faring race, cruelly grounded on a barren desert world, and their struggles to return to and reclaim their ancient home world, the game set the bar incredibly high for future RTS games in terms of both story and gameplay and is still one of the most highly regarded games in the genre. 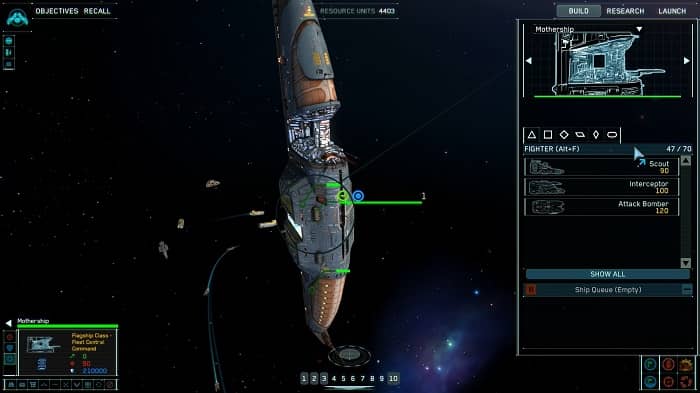 Following their success with Homeworld, Relic spent the next four years working on a new IP. In it they wanted players to be able to do something they hadn’t, thus far, been able to do in an RTS – create the actual units that you’d send in to battle. By “create” I don’t mean “build”; I mean actually, physically choose which characteristics those units would have from a pool of possible starting values. The way they did it was to make a slightly tongue-in-cheek game, set in the 1930s, where players can fuse two animals into one, bizarre beast – they created Impossible Creatures.

Rex Chance, ex-war correspondent, has gone on a mission to find his long-lost father, Dr. Eric Chanikov – who, we’re told, has developed this amazing technology known as “Sigma”, which allows him to splice together two animals to create one super-animal with characteristics from both of its genetic donors. Unfortunately, Dr. Chanikov’s benefactor, Upton Julius, kills Chanikov before Rex has a chance to meet his father and steals the Sigma technology. With the help of Dr. Lucy Willing – Dr. Chanikov’s assistant – Rex goes on the hunt, gathering animal DNA to build an army of creatures and, ultimately, stop Julius from trying to use Sigma to take over the world.

In terms of the basic gameplay Impossible Creatures isn’t really anything special – it’s an RTS in which you build up a base, gather resources, research technologies, build an army and alternately defend your base from attacks and take the fight to the enemy. While Impossible Creatures does try to include some extra mission objectives (collecting DNA, stealing enemy tech and moving the main characters around the map a bit), it still sticks to attrition as its main tactic: build a bigger army to win. But building the army is where this game really shines.

As you progress, you’ll use Rex’s tranquiliser gun to (humanely) shoot and sample the DNA of various animals. Once you’ve got that DNA, you can use it in your genetic experiments to create ever more bizarre and (as you get used to how the stats balance out) useful creatures to take into battle. With over 50 creatures, each with up to six attributes to combine, you’ve got hundreds of thousands of possible permutations (I’m terrible at maths so it’s probably higher than that!) to play with. However, you’ve only got nine slots in your Army Builder so you’ll need to choose your creatures wisely. 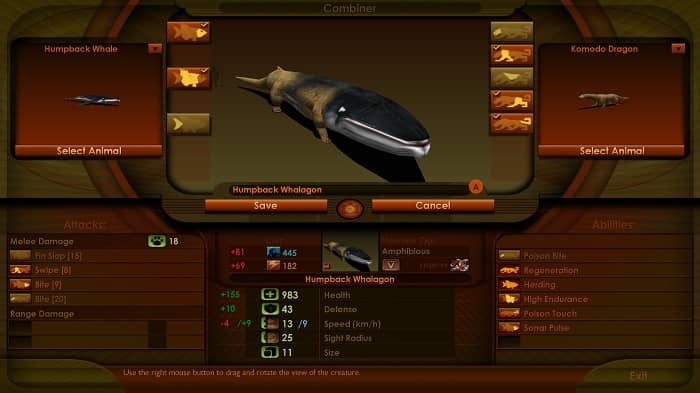 Each animal has different attributes (obviously), so a giraffe has a really good sight radius – useful for spotting enemy creatures – but poor defence, whereas a snapping turtle has great defence but is slow. When you combine them, you can choose which parts of each animals’ body to include: some of these parts have special abilities – an electric eel tail will give your creature the ability to shock its prey, a gorilla can smash things with its forearms, a cheetah’s back legs can be used for great speed – so you’ll want to try to include them in your creature. Fortunately, the UI helps you out there, listing all of the attributes for each animal as well as giving you the option to activate a particular ability. You can also see what greater effect one part of the animal has over the other – base stats like speed, melee or ranged damage, defence, health and sight radius all go up or down depending on which parts you use. The animals you choose will also affect their cost – both in terms of resources and the research level you’ll have to reach before you can actually make any of them.

However, when you get right down to it, you’ll never actually use all of the different animal combinations to create your Impossible Creatures (see what I did there?). When you first encounter the lobster you’ll start using its regenerative capabilities for just about every creature. Things like the wolf and coyote are reasonably powerful and relatively cheap to produce so why would you want to use any of the more expensive animals when they do the job just as well? As for airborne creatures, you’re as well steering clear of them wherever possible as you never really have need to pit airborne against airborne, there being so many great ranged options available in your ground forces.

Saying that, Impossible Creatures still manages to be incredibly good fun. You can spend hours goofing around in the Army Builder, just coming up with endless varieties of strange and bizarre creature combinations (it’s worth it just to watch the composite display change into something increasingly wacky as you continue to change the makeup of limbs, torso, head and tail). There’s a multiplayer, too, in which all creatures are unlocked from the start and you can duke it out with your friends over which combination is the best (though, as I said above, this conversation will be short, especially if one person decides to have a glance at the internet for the best combos to start with – something I did before playing). Not only that, but Impossible Creatures really feels like it’s got something that other RTS games don’t: it wears its innovation on its sleeve (literally – the box art has a lobster with a tiger’s head) and Relic weren’t – and aren’t – afraid of doing something different to try to push the genre. 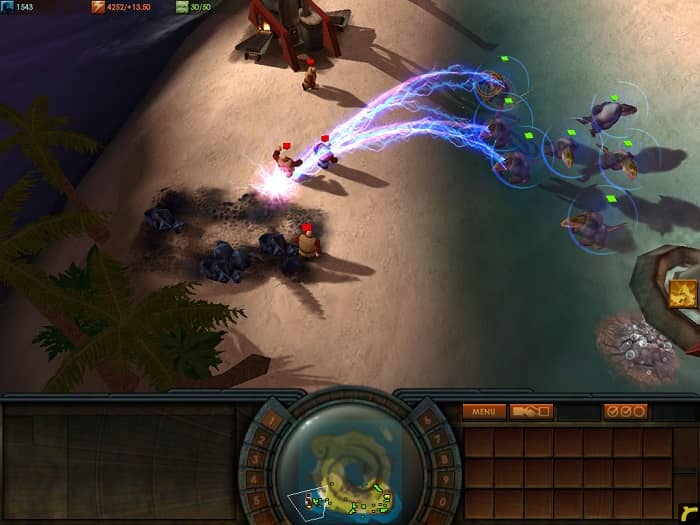 THQ acquired Relic in 2004 but they continued to try new things with real-time strategy games. Later that year, they released Warhammer 40,000: Dawn of War –  the first time that Games Workshop’s iconic tabletop game setting had been used in an RTS, despite its incredibly good fit for the genre – another game that changed what the RTS could be. Instead of farming or mining, resources came from control points scattered throughout the map – making advancement across the map and the defence of strategic locations key to the player’s success – and, instead of controlling groups of single units, squad-based tactics could be employed with the ability to bolster each squad with reinforcements and heavy weapons or the addition of an officer or medic.

Relic weren’t the only innovators of the RTS, though. Creative Assembly had been making waves with their Total War series and had incorporated more real-life situations and behaviours than other games of the time and fused turn-based and real-time strategy elements – the former being used for the main campaign where players moved armies across the map, fortified positions and gathered resources and the latter used in battle.

Blizzard made a huge leap forward with the seminal StarCraft and Warcraft III: Reign of Chaos – mainly in terms of integrating excellent and rather epic story-telling into the framework of an RTS but also in terms of gameplay. StarCraft was instrumental in leading the way with game balancing and helped drive early eSports developments (particularly in Korea) when its expansion, Brood War, featured an incredibly well-implemented and eminently watchable competitive multiplayer. Warcraft III was another stand-out title and introduced hero characters with the ability to carry loot, optional objectives presented as quests and given throughout each mission (previously you’d know all of the main and side objectives at the start of a mission), a levelling system and an RPG feel that would pave the way for World of Warcraft. Perhaps most importantly, though, Warcraft III would go on to spawn some of today’s most important esports titles due to its World Editor – Defence of the Ancients (better known as DOTA) was born in Battle.net and that, in turn, inspired current eSports darling: League of Legends.

Other games have tried to help the RTS evolve: Sins of a Solar Empire incorporated turn-based and real-time strategy to build a new galactic empire across space; Natural Selection fuses FPS and RTS together, with one player taking the role of commander in charge of the overall mission; Dawn of War II got rid of base building altogether in favour of more focused squad play; Achron attempted to include time-travel mechanics (it’s weird but it works!) and Halo Wars was the first RTS that really felt at home on a console.

But, despite all of the innovations made in RTS games over the years, the majority are really just variations on or advancement of earlier mechanics and no other RTS gives you the chance to do what Impossible Creatures does. None of the others really came close to the kind of evolution Relic were attempting when they decided to put the power of creation into the players’ hands – not in an RTS game, anyway. With the Steam Edition out now, there’s no better time to delve back into the early 2000s and get caught up on the RTS evolution that you might have missed the first time around.