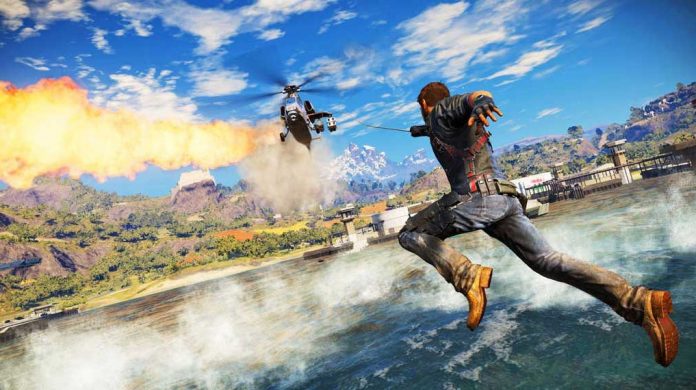 So, we’ve spent a few hours with a retail copy of Just Cause 3 for PlayStation 4 now, and we have to say what we’ve seen is pretty impressive.

First things first, at this point in time we are unable to proceed past the second story mission due to the game crashing, which we presume will be fixed by the day 1 patch that has seemingly not yet been released (at least in the UK).  It’s come to our attention however, that some users are encountering no such issues, which means our case may be isolated. Whatever the case may be, hopefully the patch will be available shortly so that we can experience what we expect to be a silly but action-packed campaign if the first two missions are anything to go by.

UPDATE: Patch 1.01 has now been released, which has indeed rectified our issue. So what did we do instead of the story missions for the three hours we played? Well, we parachuted around with ease, took our wingsuit for a spin which resulted in us face-planting the floor upon landing numerous times, and drove around in some pretty snazzy sports cars. The most impressive and important thing we did though, was blow stuff up.

From the short time we’ve spent with Just Cause 3, we’ve already fallen in love with its destructibility. The amount of objects in the environment that are susceptible to your arsenal is commendable, and destroying or utilising them to your advantage really gives the game a true next-gen feel. When you’re not shooting out a car’s tires or starting an explosive chain reaction by igniting a gas station, you can have great fun with Rico’s upgraded grappling hook by tethering two objects together. It’s a great game mechanic that enables you to partake in some creative killing and wanton destruction, with our personal favourite being attaching our enemies to explosive barrels before violently hoisting them together with explosive results. Oh, and did I mention that the explosions are the most beautifully eye-popping explosions we’ve ever seen? Objects burst in a ball of scorching flame, with debris and smoke filling the air. It’s an astoundingly realistic sight that quickly becomes addictive, especially when many explosive sources have their own unique method of providing you with eye-candy. Our faces were filled with delight as we ignited some rather large gas canisters with a single bullet, before watching them fly off like giant rockets on bonfire night. When we could drag ourselves away from blowing things up, we found a few settlements to liberate that required us to complete numerous objectives such as freeing prisoners, pulling down statues of Medici’s oppressive dictator, and of course generally just destroying anything purveying propaganda. Left to our own devices to complete these tasks in any order and any way we saw fit, they presented us with a great slice of sandbox gameplay that we can’t see ourselves getting tired of anytime soon. Liberating the settlements also allowed us to take part in some challenges, such as racing a vehicle to a target before bailing on it to use it like a high speed bomb. Completing the challenges awards you with gears, which are collected in order to unlock boosts for your abilities and arsenal. Very handy!

Graphically Just Cause 3 is very nice looking for an open world game and has a great draw distance, although there seems to be a lack of anti-aliasing which is a small let-down. The framerate has a few issues, particularly notable when you’re driving a fast car, but it’s not bad enough to ruin your enjoyment of the game in any way. It could even be fixed when the day 1 patch lands so I don’t think its anything to worry about in particular. Overall, Just Cause 3 seems like it’s certainly going to live up to expectations of being a high octane open world game full of destruction, stunts and hilarity. We can’t wait to spend more time with it, especially when we’re able to proceed with the story campaign which appears to be highly entertaining. As soon as we’ve spent considerable time with the title we’ll be back with a full review, so keep your eyes peeled!

Just Cause 3 is available on Xbox One, PS4 and PC. Order your copy now from Amazon