Armed with nothing but his trusted longsword, the White Knight is no match for the valiant Smokey, who cuts him down with a single laser blast to secure the holy grail for himself… hang on.

Knight Squad, from developers Chainsawesome Games, is not going to win awards for being historically accurate, but that’s okay! Eight knights will enter the arena armed only with their trusty swords, but when the time runs out, I guarantee that only a few will end up carrying steel. From bows and arrows to wizard staffs, horses to undead minions, there is an impressive amount of ways to gain the upper hand when it comes to ensuring your foes stay dead. There’s also a variety of power-ups to accompany them, from an increase in speed to freezing all your opponents in place. Don’t bank on having an impressive arsenal all match though, you could run through at any time. Best be quick on your feet and keep your back to the wall!

Unless a Knight comes through said wall with a drill and runs you down, that is. Happily, that will only occur in certain game modes. Speaking of which, the amount of game modes is staggering. You can play the typical Capture the Flag, Last Man Standing, Team Deathmatch, but also Football (soccer), Gladiator, Jailbreak and Juggernaut. There are 13 game modes to chose from, each having between three and nine maps, so you’re never short of levels. Once in the game, there’s a selection of medieval weapons you’d expect knights to be familiar with, plus some not so historically accurate weapons such as Miniguns, lasers and a saw-blade firing gun. Your Knight will never run out of ammunition so you don’t need to worry about being frugal, but remember that if you die, your weapons get reset to the humble sword. That isn’t necessarily a bad thing, as it can give you an advantage over people with weapons that need to be reloaded. 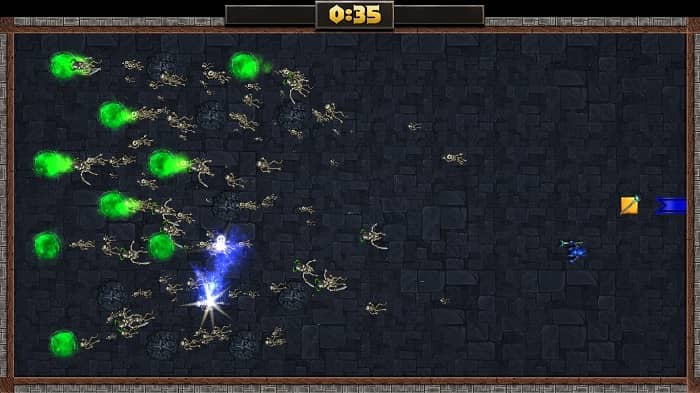 That said, playing Knight Squad isn’t just a case of just running around mashing the space-bar to become a human blender. There is a slight delay from when you press to when your knight swings their sword. Naturally, swinging several feet of steel would not be something you’d be able to do instantly, so you have to think slightly ahead. As mentioned earlier, all ranged weapons take time to reload, so you’re never able to just fill the screen with projectiles and cover the floor with bodies either. It’s a simple way to balance out matches, but it works. Should your Knight get slain, then fear not as respawning takes a matter of seconds, with your resting place being marked by a skeleton that shrinks over time and eventually disappears, stopping the levels from becoming littered with the fallen. Weapons will spawn in relatively quickly and all types populate every game mode and level – aside from the minigun which only exists in Juggernaut.

Collect two of the same power-up, and you get a significantly upgraded version. For example, your Knight’s humble starting sword can be upgraded to a longsword, which is quicker to swing and noticeably longer in terms of its damage arc. Pick up the bow and arrow, and the arrows will explode with the next upgrade. The animation for all these weapons is spot on, and very smooth. The visual effects from the weapons really pop out from the level backgrounds, with crisp sound effects to compliment them. With that in mind, it never becomes overly busy on screen that you lose track of where you are. If you get a selection of kills in quick succession, you’re awarded to the classic “Double Kill/Triple Kill/Quad Kill” announcement and a bonus score to go with it. The majority of the level layout can be destroyed too, so you’re not always limited to the predetermined paths if you fancy making a shortcut. There’s enough variety in the main levels to ensure that you never repeatedly play the same level – unless it’s Football, as there’s only three pitches, but that’s understandable. 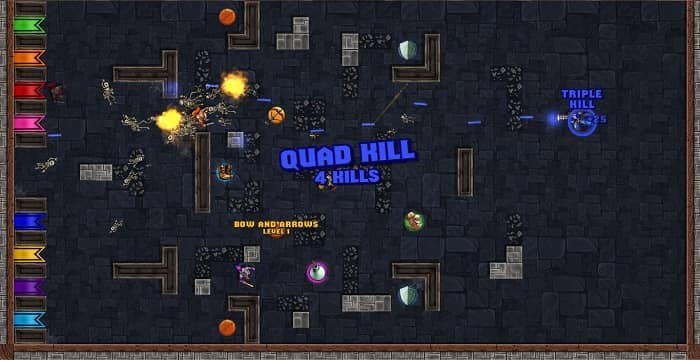 If you want to take a break from the main levels, then you can indulge yourself in a series of challenges, ranging from defeating swarms of the undead to slaying the dragon. The replayability here is huge (as it is with all of the game in fairness) as once you’ve completed a level, you’re shown the online leaderboards so you can compare times and aspire to do better. Each new level is unlocked by completing the previous, which can prove to be a bit of a pain if you’re keen to unlock a particular challenge. There’s also no way to save your progress during a challenge, so if you snuff it, then you’ll have to start over. That said, the challenges in Knight Squad are not impossibly hard but do increase with difficulty, so completing won’t require exceptional gaming skills but make sure your reflexes are sharp! If you get completely tired of playing, there’s even a “Bots Showdown” option, where you set the level and game mode, and sit back and watch the action as eight Knights tear each other to pieces.

Clearly, Knight Squad is designed to be played with friends, so imagine my surprise to find a complete lack of players online. Now, this could be that I was playing the game in the UK, so America hadn’t woken up yet, but I never saw more than three games online, and even then, they were sparsely populated. In some instances, there weren’t any online games at all. This is a shame, because the game appears to very popular on Steam, and it’d be ideal for online matches due to its short, sharp rounds and frantic gameplay. It may cause some friction between friends if you play certain game modes, though. I lost count the amount of times I had almost taken the grail/flag back to the scoring zone, only to be cut down at the last second and watch as all my hard work came undone. It can become nail-bitingly tense at times, but it doesn’t dampen the fun.

Overall, Knight Squad is a fantastic game to sink your teeth into, either by yourself or with a group of friends, as it’s quick to pick up and learn, but will take a while to master. It may cause some friction between friends though, as it gets seriously competitive very quickly!

Knight Squad is available on PC and Xbox One. We reviewed the PC version.