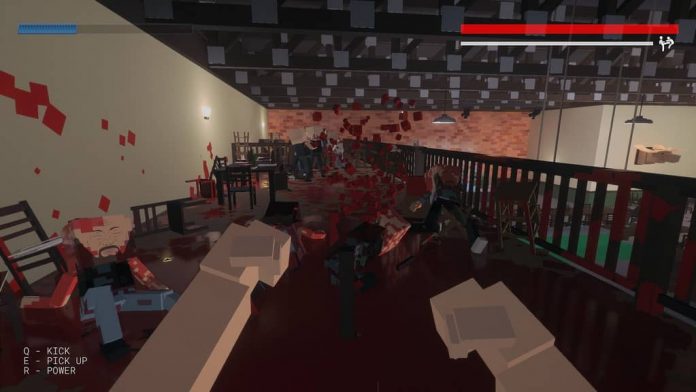 Going into this review I had no idea what kind of game Paint the Town Red was. But now, after stabbing a guy to death with an afro comb, I think I know: this could be the kind of game Jack Thompson has been starting lawsuits over for 13 years.

The idea behind the game is simple: start a fight and be the last one standing when you’ve punched, kicked, knifed, glassed, batted, chaired, cued or afro-combed everyone else into a bloody mess on the floor, walls and ceiling. You, a lone… man… I guess… with nothing better to do (let’s just say that story and motive are not big selling points of this game), walk into a room. People are talking, drinking, laughing, dancing and generally being alive. You sidle over to the pool table and pick up a cue that’s just lying there. You look across at the bikers playing on the next table. You decide to take a swing at the nearest one and watch as the cue takes half his jaw off. Cuboid spurts of voxely blood spray across the table, and the whole bar – enraged at the clash of claret on their nice, green baize – decide that it’s brawlin’ time.

To aid in your quest to, er, paint the town red (see what I did there?) you’ve got several options: punch, kick, jump or pick up whatever you find lying around and either throw it or smack people with it. Just about anything can be turned into a weapon (as I said, afro comb) and that simple mechanic really makes the game stand out as one of the most fun time wasters I’ve played in a long while. 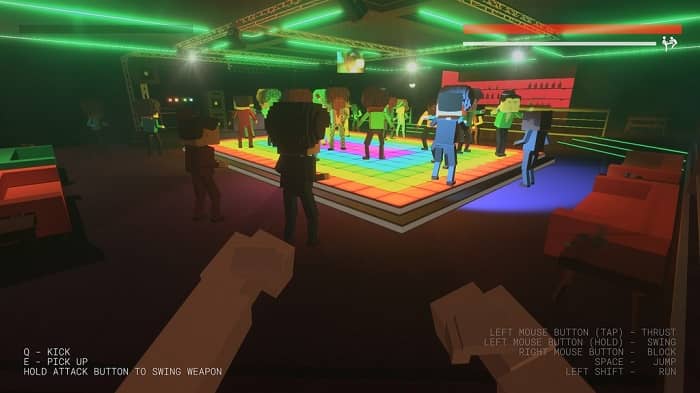 At the time of writing, only two levels are available to play in this Early Access build: a biker bar (a multitude of rooms and a secret basement housing the level’s boss) and a discotheque (lots of open space, dimly lit with only a few additional rooms and a katana-wielding maniac boss). South East Games have promised that, in the release version, Paint the Town Red will have numerous levels throughout history, meaning that weapons from the relevant time period will show up for you to use – but, to be honest, even with just two levels the game never really gets boring.

It’s tough enough that you probably won’t get all the way through both levels – at least, not on your first go – and it’s fun enough that you’ll be more than happy to go back into those levels and see if you can beat them again. Maybe you’ll hunt down the boss and take them out first, or start in a different area, or try to do the whole thing without using any weapons other than the meat-hammers you’ve got attached at wrist and ankle. 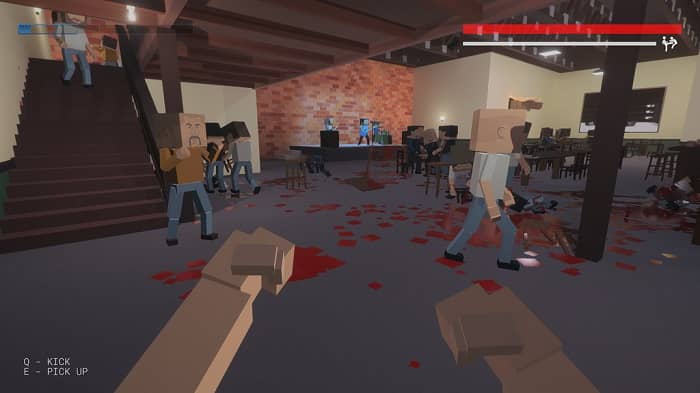 Paint the Town Red does some things exceptionally well: the voxel-based graphics are very nice to look at, the models break apart with great satisfaction, and blood spurts beautifully. The UI is very clear; it’s not cluttered, it provides all of the information that you need and makes it really easy to see what you can pick up without being intrusive. More importantly, the basic gameplay is practically flawless (although some weapons could do with being a bit more durable – I refuse to believe that there are chefs out there chopping food with knives made of glass), and it’s laugh out loud funny – in the right circumstances. The downside is, it’s pretty shallow: if you’re looking for a story or any sort of narrative, you need to look somewhere else.

In their dev diary for the game (available on their website) South East Games’ Matt Carr has, in no uncertain terms, stated that they’ve “removed all concept of an explicit story from the design in favour of just doing what would best serve the gameplay”. While I certainly didn’t feel the need for any story in the two levels I played, going into level three or four when I’ve got no reason to fight (certainly no reason to have to strike first – the brawl can’t start until you swing that punch/kick/bar stool) and nothing to show for having bested the other levels, may prove to be a lot more difficult to stay engaged with the game. 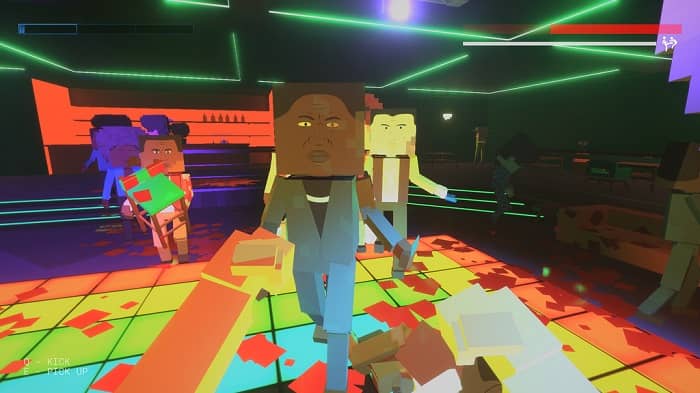 The main engagement with Paint the Town Red mainly comes from the fact that it is so cathartic. I’d never, ever get myself into a fight on purpose so having something like this to jump into and work some aggression out on is brilliant, if a little disturbingly so. There are some issues other than lack of story: the audio gets repetitive quickly, there are some balance problems with weapons (some degrade too fast, others are incredibly overpowered), and some might feel that the game is a bit gimmicky. It’s got a little while left in Early Access to work out all of those little kinks and minor problems before it moves into being ready for release so we’ll see many upgrades and improvements to Paint the Town Red as the months progress.

For now, though, Paint the Town Red is an incredibly polished Early Access game for those of us with a less mature (or, rather, less civilised) sense of just what “fun” means to us. Now, where did I leave my afro comb…?

Paint the Town Red is available on PC.