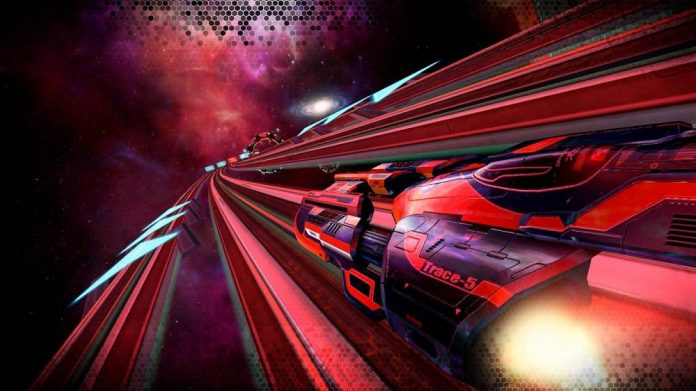 I tend to avoid anything with the suffix “Ultra”, on the grounds that it probably won’t be. It probably won’t even be “Mega”, or “Uber”, or even “Ace”. Normally it’s “Crap”. Thankfully this time around Atomicom’s Switch Galaxy Ultra lives up to the name. This is a fast-paced, space-surfing, sci-fi time trial racer that will give even the most caffeinated of gamers a run for their money.

On the surface Switch Galaxy Ultra looks like a Wipeout game, and you wouldn’t be far off for thinking that. Many members of Atomicom’s team worked on the old Wipeout series, and as a result the art direction and feel of the game is very reminiscent of those titles. However, this is not a standard sci-fi racer; this is a time-trial based lane switcher. As Vince Vance, employee of Dakur Technology, your job is to speed along the spaceways (which quite frankly look very inefficient to travel on for your everyday commute), collecting the rare element “Tantalum”. Despite what most fictional spaceships would have you believe, your controls are very simple: arrow keys to speed up, slow down, go left and go right. It’s this left and right that you really need to pay attention to. This game boils down to dodging left and right by switching lanes along the spaceways as you are faced with ever more inconvenient obstacles. Sounds simple, but you really wouldn’t want it to be any more difficult.

As you speed along in one of five ships that unlock as you progress, you’ll be met by four different colours of barriers, drones, asteroids, pirates, and radical jumps. Sometimes you won’t be able to dodge the barriers, and your only option will be to pick up the right colour pass on the way to get through safely, although at breakneck speeds this isn’t as easy as it sounds. To help you on your runs you can purchase extra passes to nullify the effects of some barriers, and also upgrade aspects of your ship, such as dexterity and acceleration. Upgrades are purchased with credits that you pick up along your run, and you will find that it’s essential to keep upgrading your ship later in the game to achieve a respectable time. 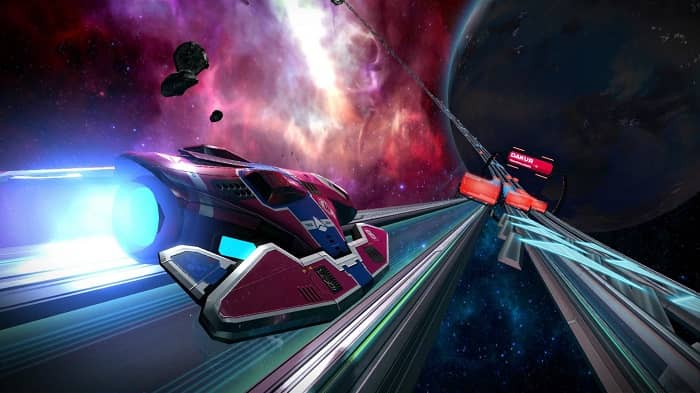 Time. The enemy of us all, and it’s no more formidable than in this game. Switch Galaxy Ultra is all about getting the best times. The faster the time, the more Tantalum you’ll pick up on a level, with a maximum of 10 Tantalum gained if you can beat that special Gold time. To progress to each new planet you’ll have to be carrying the requisite amount of Tantalum, so later in the game you may find that you won’t have enough to progress if you’ve been limping across the finish line, and you’ll have to pop back to previous runs to get a better time. Although at first this seems like a slightly annoying system, it actually encourages revisiting previous levels, taking new approaches, and trying to beat your own personal best. A Gold time on every run isn’t required to beat the game, but you will almost certainly find that if you miss it by a couple of seconds you will keep coming back until you tear that level a new wormhole. To this end, despite the game taking around four to five hours to complete, the gameplay is solid enough to keep players coming back to levels again and again to beat their own time, and there’s even an endless survival mode when you’ve finished with that. If that isn’t enough of an incentive though, the fact that my Steam name sits smugly at the top of most of the 55 levels’ leaderboards might be.

Aesthetically Switch Galaxy Ultra is quite pretty for a 3D game on this sort of budget. The ships are sleek and well designed, each coming with a set of skins to purchase with your credits, and the skyboxes and tracks often give a massive sense of scale. It’s a fairly trippy sight when you see the track before you curving away into space and up to a orbital dockyard miles and miles away. On the other hand, if you’re any good at the game you should really be concentrating on what’s in front of you; sometimes you’ll zone out so much the graphics may as well be Ascii art. The overworld map is simple but fairly easy to navigate, and the little fact files attached to each planet are an unnecessary but neat touch. 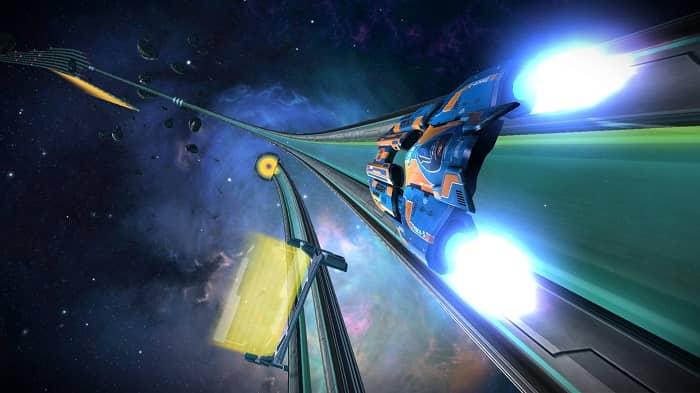 However, the art that impresses the most in Switch Galaxy Ultra is found in the comic episodes that serve as a rudimentary story to the game. Illustrated by Wipeout concept artist Darren Douglas, there are seven comics to unlock in the game. Although not plot heavy, each episode is an endearing tale in itself, with the standard of the artwork being better than most popular publications today. During early stages of the game you will also hear some voice acting from Mike Clark and Anna Leszczynska, the latter of whom has the most peculiar cadence and accent I have ever found in a video game, but pleasant nonetheless. Mike Clark also provides an arcade-y techno soundtrack to accompany you as you blast through space.

Switch Galaxy Ultra is an addictive game with a simple but well executed concept. Although players who aren’t used to “twitch-like” games might have trouble in the later levels, the game is cheap enough and slick enough to warrant a purchase; those with cat-like reflexes and a need for speed certainly don’t want to miss out. If you do enjoy the game be sure to pick up the very cheap DLC pack supporting the charity Caudwell Children in the UK.

Switch Galaxy Ultra is available on PC and coming soon to PlayStation 4 and PS Vita. We reviewed the PC version.