For me, Beyond: Two Souls was one of the best games of the last generation.

Sure, the “interactive story” medium may come under heavy fire for its generally restrictive gameplay, but Beyond had an incredibly gripping storyline, some of the best graphics we’d ever seen on PlayStation 3 and an incredibly impressive cast of characters, led by a remarkable performance from Ellen Page and an unforgettably eerie Willem Dafoe.

Its port to PlayStation 4 was first rumoured over a year ago, and Quantic Dream have dithered in announcing a release date, but finally it was released – without much fanfare – onto the PSN store last week. It’s safe to say that this next-gen version of the game delivers everything that the game first did back in 2013 – and more.

For the uninitiated, Beyond: Two Souls tells the story of Jodie Holmes (Page), a young woman born with a gift: she’s tied to a supernatural entity called Aiden. She can’t see him, nor does she know who – or what – he is, but he’s always with her and she can use him to manipulate objects (and people) in the environment. Quite a handy skill to have, as it turns out. Unfortunately, it means Jodie has led far from a normal life: since being a young child, she’s been brought up in a government facility run by the DPA (Department of Paranormal Activity) under constant surveillance, and eventually used as a tool by the CIA. The game follows Jodie’s – and Aiden’s – story, told in a series of flashbacks from key points in her life, all the way from young childhood to present day as a 20-something. 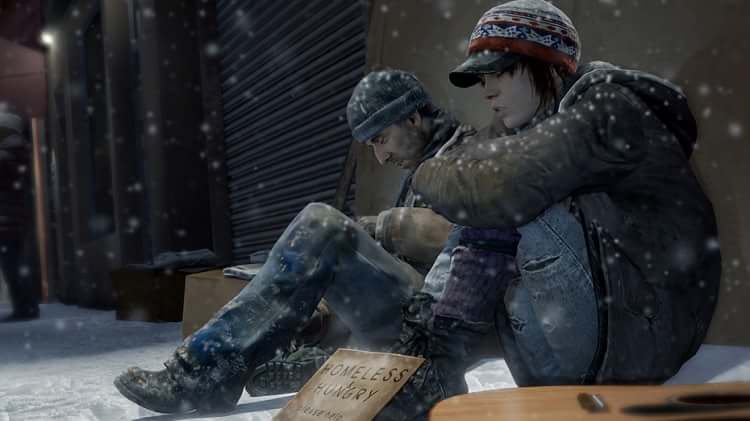 As the player, you can control both Jodie and Aiden, having to switch between the two to complete certain objectives. It’s worth noting you can also play the game in local co-op, with one player taking control of Jodie and another controlling Aiden. Aiden, being a spirit, can travel through walls and to areas that Jodie is unable to access. Whilst he can never wander too far on his tether to Jodie, it offers a great opportunity to explore the environment, and often gives you the choice to spy on situations that you would not otherwise be privy to. The only trouble with this is it doesn’t always feel consistent: depending on what the game wants you to see or hear, Aiden’s reign varies from situation to situation. Some walls he cannot pass through. Sometimes he can wander far from Jodie with no problems, and other times he’s limited to a radius of a few metres. Obviously this is a design choice – Beyond: Two Souls isn’t an open world game, but giving you some elements of exploration and restricting it in certain situations takes something away from the realism of the game.

Graphically, the work done on the PS4 remaster of Beyond: Two Souls is subtle, but effective. For me, the game showcased some of the best graphics ever seen on PlayStation 3 back in 2013 so not much of an overhaul has been needed. Textures have been brought up to date, character models have been tweaked and the game runs smooth from start to finish. The wealth of locations on offer have all been well-designed and well-realised: from the snowy streets and cold mid-city underpass, to a Middle Eastern warzone and a barren desert ranch, the breadth of variation is commendable and a lot of work has clearly gone into bringing each location to life. 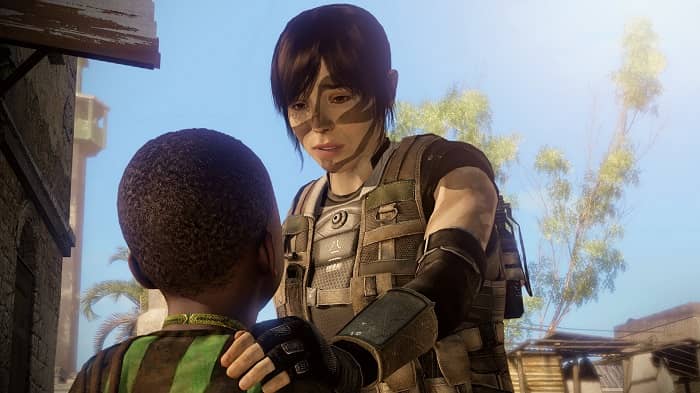 As we expect from any Quantic Dream game, the story is key, and in that regard, Beyond: Two Souls certainly doesn’t disappoint. Jodie is a believable and likeable protagonist, brilliantly acted by Ellen Page. The supporting cast are all equally believable, with memorable characterisation and stellar voice acting. A complaint with the original release of Beyond: Two Souls was the design choice to jumble up the timeline: playing the game, you jumped from being Jodie as a young girl, to adult Jodie in a warzone, and back again. It made it difficult to piece together her story and work out where each event slotted in. This PS4 release now gives you the option to play in the original remixed order, or to play chronologically. It’s a very simple but effective addition, changing the overall feel of the game to give a different experience – especially for those that are already familiar with the game; it gives a much more grounded approach to the narrative and helps build a better understanding of Jodie’s story. Nevertheless, I’d argue that if you haven’t yet played Beyond, you should still choose the original mix to experience the original vision of the developers, but being given the option to play either right from the start is a welcome addition.

As good as Beyond: Two Souls is, it isn’t without flaws. The game is very dependent on quick time events and these can often be difficult to interpret. Where many games will give you the exact directional prompt on screen, Beyond expects you to move the analogue stick in the direction that Jodie is about to move, slowing down time during an action scene to allow you to do so. It sounds great in principle, but unfortunately it’s not always clear as to what direction Jodie is moving in. She often makes illogical movements too: for instance, in a fight sequence where we know we have to dodge an incoming attack, we’re prompted to move towards the attacker instead of away. It’s not a deal breaker as you can’t “lose” the game per se, but missing prompts can have an impact on the outcome of the story, so it can be frustrating. 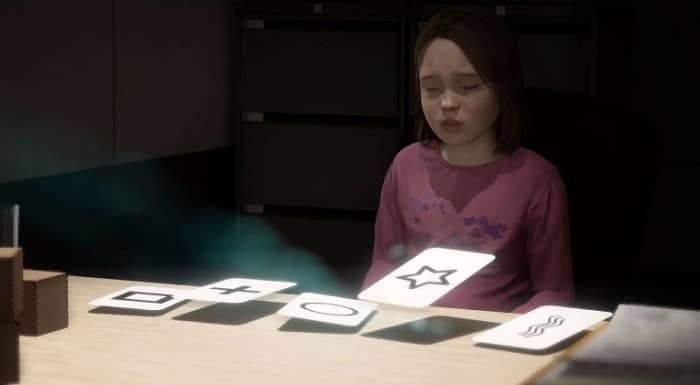 I’m so glad for the opportunity to revisit Beyond: Two Souls. It was a fantastic game back in 2013, and it’s still a fantastic game in 2015. If you never played Beyond on PlayStation 3, now is your chance. The unforgettable story, incredible acting and variety of detailed locations all help make this a timeless game that, despite its minor niggles, deserves recognition as a stellar example of story-driven gaming done right.

Beyond: Two Souls is now available digitally on PlayStation 4.