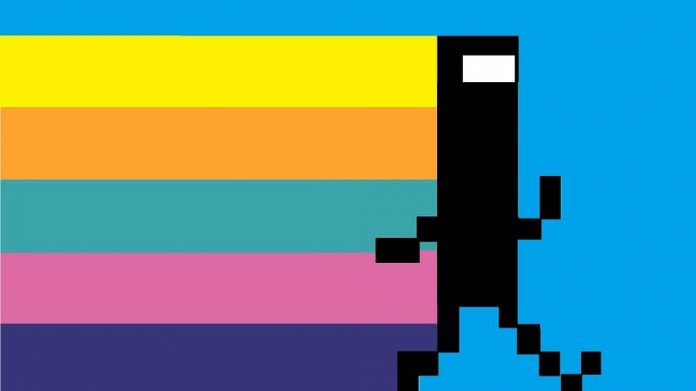 By now, I’m sure most of you have heard of the BIT.TRIP series of games. Developed by Choice Provisions, formerly known as Gaijin Games, the BIT.TRIP series consists of several pixelated 80’s style rhythm based games, each with a delightful chip-tune soundtrack.

Originally released on the Wii and 3DS via WiiWare, THE BIT.TRIP comprises of six of the seven existing BIT.TRIP games all neatly wrapped into a single bundle, released for the first time on PlayStation consoles. Offering a hearty piece of pixelated fun that is as addictive as it is difficult, the best way to tell you what THE BEAT.TRIP is all about is to look at each game in turn, so let’s get started, shall we?

To begin with, we’ve got BIT.TRIP BEAT. If someone were to take Pong, mix in some Guitar Hero with a sprinkle of Space Invaders, they wouldn’t end up far from BIT.TRIP BEAT. In this game you simply take control of a paddle and bat away the incoming onslaught of pixels. The game starts off deceptively easy, blocking little blocks, one by one, to a steady beat – then begins the next part. It’s when pixels begin to fly at you in swarms when you realise that the first section was just a malicious ploy to get you all comfortable and in the groove to then bombard you with all of these wavy lines of pixels! Though, I can’t help but think that what really makes BIT.TRIP BEAT difficult to play is the amount of explosion effects and background imagery along with the control scheme.

Normally, I could play a game like BIT.TRIP BEAT for three hours straight until I’d completed it, but that’s not the case this time. The overuse of particles besides the paddle and the oncoming pixels ended up screwing with my eyes and it wasn’t long until I needed to take a break and two paracetamol. It’s not often games cause me headaches; perhaps a way to minimise the amount of screen activity would be appropriate. Now, the controls: I played BIT.TRIP BEAT on PS4 on which the developers have, for some bizarre reason, opted for the paddle to be controlled through the controller’s motion sensor rather than the analog stick or even the directional pad! While that may be okay for some, the sensitivity of the sensor makes the game almost impossible to play if, like me, players have unsteady hands.

I’m all for rhythm based games, especially ones with a unique twist like BIT.TRIP BEAT with its funky soundtrack. At its core, it’s an interesting and fun game, especially to play at parties, though for some it’ll be difficult to play for significant periods of time (which may not be too great because, as far as I can tell, your progress mid-level isn’t saved). 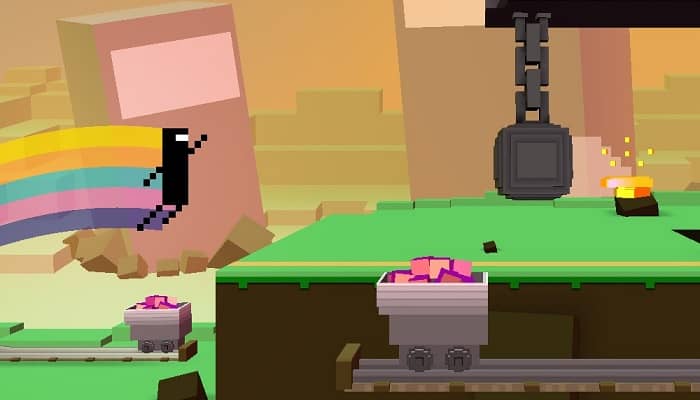 Next up is BIT.TRIP RUNNER, a 2D platformer that puts players in the shoes of Commander Video, a character that only otherwise appears in cut-scenes of the other games available on THE BIT.TRIP. Like the other games, at its core, BIT.TRIP RUNNER is a fairly simple game; players can perform actions such as jumping, sliding and kicking to avoid the oncoming obstacles though they cannot control  the direction in which Commander Video moves nor can they bring him to a halt. He just keeps running and running and running, I’m not even sure what the poor thing’s trying to achieve! Obviously, with mechanics like these, most of us are likely to repeatedly hit obstacles – don’t worry though because all that happens is Commander Video gets warped straight back to the very beginning of the course. Players may need to take regular breaks from BIT.TRIP RUNNER purely so they don’t get so frustrated that they bite a chunk out of their controller.

The visuals in this one are vastly superior to the other, most likely because it’s the most recent. While Commander Video himself is still of only two dimensions, the world around him is a fully functioning 3D world with flora and fauna that react to Commander Video’s presence. Don’t be put off by the first couple of levels and their bleakness; as soon as mechanics like sliding are introduced the whole thing springs to life and becomes far more interesting. As in other BIT.TRIP games, the game plays to the soundtrack, which, again, is an upbeat chip-tune that grows faster and more complex as more obstacles begin to throw themselves at players. Compared to the other games that have few (though awfully long) levels, BIT.TRIP RUNNER is so much more of a game with 36 different levels, three of which are boss battles that span over three planets and offer a whole new aesthetic each – personally, it’s my favourite of the bunch.

Not dissimilar to BIT.TRIP BEAT, our next game, BIT.TRIP CORE, is primarily about preventing pixels from travelling to the side of the screen. However, this time, you control four beams that fire singularly from a square in the centre of the screen to the delightful chip-tune beat. Assuming players use a controller, the beams are controlled separately using the D-Pad and X button – thankfully, there’s no use of the motion sensor. To play this one it helps if you’ve great concentration, you really need to keep a close eye on all corners of the screen or, before you know it, 10 pixels have slipped underneath you and suddenly your playing for survival.

While it’s not as visually violent as BIT.TRIP BEAT, this game can also cause something of a headache. It’s just as though the animations aren’t as sleek as they could possibly be, even if most of it is just pixels moving horizontally across the screen. I’ve noticed that there are more similarities between this and Guitar Hero than the other games, having played Guitar Hero before moving onto review BIT.TRIP CORE, with the beams that become solid colour to blow what are effectively notes off of the screen. There’s no amazingly interesting or unique aspects about BIT.TRIP CORE, it’s a fun (while aggravating) casual game. 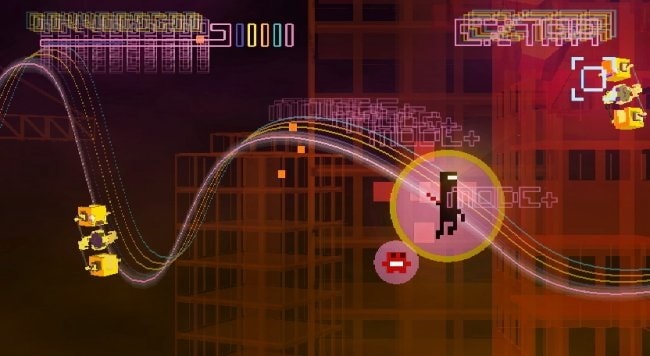 Okay, we’re past the half-way point now, only three more games to get through, the next one being BIT.TRIP VOID. This is the first game in the collection I played in which you have complete freedom of movement across the screen as a pixelated circle. The objective of this one is to collect black pixels as they fly across the screen (a seemingly common theme in these games) whilst avoiding the white pixels as they do the same. As I said, you’ve full freedom of movement and so, to begin with, you’d think it’s the easiest game in the world, just flying around the screen, dodging pixels that throw themselves at you in a constant, rhythmic fashion.

It’s not long before you realise that you’ve actually been growing with every collected pixel and suddenly the unusually vague controls (move and pop) make sense! For what it is, the fact that you grow is a surprisingly well thought-out mechanic. As you grow, you obviously take up more of the screen which makes it easier to collect the black pixels, however, you’re also becoming more and more vulnerable to the white pixels! You need to be strategic when it comes to “popping” (basically, shrinking back to the default size) so not to lose that satisfyingly huge combo you’ve managed to string together.

Again, it’s a very simple game at its core but, for something so small and basic, it’s a surprisingly good way to spend/waste time. It’s the kind of game made to play every now and then when you have a few moments spare with nothing to do. 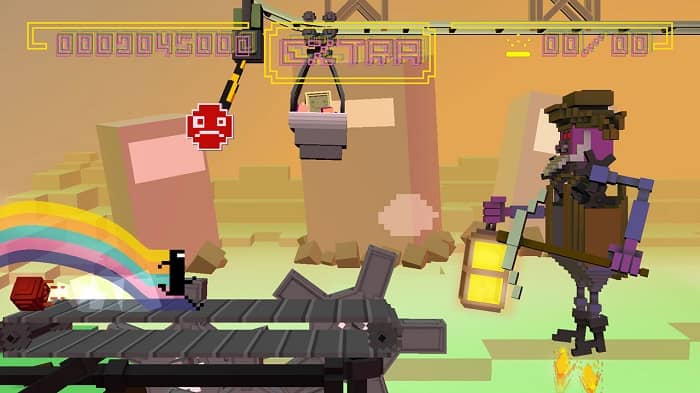 So, I’d sat back down ready to get on with the next game, BIT.TRIP FATE, ready to play another simple and yet challenging rhythm based game when I was met with the control screen. Left analog stick to move, right to shoot? A twin-stick shooter? How unexpected… Then I got to the game where I was left even more bewildered. I can only describe BIT.TRIP FATE as a 2D on-rails shooter with bullet-hell elements. You take control of Commander Video again in this one, though he’s not running any more. This time, you control which direction Commander Video moves in, however, he seems to be restrained to one of those party games where you’ve got a hoop that you need to guide along a metal rail without touching it. Yeah, one of those.

Like BIT.TRIP RUNNER, BIT.TRIP FATE features 3D assets, including the enemies and obstacles, while Commander Video remains 2D. While it isn’t a twin-stick shooter after all, you still fire projectiles in a similar fashion. You begin firing a single stream of pixels, progressively upgrading the attack depending on how well you’re doing. There’s also a buddy system through which you come across pick-ups that are actually “buddies”, including CommandgirlVideo who appears in Runner, and Meat Boy, who not only appears in Runner, but also has his own widely loved title, Super Meat Boy. Buddies basically just uniquely alter your projectiles in some fashion.

If you’re looking for games you can play to kill a bit of time, or just something you can pick up and put down throughout the day, THE BIT.TRIP is exactly what you’re looking for all wrapped up with a neat little bow. Sure, some of them may be liable to give you a headache if you play them for too long thanks to their “busy but basic” graphics, but the quality and variety of gameplay throughout shines. Simple and addictive, THE BIT.TRIP surely isn’t going to be everyone’s cup of tea, but for those that gel with its frustratingly difficult yet mesmerising rhythm based gameplay, its an absolute blast. 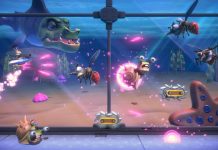 Bubsy: Paws on Fire is Coming to Switch in August 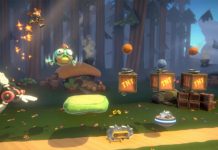 Bubsy: Paws on Fire! is Good, But Different