Let me start by admitting I’m a great lover of turn-based strategy games.

From Final Fantasy, Lord of the Rings: The Third Age right through to the recent epically punishing Darkest Dungeon. There’s something satisfying about making tactical choices in a controlled planning stage and then watching those decisions enacted out, witnessing either the success or failure of your strategies with a kind of powerlessness which makes it all the more tense. Concealed Intent is quite an intriguing spin on the turn-based format, but one that, unfortunately, is not entirely successful.

I hate to be discouraging to up and coming game devs, especially as not so long ago I was looking to become one. Jarrah Technology clearly put a great deal of time and energy into Concealed Intent, and for that I give them credit where credit is due. There are a lot of aspects in which this game succeeds, making it all the more tragic that overall it does not quite hit its mark.

Perhaps the first and foremost failing (ironically, given its title) it that it is difficult to see what the intent of the game is. Is the focus on stealth or combat? A mixture of both? Neither strategy or combination seems to work well. In Campaign mode, most of the enemies spawn already upon you, so there is little of the exploration, detection and hunting promised in the game dev videos. In Skirmish mode, this is less of an issue as generally you do have to discover where your enemies are lurking. Given Campaign mode will be where most players go first, this, however, more than a little disorientating.

The mechanics of detection mean that in order to hit ships you need to uncover them using omni or other forms of radar. However, employing omni draws attention to your craft and makes you easier to detect. The problem with this mechanic is though it presents intriguing choices when engaging from medium to long range distance, it becomes absurd in close quarters in which a pirate barely 100km from your craft is more difficult to hit than a pirate 2,000km away that has previously been picked up on a scan. In addition, it leads to your turns becoming a series of binary decisions. Do I turn omni on or not? Do I move or not? Do I shoot or not? Compared to the previous turn-based games I have cited, in which any turn presents hundreds of options (and these options in turn dependent on previous decisions in game, such as which abilities are learnt, which items have been discovered and so on), it seems to lack that tactical depth which modern players have grown accustomed to. 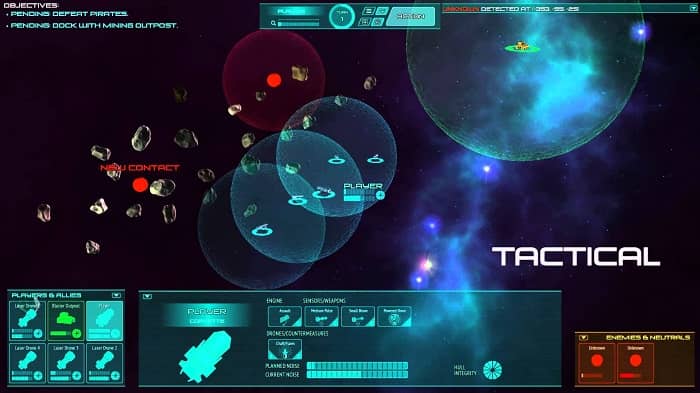 Once your actions are selected and committed, both player and opponent’s actions are enacted together. This is unique amongst most turn-based strategy games I have played, though I have seen it before in the table-top war-game X-Wing. In X-Wing both players choose their moves, concealing them from the other player, and then play them out simultaneously. X-Wing is unique amongst table top war-gaming for this gameplay feature as the majority of table-top war-games involve alternating turns. X-Wing is finely tuned, enjoyable, and moves at a fast pace because of this special feature. It also comes closer to simulating the real instinctive and pre-emptive nature of dogfighting, conveying an added sense of realism to a sci-fi universe.

Concealed Intent sadly does not achieve the same heights as its table-top relative.  This is partly because the enactments during the action phase are so fast that it is hard to appreciate them or even determine which of your decisions made an impact: half the time I am not sure I am simply lucky the laser-fire misses as opposed to it being due to a decision I have made. This undermines not only the strategic elements of the game but also the visual aesthetic. On the whole it is a very good-looking game, with solid animations and sound. Seeing your decisions played out in what feels like fast-forward detracts somewhat from this aesthetic, making it tinny. 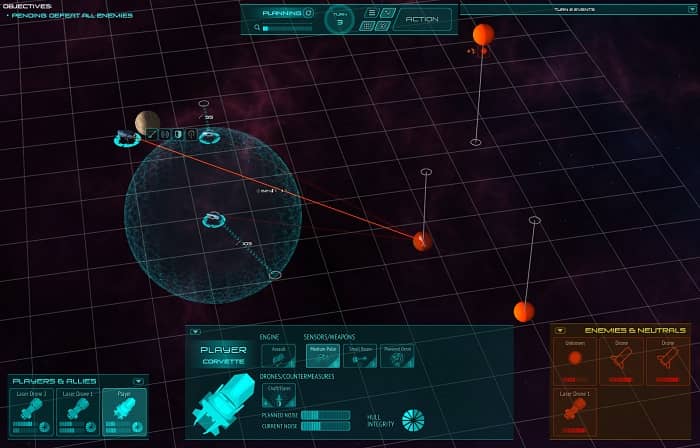 There are also smaller gripes which are exacerbated by the other issues with the game. For example, the camera manipulation is extremely clunky. Clicking on a vessel centres the camera on that ship, which is one of the most useless positions for the camera to be in as generally the player needs a wide field of view. In addition, setting a waypoint for your ship to move to is as easy as right-clicking then left-clicking, but to take it back you have to right click on the ship itself, click on the “add waypoint” function, add another useless waypoint and then finally you can access options to undo your waypoints and start again. Why not be able to simply tap a button to undo? In a game where so much emphasis has been put on precision of movement, gamers will want to be able to quickly adjust so they can get their movements absolutely perfect; these control shortcomings do not facilitate players but rather inhibit them. Of course, it is still only in early access, and there is room for the game to be tweaked and adjusted.

The difficulty level is wildly up and down across all the game modes. The first few levels of the Campaign can be completed without any real tactics. The third level, in which you have to defend a ship and base from a pirate attack, suddenly pits you against ridiculous odds. The following level is then tutorial-easy. In the Skirmish mode (where you battle a computer AI), you can find yourself impossibly outnumbered and outgunned or else able to deal with a measly pair of attack ships in two rounds. The Online battle system, while an interesting prospect, and certainly one I can imagine becoming popular provided the game is tweaked, is not yet populated enough for it to be reviewed. 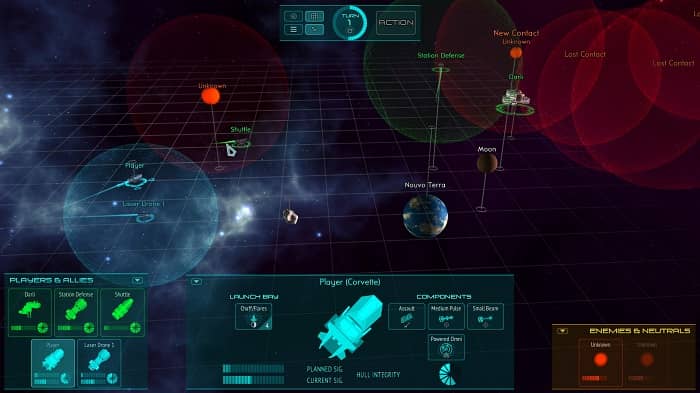 Even where the Concealed Intent gets it right, it unfortunately is marred with imperfection. The sound and ambience has been well thought out: the simple electronic music creates a traditional sci-fi ambiance that will make you think of the grand and expansive universe of Asimov. During the encounters it builds the mood and tension without being melodramatic. The small jarring note is that the background ambience abruptly stops when you move from the planning stage of your turn to watching the enactment, breaking the atmosphere and drawing attention to stilted aspects of the gameplay. It would be far better to have the sound continuously running through. Furthermore, the ambiance track restarts again when your next turn begins, making it repetitive rather than immersive . The immersion is similarly broken by the less-than-engrossing dialogue in the Campaign. Problems with dialogue are very common for small indie teams and often forgivable (after all, most professional writers would admit dialogue is the hardest aspect of story), but only when the rest of the game is punching its weight.

It is a shame Concealed Intent does not do better. It has many ingredients I am sure players would love, and is attempting to offer something a little different from the all-too-common shoot, shoot and more shoot sci-fi games we are saturated with. My suggestions, given this is only Early Access and I have perhaps been hard on a game that self professes it is incomplete, are to firstly think more carefully about the controls; secondly, to work with a writer on the dialogue (many writers would do this work for free or very little as a chance to gain a credit); third, change the sound so the ambiance is unbroken; and last, tune the tactics. The game has potential, but as it stands, to quote a sci-fi masterpiece, this is not the droid you are looking for.

Concealed Intent is available on PC.