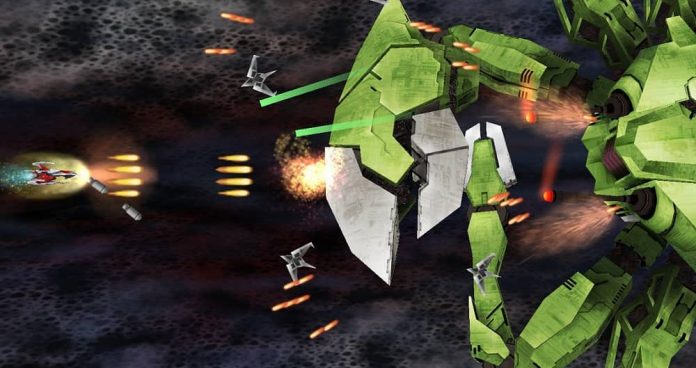 Imagine a bobsleigh event with competitors jumping down the icy tunnel at the same time, being pounded by hundreds of tennis balls.

The balls ricochet everywhere, hitting spectators, smashing windows and billboards. Salmon on their way to spawn whistle over their heads as they perilously vault over inclines and soar through flaming hoops. The lucky few who made it come to a halt, relieved that they’ve managed to survive. A tiny Japanese man named Degica totters up to them, dressed from head to toe in traditional garb, wooden sandals and all. He’s got an immaculately groomed moustache, curving at the ends like wisps of fire. His tiny circular glasses perch on a little rounded nose and conceal amused, beady eyes. Raising his bony fist he pats you gently on the head, and curves his aching back until his lips brush your ear. He whispers “Again.”

Welcome to DARIUSBURST Chronicle Saviours. It’s remarkably similar to the outrageous bobsleigh event I’ve described, and you’re likely to survive for about as long as it takes to say the title of the game itself.

Published by Degica and developed by Pyramid and Chara-Ani, I have to be honest and say I’ve never played any of their previous DARIUS games. However that comes as no real surprise considering this franchise seems to be bigger in Japan than anywhere else, originally finding itself in arcades before being ported over to Steam, PlayStation 4 and PS Vita.

At its heart, it’s a side-scrolling space shooter where you find yourself battling through hordes of enemies in varied environments. You control your ship using the arrow keys or WASD, and shoot using Z. You can face in the opposite direction using X, whilst C and V use your ultimate ability in one big burst or in a controllable burst respectively. 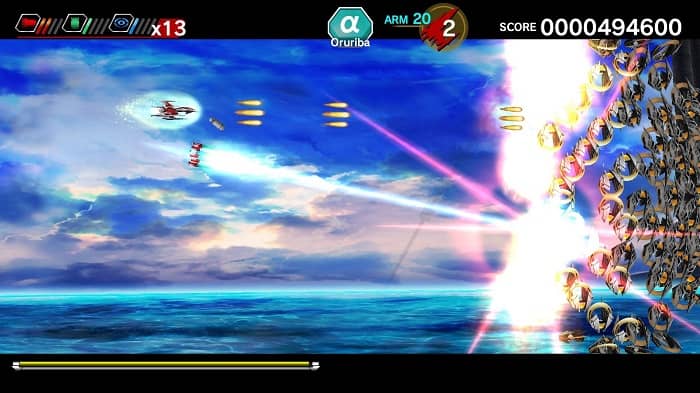 You can choose from different game modes: Arcade Mode or CS Mode. Within Arcade, you have the option of Original, Original EX or Chronicle mode. Original refers to a standard playthrough, EX just means an extra hard version, and Chronicle mode features an overwhelming amount of stages that can be unlocked by players in your “cabinet”. Whilst I can’t claim to store other human beings in my cabinet, I believe this refers to the groups you’re assigned to. When you load up a game in Chronicle mode, you’re assigned a cabinet with a bunch of others and every time you beat a stage, you all unlock that world for play. It just adds an element of competition between different cabinets to unlock the stages in a sort of space-race.

I played the Original Mode because I like to keep it clean, simple and above all, original. I selected my ship which was named something vaguely resembling “Super Duper Special Blaster – Z”, as the distinction between the ships wasn’t made exceptionally clear. It was a case of trial and error in terms of selecting ships and seeing if you liked their style or not, as they all shoot and handle a little differently.

I then suddenly found myself in space with crazy robots attacking me.

The gameplay is brilliant; it’s fast and overwhelming, but in a good way. Imagine a couple of people stood on either side of you holding the ends of a large skipping rope, your aim being to… well, skip. They start at a blistering pace, the rope gets tangled and you crumble to the floor with an uncomfortable and unflattering crash. This happens over and over again, but you fight back the tears and keep on trying. You manage to skip a few times, until you find yourself skipping a dozen times, gradually building an affinity for jumping in quick succession. Eventually you’re skipping at a phenomenal pace until a giant robotic turtle starts shooting lasers at you. Another accurate portrayal of playing DARIUSBURST Chronicle Saviours. 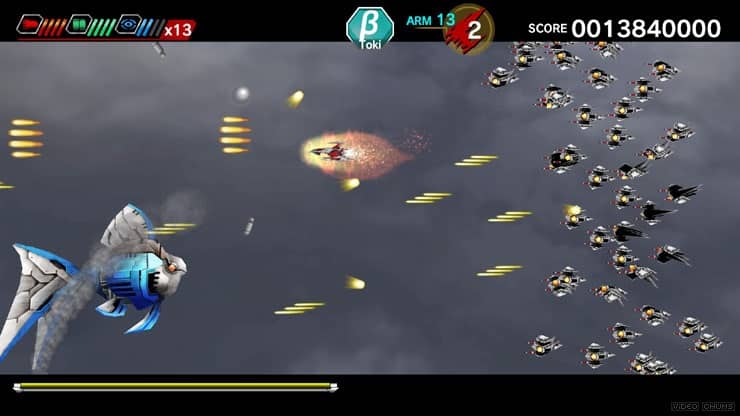 The controls feel beautifully responsive as a you weave in and out of laser beams within inches of your life. Each ship fires a little differently, however you can collect different coloured orbs to do certain things. I say certain things because I don’t really know what they do; I collect them and good things happen. Gold orbs explode everything in the vicinity, green seem to provide a shield and others upgrade your ship’s guns to pretty cool effect – effectively turning your puny little water pistol into a minigun.

There’s a bunch of different enemies, some functioning like a shoal of herring as they group together and wind in front and around you. You might have to deal with hulking great turrets and bigger badder enemies with all manner of ridiculous equipment. I was always kept pleasantly surprised by the variety of baddies and it was never boring or stale shooting them up.

As you complete missions you’ll get to choose which world to jet off to, with the aim of reaching the final stage and defeating the final boss. Each world has a neat feel to it, aesthetically and in terms of gameplay. As you approach tougher missions you’ll find yourself up against meteor showers and little space bases that you’ll have to dart your way through. Let’s not forget the quality soundtrack; it’s pulsating and rather epic, what you’d expect from an arcade game of course.

The highlights were undoubtedly the big boss battles. The theme of the bosses I’ve actually been alluding to throughout this review, dropping in salmon and herring when appropriate(ish). That’s right, each boss is aquatically themed, so it came as no surprise when I came up against a giant mechanised lion-fish. They’re difficult battles and each victory feels like a real achievement. I have no idea how you’d play through a boss-battle in an arcade without spending hundreds of pounds on retries and “continues” but thankfully I could smash enter and keep going. There’s a number of stages and patterns to each boss and in order to win you’ll need to recognise what’s coming your way and keep on your toes; the sea takes no prisoners. 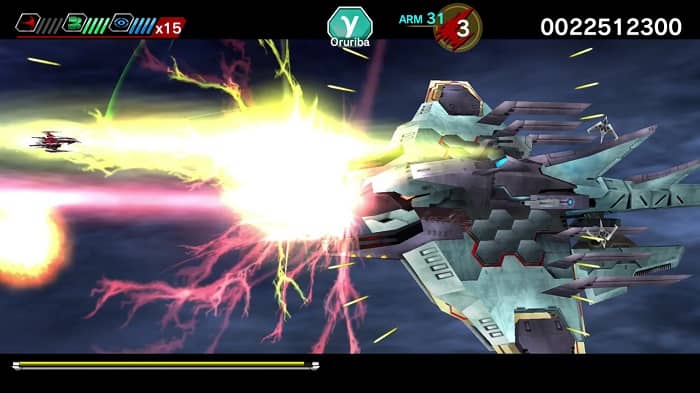 Perhaps the only gripe I have with the game would be its difficulty – and if you’ve read my love for Dark Souls, this is never usually a problem. At times it does feel like you just cannot survive. Sometimes the screen fills completely with enemies,  laser beams and all sorts of carnage. I cannot conceive how you could live through it. Maybe I just need to “git gud”, but I think a different reason – obviously more accurate – springs to mind: it’s better with friends. Couch co-op is always a great element to any game and it applies strongly here. DARIUSBURST is very tough as a lonely little ship and I feel that it’s definitely designed for players in the arcades who want to jump in and play with their mates. It makes perfect sense as with up to four players it seems like a more manageable and fun experience.

DARIUSBURST Chronicle Saviours is a dizzying game and I found myself mostly confused and exasperated throughout, but it stays true to its roots – and it’s bloody marvellous. It’s a thrilling and maddeningly moreish arcade space-shooter that has a wealth of different game modes and thousands of levels. You may rage at the difficulty but I challenge you to not keep hitting that “continue” button.

DARIUSBURST Chronicle Saviours is available on PlayStation 4, PlayStation Vita and PC. We reviewed the PC version.