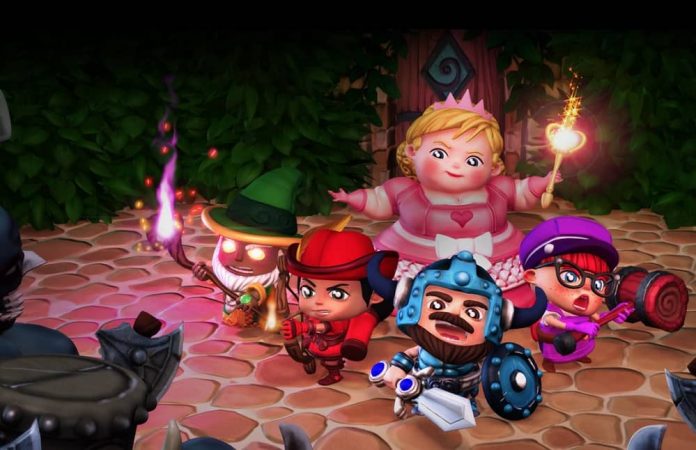 Sometimes, the winding road of progress can be a mixed bag.

Either you believe the older ways are the better ways, or you welcome change with open arms. Personally, I think the gaming industry operates on a large degree of rose-tinted rear-facing spectacles, but generally speaking, I fall in the category that believes progress is good. Sometimes, things are brought to the table which are better, and if there’s an interesting way we can innovate on classic ideas, while maintaining what makes it great in the first place, then I’m happy. Theoretically, this is how progress should be, and I think this is how we’ve progressed with video games. This year especially has seen some real advances in terms of details and games systems and it’s delightful to see.

Enter Fat Princess Adventures, a shallow, slimly designed Diablo-like. On the surface, Fat Princess Adventures is a hollow “me-too” of Blizzard’s immensely successful index finger exerciser, but it somehow manages to innovate even less than your typical Diablo clone. Gone are open, procedurally generated areas or dungeons; instead you have a world map which is guided by corridors, not openness or choice, and a combat system that is literally a one button press, occasionally two, but rarely do you need a second button. Square button attacks and does the job. Hold it in to charge an attack. That’s it, that’s all the combat training you need. Repeat, rinse until you turn your game off. 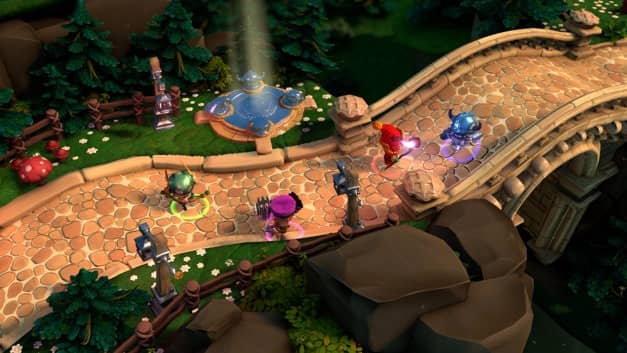 Okay, well before I get negative, let me tell you what’s great about it. The visuals are an absolute delight. It falls somewhere between Shrek and Little Big Planet with big heads and colourful, cute, unblemished visuals that are both hi-res and 60fps – it’s lovely to look at. The characters in the game world bumble around with adorable joy; in certain towns the local big-headed children follow you around, and your character, if left ignored, spews off genuinely funny one liners. There’s a lot to like about Fat Princess Adventures: it’s an adorably fun homage to fantasy tropes and attempts a kind of side-on sarcasm seen in films like Shrek that you can’t help but crack a smile at. Adventures takes full advantage of the PS4 – it looks gorgeous, it runs smooth as butter and it’s cute as all hell.

The character creation, too, is great fun. You’ll spend a good while putting a character together and it reminds me a lot of LEGO in that you can swap out details like hair, glasses, torso clothes, etc. It’s probably the most fun part of the game unfortunately, because what follows is a dimly shallow world of far-too-easy button bashing, mob-crushing ARPG redundancy.

Loot drops offer stiff damage upgrades and boosts in damage; rather than spicing up the formula with a little something extra, Fat Princess Adventures plays it completely safe. You’ll slay swathes of mobs and mini-boss creatures for some pretty dull loot, which for a game of this type is a nigh-on mortal sin. You are supposed to obsessively strive for that perfect companion weapon to help you sweep the floor with mobs, but here I just didn’t really care. Actual boss fights themselves are miserable – simple progress bar races, keep hitting the big thing until big thing has zero health points. They try to spice it up a little bit by preventing certain types of damage or forcing the player to be in a particular state to do damage but it’s a small gesture in the grand scheme of things. Why bother for such dull loot? 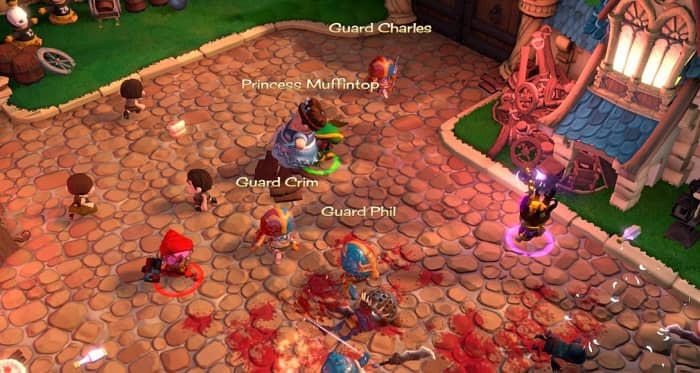 It’s not so much a problem that it’s boring to play, it’s just that I can’t help but think this kind of game is getting on a bit. Surely we’ve nailed this concept by now? Loot-driven action based RPGs are now the domain of the fantastic Torchlight 2, a game that really, in my personal opinion, took the clickety-clicking murder spree of action RPGs to its absolute end result. Fat Princess Adventures comes into a genre that felt stagnant a long, long time ago and it just needs to do a little more than be cute.

You’ll reach a town hub-area which bustles with colourful exciting detail, but be put off by the horrible curse of painfully inane side-questing. Games like The Witcher 3 have well and truly killed off the side quest and you can’t really get away with this kind of laziness anymore. Go here, collect things, probably have to button-mash your way through tiresome mobs along the way. Oh joy.

But you’ll be totally enamoured by the little things: wandering around the gorgeous town brought a lot of joy. There’s a host of neat little gags littered around; it looks gorgeous, and chin wagging away to the locals is genuinely funny – there’s some really great wry humour at work here, but then it tries to be an action RPG. It really wants to be loved. It really does. Fat Princess Adventures does its best to get your attention; it wants you to look at its pretty, colourful, zany exterior and, you know, it’s really hard not to smile at it, but you get locked into its corridors of enemies/mobs/loot and you get that familiar “I’ve been here before” feeling – and you have that feeling because you have, a million times, in more interesting ways than this.

Fat Princess Adventures is an admirable, cute game which fully utilizes the power of the PS4. It looks gorgeous, it makes you smile and has a great deal to love. Unfortunately, it all gets spoiled by shallow systems wrapped in all too familiar ARPG clothing. Buy it for its humour, for its sweet atmosphere, but not for the gameplay.