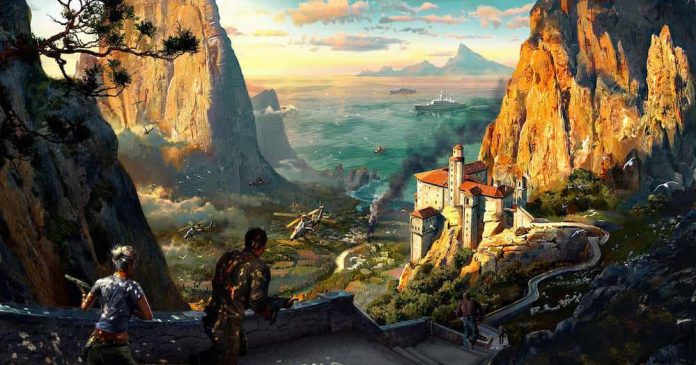 “F@!k you missile!” proclaims Rico Rodriguez before he grapples the rudders of the gargantuan projectile he’s standing on to steer it off course, just in the nick of time.

It’s also what I shout a lot when trying to pilot any of the game’s helicopters near an enemy-controlled outpost, attempting (and mostly failing) to avoid a barrage of surface-to-air missiles within seconds of drawing close. These two instances sum up what Just Cause 3 is pretty succinctly: loud, mindless fun with lashings of frustration. Oh, and don’t forget the sprinkling of technical issues that mire the entire experience, often turning what should be a rush of adrenaline into soul crushing boredom.

So let’s start with the bad. Playing on PS4, I can safely say that Just Cause 3 has the longest load times of any game I’ve played on the platform. From launching the game on the dashboard to taking control of Rico, you’re wasting around five minutes of your life waiting for the game to get you to the title screen, log you in to the game’s servers and then load up the game world for you to play. Now, I wouldn’t mind if the long initial load time made way for shorter load times within the game for such instances as reloading when dying or starting a new mission, but no, every time you die or want to start a new activity you have to sit there staring at a boring loading screen. Sometimes it’ll be for 30 seconds, other times it might be for over three minutes; the load times are baffling in their inconsistency and really dampen your desire to play the game when you’re dying frequently or repeatedly trying to beat your score in a challenge. Some may wonder if the load times are somehow linked to the game’s insistence on connecting to servers to provide leaderboards for nearly everything you do – which have been admittedly flaky before launch – but even turning off the PS4’s internet connectivity yielded no noticeable load time reductions. 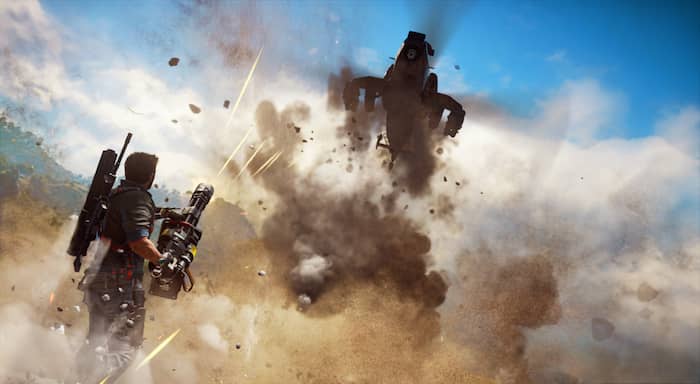 On the subject of the game’s reliance on being connected to its servers, if you have an unreliable internet connection or if the game’s servers are having troubles, then make sure you add some padding to a wall in preparation for you bashing your head against it repeatedly. Whenever a connection with the server is lost, someone thought it would be a good idea for the game to try and re-establish connection immediately. What this entails is up to a 30 second wait while the game tries to connect, and if it can’t, it’ll let you either retry or go into offline mode. However, offline mode doesn’t really mean offline mode in this instance. What it means is, is that it’ll let you play the game, but every time you want to look at the map or consult the menu for any reason it’ll try to reconnect again of its own volition. After spending a couple of playing sessions constantly disconnecting and reconnecting to the server, having to wait 30 seconds or so each time, my frustration level with the game was so high that I had to just disconnect the console from the internet.

When you’re not being bored or bothered by Just Cause 3’s loading or connectivity issues, you’ll probably just be disappointed with its poor performance and rather lacklustre campaign. For the first few hours of the game you’ll find that the framerate has its hiccups, but generally it all seems quite serviceable as you complete a handful of story missions and maybe liberate a couple of settlements. As you progress further and the action picks up however, with you frequently finding yourself tasked with taking out enemy bases full of fuel tanks, electrical pylons, water towers and a whole army to destroy, the framerate becomes noticeably dire, with regular bouts of slowdown affecting the action. If destroying everything you see wasn’t pretty much the aim of the game, then there’d be no issue, but as Just Cause 3’s main selling point and core game mechanic, it’s a serious oversight that such framerate issues have been left to persist.

Just Cause 3’s story campaign is typically ridiculous with its over-the-top characters and situations, but unfortunately the 27 missions that it is comprised of are surprisingly dull. Too many missions boil down to either escorting or defending equipment and NPCs, which is neither fun nor interesting, especially when the latter exhibits stupid AI. Should you die or fail your objective, which will probably happen a lot due to your enemies’ relentless assaults that often require you to be at the right place at the right time with little forewarning, then you’ll be at the mercy of a checkpoint system that often starts you back up with your companions or the object you’re meant to defend close to death or destruction. Eventually this can begin to grate, especially when you’ve progressed quite far through a lengthy mission and find yourself up against insurmountable odds just after a checkpoint has triggered. 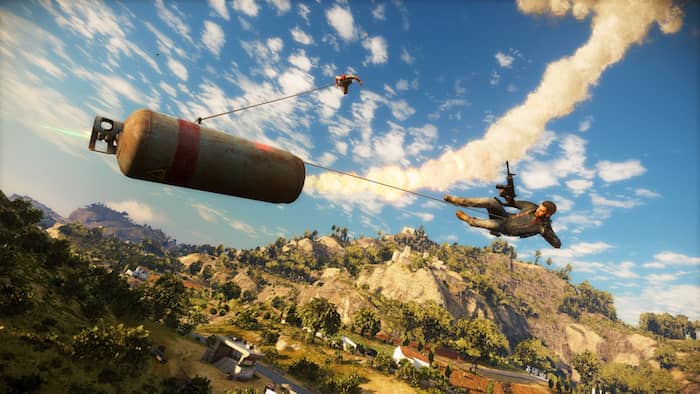 In fact, Just Cause 3 is quite a tricky game across the board, and it’s largely due to its controls which are best described as finicky. Controlling vehicles such as cars and motorcycles is not a great deal of fun due to some awkward quirks and physics, but more troublesome is the game’s aiming system which is simply awful. Being bombarded by enemies via the land, sea and air isn’t a great deal of fun at the best of times, but when you’ve also got to wrestle with a game’s piss-poor aiming system that features an inadequate reticule and inconsistent auto-aim then your patience quickly goes out of the window. You can unlock the ability to aim down the sights fairly early in the game, but as it doesnt really help you that much and forces you to walk whilst aiming, you quickly abandon it in favour of running and gunning.

Putting aside all the negatives, it’s nice to be able to say that supporting the main campaign are a few activities that are actually pretty enjoyable, which is lucky considering that the main diversion even acts as a gate to your campaign progress: taking over enemy controlled outposts, bases and settlements. Although freeing these areas from enemy control could typically be seen as repetitive – they all share objectives from a small pool that basically boils down to destroying objects and pressing buttons – they actually rarely are, and it’s all because of Just Cause 3’s major strengths: the quality of the huge world that it presents to you, and the freedom that you have to destroy it. Whether you chose to use guns, vehicles, grenades or even your grappling hook, your targets collapse and explode in a way that just brings joy. In fact, Just Cause 3 has the best goddamn explosions ever seen in a game, and trust me, you’ll be seeing a lot of them throughout its lengthy running time. 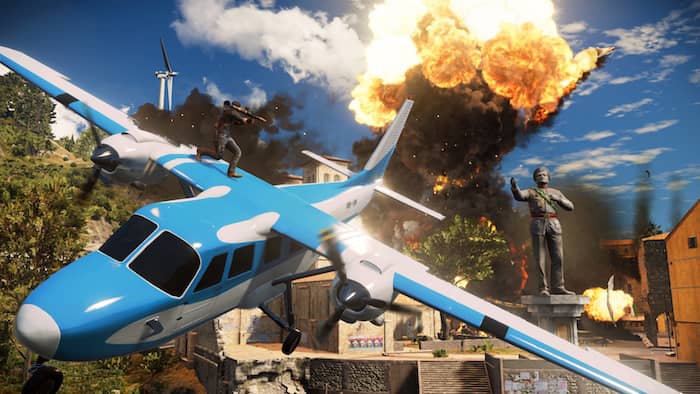 By liberating outposts and settlements you unlock additional activities to undertake, with the most worthwile being challenges. Split into numerous categories each with their own objective, completing challenges enables you to earn up to five gears, with upgrades to Rico’s skills and equipment being unlocked as you accumulate them. From unlocking nitrous for your vehicles to turning your planted explosives into rocket boosters, the upgrades – or “mods” as the game likes to call them – offer some semblance of character development and are indeed useful, but rarely feel essential or even worthwhile to unlock in the long run.

When Just Cause 3 allows you to creatively deconstruct its world on your own terms, you momentarily forget its technical shortcomings because you’re having too much fun to care. Even when you’re being attacked from land, sea and air, resulting in many irritating deaths, you’ll come back for more, just because it’s cool blowing stuff up. Unfortunately however, its never too long until something ugly rears its head that you simply cannot ignore, such as a severe case of slowdown, an overly long load screen, or simply a drastic difficulty spike. At the heart of Just Cause 3 is a decent game with some unique ideas and unequalled explosive destruction, but it’s buried beneath so many poorly implemented game mechanics and technical issues thats it’s often hard to hear its beat. Hopefully Avalanche Studios will perform some CPR shortly to make the heart beat stronger, but until then Just Cause 3 is a hard game to recommend.

Just Cause 3 is available on PlayStation 4, Xbox One and PC. We reviewed the PlayStation 4 version. Buy now from Amazon.