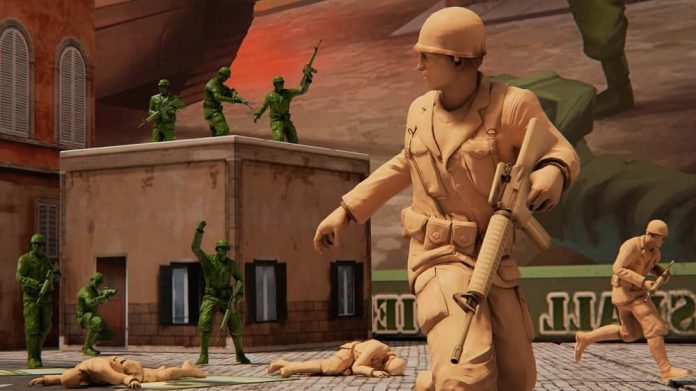 Back in the days of childhood, when almost every kid owned a tub of miniature army figures, they created a world of thrilling combat with just the power of imagination.

Developers Virtual Basement bring this dream to life with their latest game The Mean Greens: Plastic Warfare, giving the static figurines free movement, an arsenal of various weapons and several immersive and wacky environments to run amok in. It’s a pretty polished effort, but you may still find there’s a few soldiers missing from the bucket.

The Mean Greens is an exclusively multiplayer third-person shooter where players take control of a plastic soldier and partake in five-a-side deathmatches. Pretty generic right? Wrong. This game boasts a wide variety of locations within different rooms of the household. Think Toy Story meets Toy Soldiers. Want to wage war against plastic dinosaurs in the freezer? How about facing off against the plastic Kraken in the bathtub? And, hey, those kitchen worktops look like the perfect place for some straight-up gun battles. There’s plenty of variety when it comes to challenges and game types too – it’s not just simply a case of your little green men shooting against the opposition. You’ll find yourself playing “capture the flag” in a fish tank, racing against the clock to melt ice in a freezer, a game of domination on a moving toy train as it circles around a Christmas-themed living room, and taking part in farmyard table football just to name a few. It’s far from your Call of Duty multiplayer and that’s the intention: the key of The Mean Greens is just to have as much fun as possible. 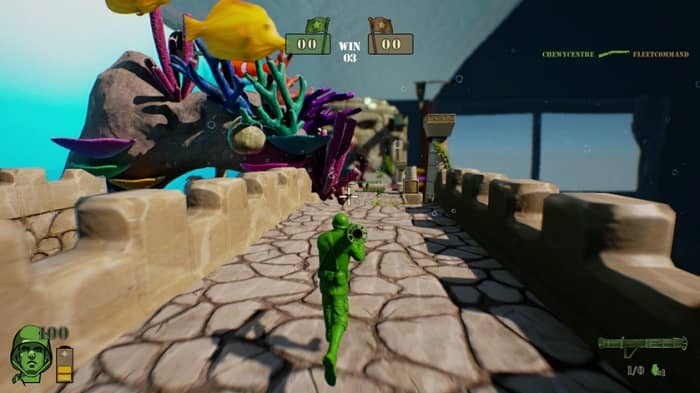 Every player is equipped with a machine gun, shotgun, sniper rifle, bazooka and flamethrower. This is great as it creates some inventive ways of killing, but on the flipside, everyone having the exact same weapons takes away any chance of player customisation or idiosyncrasy. It does mean, however, that you’re able to jump straight into a game without having to worry about setting up the optimal load out combination. The ammo in the guns is plentiful so the player can shoot all day long. Everything in this game is tailored towards jumping straight in and having fun.

The game features a vibrant art style with an abundance of colour at every turn. The colossal household items serve as great platforms and there are several ways to approach a single destination. The games are also accompanied with a great soundtrack with an exciting fast paced selection of jazz and jolly orchestral music.

Another feature that makes The Mean Greens: Plastic Warfare unique in comparison to other multiplayer shooters is that there is no levelling system. Everyone stays at the same rank so there’s no bias for people who’ve slaved away for days on end, meaning new players can easily fight against veteran players. Of course, you could argue that it detracts from the game’s replayability factor as it means there’s little reward or purpose to putting a lot of time into playing. 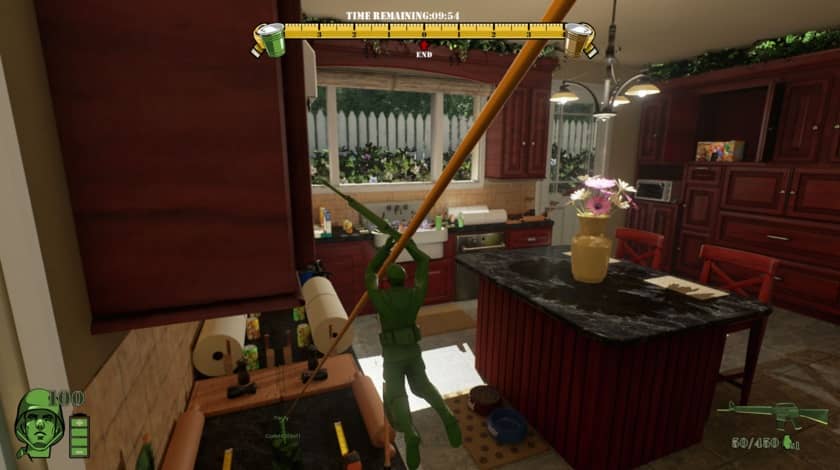 It’s not all bad, though. Most importantly, The Mean Greens is downright fun to play. It doesn’t take itself too seriously, and even though you might not be willing to sink days on end into playing, it’s sure to offer plenty of entertainment in short bursts. The excellent matchmaking system within the game helps with this: I always got a match within 30 seconds of turning on the game and there’s no faffing about with empty servers as there is a “join game” icon located in the main menu, ensuring you’re always put into a game that’s already populated.

The Mean Greens: Plastic Warfare may a stripped down effort of a shooter, but it thrives in its simplicity and creates fun and hilarious situations with every match. Its lack of customisation may turn some players away but with the potential for DLC and at a meagre £10.99, you really can’t go wrong.

The Mean Greens: Plastic Warfare is available on PC.