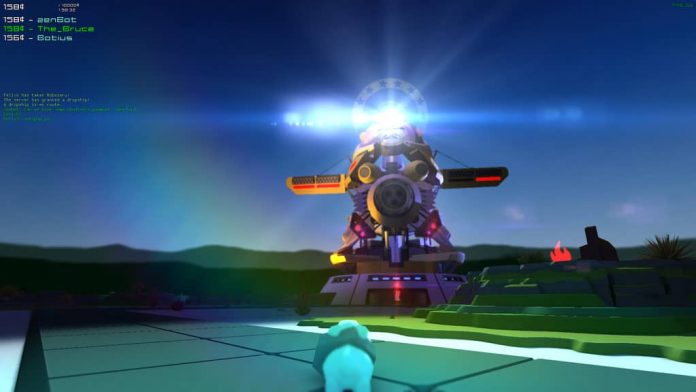 Dan Dez is a genius.

In over 25 years of playing video games I don’t think I’ve ever played one that made me think more about myself than his latest game, OBEY, does. This is a one of a kind multiplayer game where no one can be trusted, everyone is a potential threat and you have only one choice to make – will you obey?

The aim of the game is fairly simple – make the most money and you win. Getting that money is the hard part. Each player is in control of a bunny – a fluffy, harmless, anonymous rabbit – with which they’ll navigate the map, pick up and deposit items and and either obey or subvert the current overlord. Each map has, at its heart, a giant monkey-headed robot with torches for eyes and a massive gun for a… well, everything else. If a player reaches this monument they can take control of it, netting themselves a 10x boost to the steady stream of cash each player gets as a matter of course. But, to stay in the robot, you’ll need to either convince your opponents (there are no friends in OBEY) to help you out – for which you’ll offer them cash incentives – or you’ll need to put your dictator hat on and lay the smack down on any revolutionaries; mercilessly filling the landscape with charred bunny corpses.

But even the corpses will come in handy. You see, there are many, many different ways to play this game – it’s entirely down to how you, as a person, want to behave. For example, you can give the appearance of obeying while being an utterly subversive so-and-so. The robot needs certain items to keep going – uranium boosts the cash flow, rockets enable the player in the robot to fire… well… rockets, fuel gives them access to the flame-thrower, batteries power up sensors, etc. So those bunnies who choose to obey will find themselves briskly following orders to pick up items (bought at the players’ expense and delivered by drop-ship) and drop them off in a feed box to get an automatic reward. If you’re brave, you can attempt to withhold items until the player in the robot forks out a few highly-priced auto-payments, or you can slip a few of those old bunny corpses into the feed box to severely penalize the robot player. 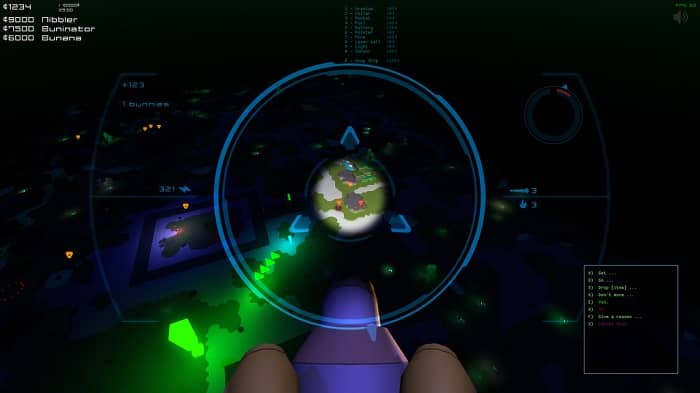 Ultimately, the real question is whether to attempt to take control of the robot for yourself – while it sounds difficult, it’s often more a question of daring and will than of ability. The robot’s field of vision is severely limited to a small, lighted area (monkey eyes, remember?) that moves as you look around the map so it’s quite easy for bunnies to hide themselves from the deadly, prying eyes of the robot. However, the robot player can choose to demand that all bunnies wear collars – they limit your carrying capacity to only two items and grant a boost to your cash flow but the robot can see where you are at all times and can detonate one or all of the collars, should they wish, taking any potential revolutionaries out immediately.

It’s pretty easy to slip past the watchful eyes, though. Wait until your overlord is busy with something else, slip off the collar near some handy cover and you can all but disappear for a few minutes until the robot player has forgotten all about you. Don’t be so foolish as to make a bee-line for the robot straight away: there may be additional defences (as well as the epic machine gun, rockets and flame-thrower) at work. Obeying players can plant sensors, lights and laser walls to make it more difficult to assault the robot and, while your bunny is small and often easy to hide, one bullet and you’re just another big-eared corpse. You could, instead, try popping some lasers behind the feed box and throwing yourself in to make some handy, difficult to see (and, therefore, destroy) corpses or, perhaps,  turn off the robot’s power generator – stymieing the increased cash-flow that the player receives. The possibilities for the little bunnies are endless.

In four paragraphs you’d think that I might have covered pretty much all of the game mechanics and might be ready to move on to, say graphics or audio or something. Well, you’re wrong. The above barely scratches the surface of what OBEY has to offer. Sure, I’ve got most of the items in there, some basic tactics and even a little advanced play, but the heart of the game doesn’t have anything to do with the digital tools that you have at your disposal – OBEY isn’t about the robot, it’s not about the bunnies, it’s about YOU.

OBEY really comes down to what type of person you are. Are you a leader or a follower? Do you have what it takes to make others toe the line? Will you kill, indiscriminately, to get your way? What will it take for you to fall in and behave like a good sheep? What will you do to survive? You could be a ruthless bastard – the instant a bunny doesn’t do what you want you gun them down, you shepherd them closely to and from the feed box; if they so much as step off the path they get a nice fat rocket between their cute little ears – or you could be a benevolent overseer, doling out extra payment for good deeds, allowing more leeway in terms of collar wearing or freedom of movement. There’s no set course, no best way. If your grip is too tight, bunnies could slip through and – if you’ve been Mr. Nasty from the outset – they might want to take some revenge. If you’re too nice or take your eye off the ball, there will always be someone more ruthless, more cunning and more willing to usurp you and take control for themselves. 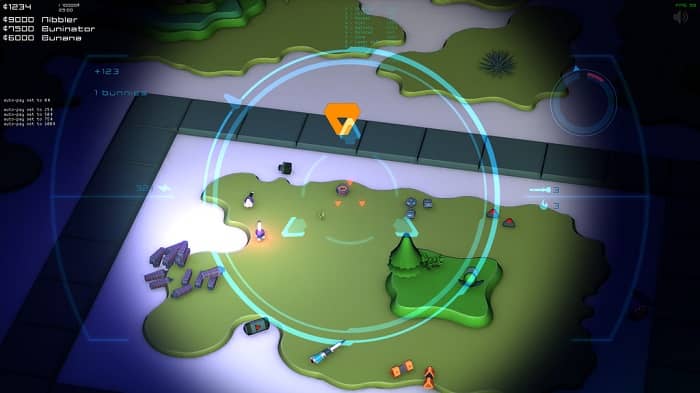 OBEY is a multiplayer game. The most rewarding gameplay comes when you find yourself playing with other humans. Though, it must be said, the AI in OBEY is excellent – each has their own personality, their own patterns of speech (texting, really) and they feel rather well rounded. But there’s nothing like being able to lord it over people from the robot – apart, that is, from sneakily worming your way into confidences, secretly hatching subversive plans and then doing your best evil laugh when you kick someone out of the robot. Usually, I steer clear of multiplayer games – especially where heavy interaction is concerned – I’ve been on the receiving end of too much grief in my life to go out of my way to encourage more – but the OBEY community is quite unlike most other multiplayer communities out there.

Perhaps it’s because of how you’re supposed to act in the game: you’re supposed to grief people, you’re meant to lie and cheat, you’re encouraged to sit in your high tower and snipe people. That kind of thing is incredibly cathartic so, in the end, what you get is a rather fine bunch of people from across the globe perfectly at ease, more than willing to help you out and teach you how to play and then lead the revolution to kick you out of the robot (or stash corpses in your feed box – Dez actually taught me that one). One minor niggle is that, in order to fully appreciate the intricacies of OBEY, you’re going to need to grab your mic. There’s a text function (press “t” and type) for both the bunnies and the robot – and the robot has a rather well thought-out text generator with a lot of common and useful phrases at your fingertips – but neither really comes close to being able to actually talk to people. When you can hear the overseer’s voice and they yours, it makes it so much more real – you’re really there, in this power-struggle, and you’re lying your ass off to try and get him to look the other way so you can hide behind this rock, sneak out and BAM! I’ll just have that robot, thankyouverymuch. 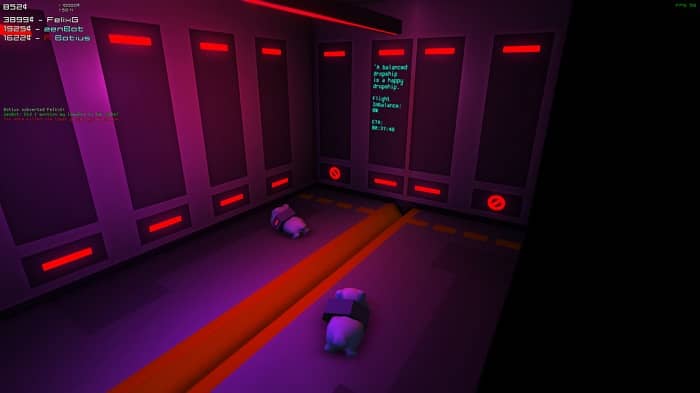 So, after playing OBEY, what DO I think of myself? I don’t think I can cut it as a dictator. Perhaps it’s because I’m just not forceful enough. Perhaps it’s easier to follow than to lead (but, believe me, you can definitely win in OBEY by following). I even found it hard to commit to a general strike when the other bunnies and I were stockpiling weapons and uranium behind the feed box in the hopes of getting more cash (I caved and got a nice fat reward for it – take that Arthur Scargill!). I used to think I could be just about anyone in a game but, as I said, OBEY made me rethink this. Perhaps I’m not as capable as I thought I’d be at playing a role – at switching out my personality here and there to experience the other side of the coin. Every game of OBEY I’ve played I’ve lost – not because I didn’t try to subvert; I’m actually pretty good at getting in the robot, the problem is that I’m terrible at keeping all the other bunnies in check. I either spend all of my money paying them to keep them sweet or I take my eye off that one guy and, next thing you know, I’m back on the grass with a fluffy little cotton tail in my face.

Video games have always wanted to hold a mirror up to life but none, in my experience, has done it quite so well as OBEY. Dan Dez has even said that he’s planning on adding more features to the game but, for an Early Access, this is one of the most polished and ready-for-release games I’ve played this year. I may be one of life’s sheep, destined to always to pick up and drop off items and collect what auto-cash drops I can, but you have a play with this game for a little while, I dare you, and see what you can learn about yourself. You might be able to lead but, once in a while, you’ll just have to OBEY. I’ve written “obey” too many times, now, it’s starting to look weird. Obey. Obey? OBEY.

OBEY is available on PC.