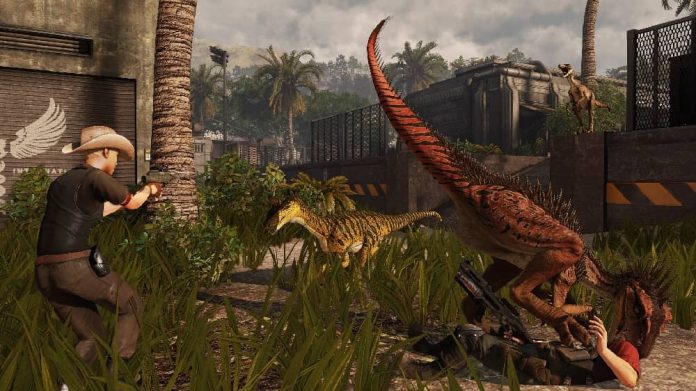 From the fearsome Tyrannosaurus Rex to the docile Brachiosaurus, they’re often portrayed as majestic creatures, but the truth is we’ll never know exactly what they were like. Perhaps the mystery behind them is what makes them so attractive to us though. After all, would you still be scared of a Tyrannosaurus Rex if you knew they were bumbling fools that couldn’t tell their arse from their elbows? (Hmm, do they even have elbows?) To say that they’re so admired however, it’s surprising that there are so few games featuring dinosaurs, especially good ones, and Primal Carnage: Extinction definitely does not change that fact.

As an online multiplayer game pitting teams of humans against dinosaurs, I kind of hoped that Primal Carnage: Extinction would be good. I mean, with a premise like that, just what could go wrong? Created by Circle 5 Studios in conjunction with Pub Games and Panic Button Games, Primal Carnage: Extinction can be considered as both a remake and sequel to the original PC game released in 2012. But whilst Primal Carnage received a mostly positive reception in 2012, this updated version just doesn’t have enough spit and polish to make it stand out as we reach the close of 2015, which is a shame, as for a small indie title it does show some promise.

The bread and butter of Primal Carnage: Extinction is its Team Deathmatch mode, which pits human against dinosaur on over 10 maps to decide once and for all which is the greater species. Whether you choose to be a human or dinosaur, there are five classes to choose from determining your playstyle and capabilities. On the dinosaur side, there’s the choice of the flying Pteranodon, the nimble (and fictional) Novaraptor or the hulking T-Rex to name but a few, whilst on the human side you have the choice of classes such as the Trapper, the Commando, or the Scientist. Obviously most people want to play as a dinosaur, with the T-Rex in particular being a popular choice, but you have to be quick, as the game limits how many dinosaurs of each type can be present at once. 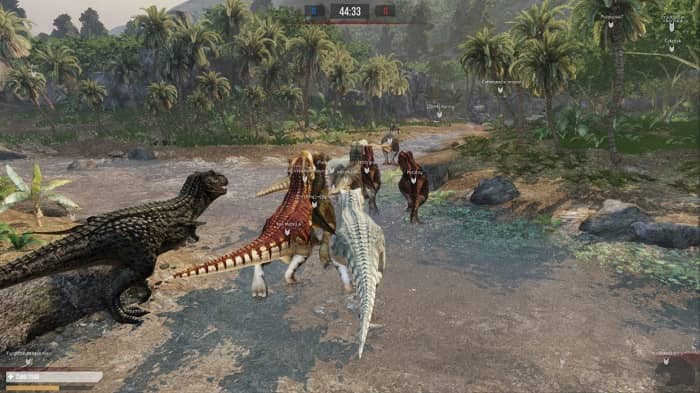 With its commendable number of maps and multiple character classes, Primal Carnage: Extinction as least offers variety when it comes to prehistoric warfare, but unfortunately it doesn’t do much to help it from getting stale fairly quickly. To say that most people will consider buying the game because of the ability to play as dinosaurs, it’s disappointing to say that of the two species they are the most troublesome to play as.

Playing as a human is the familiar affair of running and gunning, using a combination of your primary and secondary fire to keep dinosaurs at bay, but playing as a dinosaur is quite often a confusing and frustrating experience due to their stilted controls and unwieldy attacks. Raptors move around at great speed, making it hard for humans to land a hit, but also making it equally hard for you to pounce and strike with a great deal of accuracy. The T-Rex on the other hand is a lot slower, but the positioning of the camera and the slow nature of its attacks means that it feels more difficult than it should be to catch a human in its powerful jaws. Despite all the issues with dinosaurs however, they still manage to be overpowered compared to their human counterparts. Essentially then, you have the choice of playing as the run-of-the-mill humans, which are functional but dull, or the near broken dinosaurs, which are interesting yet frustrating. It doesn’t take more than a few hours for you to decide that the best option is for you to just not play at all. 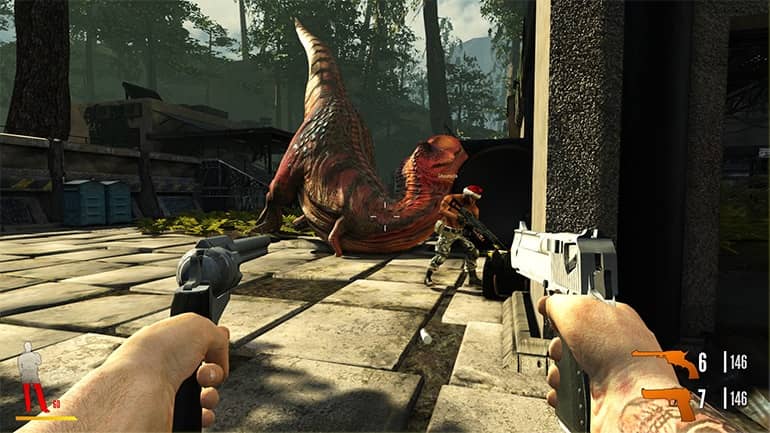 Primal Carnage: Extinction’s alternative competitive mode, Get to the Chopper, attempts to introduce some objective-based gameplay into the mix, but unfortunately still fails to provide a fulfilling experience. With the human team tasked to capture a sequence of points on the map in order to send for a rescue helicopter, it’s just too easy for the dinosaur team to gather en masse at these same points and cause total carnage. Because of this, Get to the Chopper matches prove to be quite unpopular, which is a shame as they offer a nice diversion from the standard team deathmatches. There is another distraction however, if you want to spend some time as a dinosaur without the stress of combat, in the form of a Free Roam mode that allows you to do just that.

So, with its unbalanced, dull and frustrating competitive gameplay, Primal Carnage: Extinction has one last trick up its sleeve which redeems it somewhat. Survival mode is a co-operative experience that pits up to four humans against waves of AI-controlled dinosaurs, and when you’ve got a good team together it’s pretty entertaining. As you’d expect, each wave throws an ever-increasing force of dino might against you, with every tenth wave sending a boss your way for good measure. There are even some invisible Velociraptor waves thrown in too. It’s not perfect; there are some absolutely atrocious AI on display at times, with dinosaurs often just stopping right in front of you, motionless, or running around in circles, but you won’t care as you’ll either be too busy laughing or just thankful for the easy kill. All in all, it’s the highlight of the package, but it still won’t manage to keep your attention for too long due to the small pool of four maps that are available. 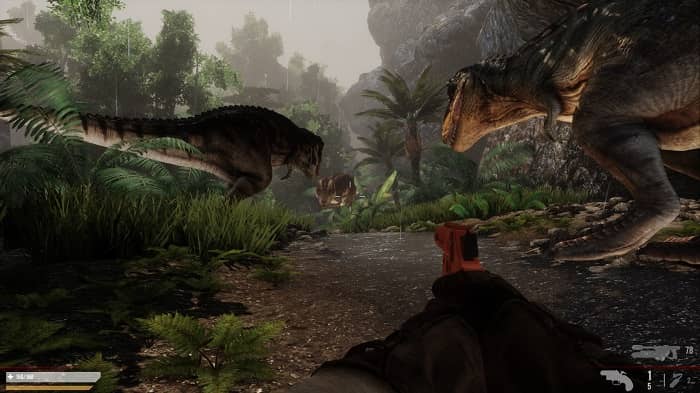 What makes or breaks any game that is multiplayer-focused is its player base, and unfortunately on PS4 Primal Carnage: Extinction’s already seems to be going the way of the dodo. Nearly all the matches I played had less than 10 out of a maximum of 16 players, and with the majority of players choosing dinosaurs, they ended up being very one-sided affairs. The dwindling player count also creates an issue in that the maps are too big to keep the game entertaining for only a handful of combatants, resulting in lots of boring bouts where you’ll tire of running around trying to find something to kill.

Being an indie game built using Unreal Engine 3 the graphics are generally poor, although admittedly the dinosaurs do look great. Whilst the humans and environments look decidedly last-gen, the dinosaurs sport very nice textures that really bring them to life. It’s just a shame that their animations are wonky and that they are subject to some serious clipping issues, which sees them sticking though buildings and other obstacles. On a positive note however, the game runs very solid at 1080p with no noticeable framerate drops whatsoever.

Maybe one day well get the dinosaur game that we deserve; one with cutting edge graphics, amazing sound and tense yet engaging gameplay. Until that day, you may find yourself having limited fun with Primal Carnage: Extinction, but I can’t recommend it. With its unbalanced gameplay, bland graphics, awkward dinosaur animations and dwindling player base, it often frustrates more than it entertains. The Primal Carnage series may have had legs for a few years on the PC, where it’s secured a small but loyal fan base, but on the PS4, I don’t think it will be too long until becomes extinct.