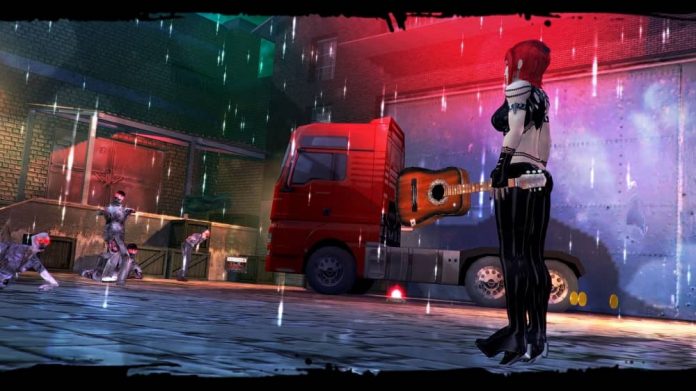 You want to know what’s really ironic? When your all-girl rock group, named Rock Zombie, suddenly becomes the focal point of a massive zombie outbreak. I mean, what are the chances? I bet those girls are wishing they’d called themselves “Rock Kitten” now, am I right?

Rock Zombie, developed by Quaternion Studios, is a hark back to the golden age of side-scrolling beat ’em ups; attempting to channel 16-bit classics such as Streets of Rage and pull them into the 21st century. Unfortunately, it doesn’t do a very good job of it. Although it starts out somewhat promising, with an entertaining (albeit basic) storyline and timeless side scrolling gameplay, it doesn’t take long until a wealth of problems start to make themselves known and unfortunately, there’s very little in the way of a saving grace.

All-girl rock trio Rock Zombie are half way through rocking a sell-out show, when all of a sudden things aren’t quite going to plan. Moshing gives way to brain-munching as the entire arena is overtaken by a horde of flesh-hungry zombies. It’s not the most ideal situation, but our rock chicks are not in the least bit phased: grabbing their guitars as weapons and a series of power-ups under their belts waiting to be used, it’s almost like they’ve been expecting something like this to happen. Upon starting a new game, you’re given the choice of which of the three band members you want to play as, each having a personalised set of stats that vary slightly (i.e. one has a stronger attack, one has more HP, etc.) You can also choose the difficulty of the game; be sure to choose wisely as you can’t change your mind unless you want to start all over from scratch. 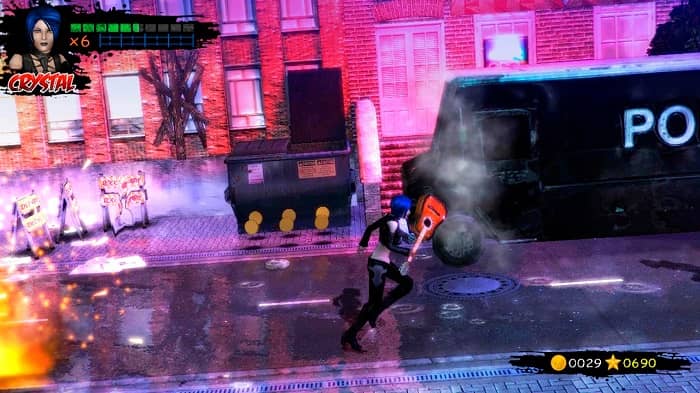 It’s safe to say that Rock Zombie isn’t going to win any awards for its visuals. The in-game graphics are not too offensive – for a low-budget arcade style title, they’re fit for purpose and the roughness around the edges is forgivable, but the quality of cartoon-strip style cutscenes are horrendous. The videos look like they’ve imported from a mobile version of the game with very little (if any) work being done to upscale the resolution. The soundtrack of the game is something of a redeeming feature – if you’re into cheesy rock music and don’t mind repetitive riffs, that is. The music starts out very catchy and enjoyable, but you’ll soon grow tired of hearing the same tracks on loop. No wonder everyone at Rock Zombie’s gig turned to zombies…

Rock Zombie actually started out quite enjoyable. The budget graphics were easily forgivable alongside the simple but fun gameplay. You have a series of attacks: a vertical or horizontal strike and a number of power attacks, each assigned to a particular button. You can chain these attacks into powerful combos, but the game does a very poor (read as: non-existent) attempt to ever explain these, so any combos I managed were purely accidental. It all chugs along quite nicely for a few levels: hack away at groups of zombies, find a few collectible coins (used to unlock items in the “Zombie Museum”) and generally bash and smash your way through to the end of the stage. Unfortunately, it becomes monotonous and infuriating very quickly. As the levels progress, you’ll find more and more lethal “traps” littered across the ground. The game never bothers to draw your attention to these; you’ll only become aware when you lose half of your health seemingly at random and realise it’s because you walked into a spider’s web, or mud puddle, or toxic goo. Even once you’re aware of their dangers it’s often impossible to avoid them thanks to the game’s 3D environment and annoying camera angles. Being that my chosen companion could only take two or three hits before she was dead, these traps caused much more of a problem than any enemy did. 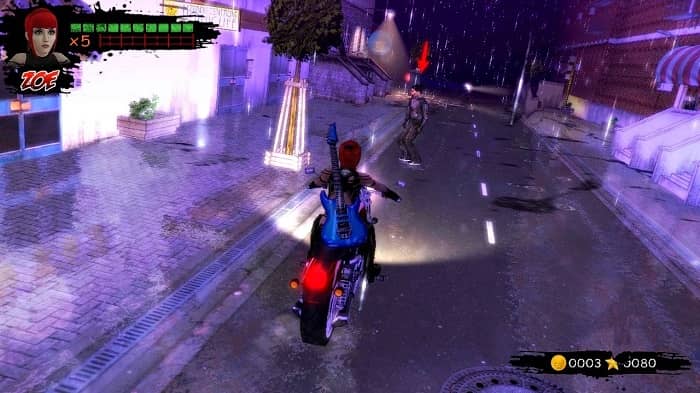 The standard beat ’em up levels are interspersed with a few boss levels and, surprisingly, some motorbike and driving levels. I’ll get to those in a minute. The boss levels are the usual repetitive fare, and very uninspired. The first sees you fighting a giant spider: it comes and goes, leaving you to fight a wave of smaller spiders inbetween. Annoyingly, damage seems to be capped each time, so no matter how many hits or special attacks you manage to get in, you’ll still have to go through about eight waves before you can defeat the boss. Yawnfest. As for the “race” levels… oh dear. Driving down a straight road, the aim is to knock over as many zombies as you can. In principle it sounds entertaining, and it is – for the whole of about 10 seconds, until you realise that the handling of the vehicles is akin to something from the Commodore 64 (and much less fun). The main problem is that these levels last far too long; had they been much shorter, they may have been more tolerable. It’s clear they are intended to break up the standard level structure by mixing things up, but end up being the most monotonous part of the game.

I can’t really recommend Rock Zombie. If you are a die-hard fan of the side-scrolling beat ’em up game and desperately need a new title to play, then by all means give it a go, but I have a feeling you’ll be left disappointed by its terrible graphics, poorly structured levels and mind-numbing repetition. Quaternion Studios tried to breathe new life into a classic genre by mixing things up a little, but unfortunately it didn’t quite work out. Do yourself a favour and stick to the classics.

Rock Zombie is available on Xbox One, Wii U and PC. We reviewed the Xbox One version.