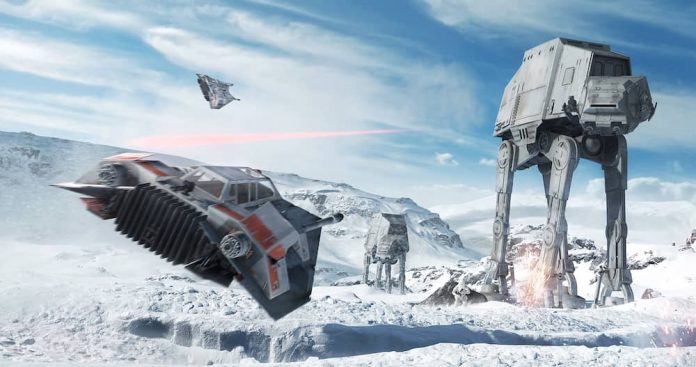 “Is the dark side stronger?”

Luke Skywalker’s famous question is so much more than a mere enquiry as to the metric strength of one mystical power against another; it is a universal philosophical question that has haunted humanity since we could first articulate ourselves. Are artists who push themselves into madness and despair greater than those who do not? Do those without morals triumph over those with them? Humanity has always had a fascination with the dark side, our negative selves, the bad in life. Positives are often lost amidst a negative sea. Many feel unable to watch the news it is too depressing.

The world of gaming is not exempt from this. There has been a huge wave of negativity surrounding Star Wars Battlefront. Much of it has taken the form of criticism levelled at EA and their questionable business practice. I have read countless damning reviews of the game. And yet, though I am in agreement with many about the profound wrongness of spamming DLC contents and even some of the criticisms levelled at the game itself, I believe that we have allowed our judgement to be clouded by a very human love of banding together to find one universal object for our hate. Taking everything into account, Battlefront can easily be seen as a triumph; the very Star Wars game we always wanted. And certainly a worthy successor to the legendary PS2 masterpieces we all sank weeks and months into during our childhood. The dark side is not stronger, it’s just quick and easy, after all.

Let’s look at some of the core criticisms of the game.

“Balance seems to be the crux of the matter. The two main criticisms of the game I hear are that the blasters are not equal, and that Imperials and Rebels are not fairly matched.”

In fact, both of these are unfounded. There is a claim that the DL-44 pistol is overpowered. It’s true, this pistol can land extraordinarily high-damage hits, and despite being a pistol, has a pretty decent range for those players who fancy themselves sharpshooters. But it only works if you are exceptionally accurate and quick on the draw to boot, and here we meet the issue: players will always find ways to bend the game’s laws to their advantage. If you round a corner and a player one-shot-kills you with the DL-44, it is not because the gun is broken, it is because the player wielding it is an accurate son-of-a-gun and you were at close range. Try hitting them from 800 yards with the Pulse Rifle and see how well his DL-44 serves them then. 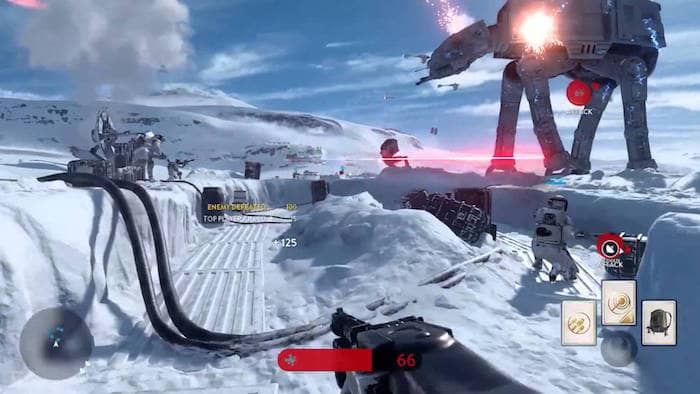 Hardly anyone complained about the Elite’s plasma rifle being unequal to the assault rifle in Halo: Reach. In fact, hardly anyone complained that most of the covenant weapons were inferior. Players created the famous derisory term “newb-tuber” for those in Call of Duty who employed the under-slung grenade launcher, but didn’t feel the need to mention it via social media to the game developers. In fact, the grenade launcher was far more unbalanced than any gun in Star Wars: Battlefront and available with very little work. Many of the reviews I have read claim there is only one pathway through the weapon load-outs in Battlefront, and yet play a single match and you will find no one is in agreement on the best weapon configuration. You will find even pro players using the basic E-11, a rifle available from word go. Some players hardly use their primary weapon at all (I am one of them), but more on that later.

“Only Stormtroopers are so precise…” says a world-weary Alec Guinness, a mysterious gravitas pervading his words despite his evident lack of enthusiasm. Many claim that Imperials have it easier in Walker Assault game types, and some go further to say it persists to other games such as Fighter Squadron. To provide a brief overview of Walker Assault: the Imperials are equipped with two advancing AT-ATs (or one when playing on Endor). The Rebels have to destroy the AT-ATs by activating uplinks which call in Y-wing attacks, thus immobilising the AT-ATs’ shields for a short time, rendering them vulnerable to attack. The Imperials have to keep at least one walker alive long enough to advance to the Rebel stronghold; upon reaching the stronghold the walker will annihilate it.

It may have been true in the beta that the Rebels had a raw deal, but no trace of that remains in the final game. The rebels can easily hold the uplinks and keep them active long enough to trigger the Y-wing attack provided they work moderately cohesively. The same cohesion is required from Imperial players; if they don’t push forward or defend the walkers at critical stages, they will inevitably lose. Asymmetric warfare is far more interesting than symmetric, and has been a long time coming to video games (whereas it has existed in table top wargames and card games for some time). Halo 3’s multiplayer was definitive at the time, but the exact symmetry of everything down to the maps, the tanks, the weapons and zero player customisation made it repetitive and eventually stagnant. In real war, armies are not identical. Even the original PS2 Battlefront titles were asymmetric to a lesser degree. This has been carried forward and for me it is one of the most intriguing aspects of the game. The Rebels and Imperials do not play the same, particularly in Walker Assault. You have to think differently about the battle and employ varying tactics to win.

One of the most frequent gripes I hear is that “there are only four maps”. Actually, there are more like 16. There are only four planets however: Endor, Sullust, Tattooine and Hoth. The various game types take place in different areas of the planet. These areas are part of one sprawling landscape design. This means that each planet yields four or five playable arenas, each one suited to the game type but not separate from the planet’s aesthetic as a whole. In addition the loving detail and intelligent design makes them feel like they are real environments and part of a real geography rather than the non-too-well disguised box arenas of most online shooters. Lavish detail has been applied, not just to the maps but to how your character interacts with them. Trekking through the ash-ridden lava beds of Sullust will leave your Stormtrooper’s greaves covered in silt and muck. Laser blasts will scorch the snow of Hoth, scarring it. Trees set alight and blaze over a midnight river on Endor. 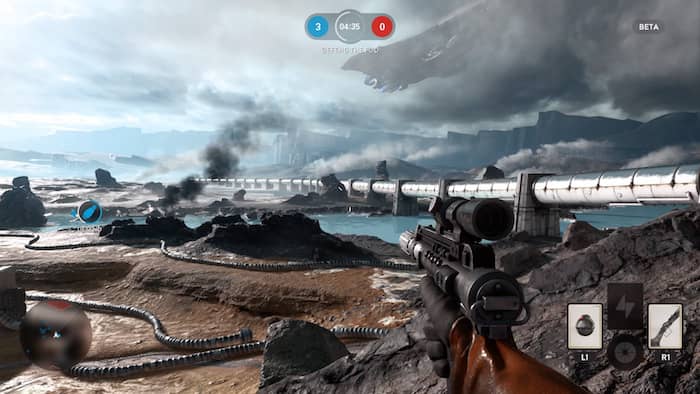 Perhaps the most valid criticism of Star Wars: Battlefront is the lack of a single player mode. It is all multiplayer and you need Xbox Live Gold or PS+ to play. This is, perhaps, a wasted opportunity. Given the high definition graphics and the clear attention given to creating seamless cinematic gameplay, why not have a storymode campaign with co-op capability? The game practically screams for it. Although the story mode was never the main reason I played Battlefront II, missing out on Galactic Conquest and those quick Instant Action games feels like being short-changed. One can see that the drastically enhanced multiplayer of the new Battlefront replaces Instant Action (and most players will have Xbox Live or PS+ anyway), but Galactic Conquest is absent and not coming until the next game if reports are to be believed. This was a seriously fun and strategic game mode that provided greater diversity in battles and gave them real significance. For example: you needed to defend a quadrant of space to stop the opposing team from being able to launch a strike at your home planet. The lack of space battles in itself is another blow, which is not to say I don’t love dogfighting through a canyon on Tattooine, but there was something about flinging a hapless boarding party against a Star Destroyer in some remote corner of the Galaxy that re-created the heroic adrenaline rush of the original A New Hope trench-run. It’s not quite the same being planet-bound.

The cards offer a an array of abilities which feel very distinct from CoD’s “perks” system: there’s no Juggernaut or Last Chance to be found here. The re-charge mechanic means you have to think very carefully about the best moment to employ your cards. Again, there is hardly any agreement on a best combination, and players adopt the cards which most suit their play style. I opt for the pulse rifle (a chargeable sniper round), the scout pistol (two shots at close range which can one-shot kill) and an ion shot (temporarily increase the power of your main weapon against vehicles, droids and turrets). Most people think grenades are mandatory, but I was never that lucky with them and this load-out gives me an immensely diverse range of fighting capability (a gun for every job). Others will take two types of grenade and a jet pack. Death from above given new meaning.

Speaking of death from above, the heroes and villains have been overhauled from the original games. Don’t get me wrong: I used to love nothing more than playing Assault on Tattoine and hacking apart the hero team with Darth Maul, but the brutal truth is that most of the heroes and villains had exactly the same set of abilities and moves. In Star Wars: Battlefront, no two are remotely similar. Luke provides crowd control, with his immense force push ability able to nail seven or more Stormtroopers in one terrifying demonstration of Force-power. Vader is a demolition ball who, with his Force Choke and lunging strikes, can tear apart an enemy defensive line. Han Solo is an incredible defender, especially in the narrow tunnel ways of a base or cave complex. Sit him on an objective with his blaster and he can hold it for hours. In addition, now they have removed the annoying slow health depletion you suffered in the original, the hero play experience feels far more like the power trip it’s supposed to be. 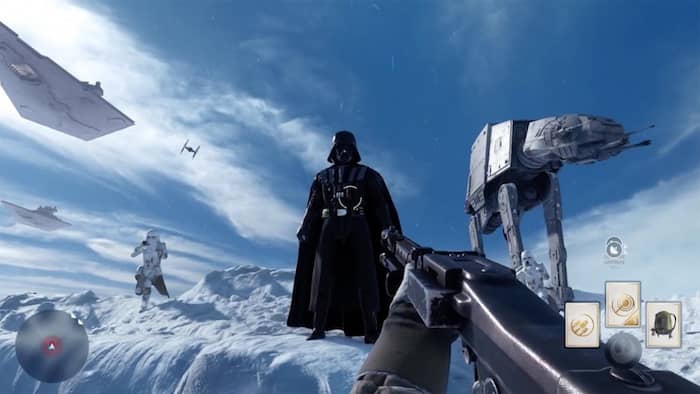 Furthermore, efforts are being made constantly to expand the game. The free DLC Battle for Jakku is coming, adding another planet, and further expansions are planned including new game modes.

Yes, there are issues. It would be nice to be able to play this game offline; it would be nice to have the extra planets added before they released the game; and yes, I worry that essential features will be added to the game in the future and they will not be free, but as it stands, Battlefront is one of the most immersive videogame war experiences of this console generation. In fact, it is one of the most immersive war-games of all time, which is ironic considering it is based on a mythical science-fiction universe, but pains have been taken to create a dirty kind of realism. Watch your character flinch as a laser grazes their shoulder; they stagger on, only to stumble as the shockwave from a thermal imploder rocks the screen. TIE fighters scream overhead, dropping payloads of laser fire, sending your comrades up in flames. It is in many respects a brutal game, reminding us that the Star Wars universe is at its best when it is dark.

Star Wars: Battlefront is available on PS4, Xbox One and PC. We reviewed the PC version.