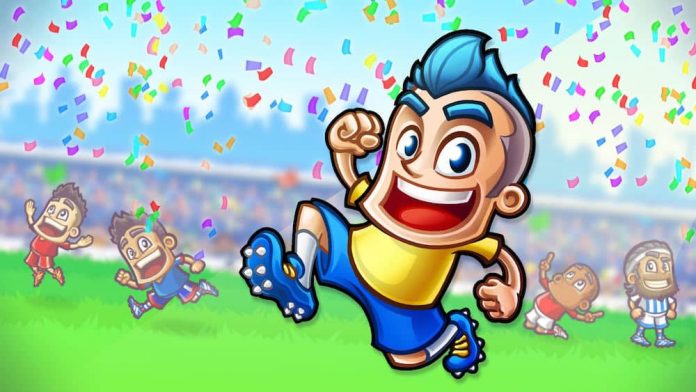 What do you get if you take the gameplay of Angry Birds, crank up the puzzle element, give it a football theme and then shake it wildly? Well…? Anyone…? Okay then, I’ll tell you what you get, it’s Super Party Sports: Football, and for the small sum of £3.99 it’s got a lot of goal scoring fun to offer for its low price of admission.

Featuring exactly 100 levels of physics-based puzzle-action, your task in Super Party Sports: Football is simple: take out all members of the opposing club before gracefully putting the ball in the back of the net. Yup, essentially, you’re the dirtiest football team ever. Although the premise of the game may be simple, don’t be fooled into thinking this is a game you’ll breeze through; the gameplay is actually quite tricky.

Each level plays like its own little puzzle, where you’ve got to work out the best route to take in order to eradicate all of the opposition and get a clear shot on goal. However, with all your players strangely unable to move from their fixed positions, you’re going to need to pull off some impressively fancy footwork. Players from both teams are strategically placed across the field, meaning victory relies on your ability to pass the ball between your team mates effectively, all the while taking random, violent shots at opposing players that don’t stand between colleagues along the way. Awarded up to three cups depending on how long it takes you from your first kick until you put the ball in the back of the net, you’ve got to get the angle and power of each of your kicks just right if you want to win the highest reward. 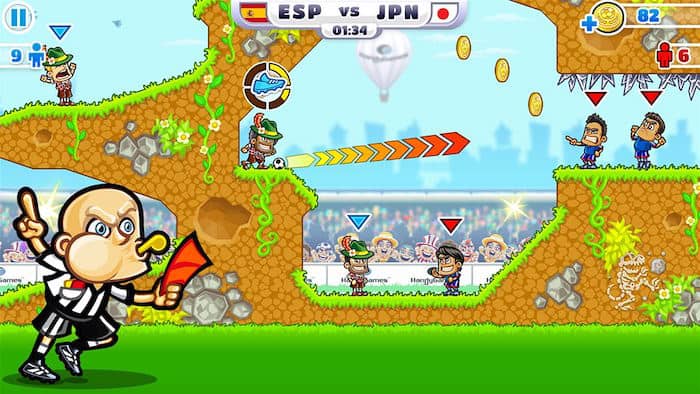 To stop the gameplay from getting stale, and also to increase the challenge, new elements are added to the levels as you progress. Power-ups that change the characteristics of the ball, rotating platforms that help or hinder your shots, and spikes that quickly burst your ball as punishment for a shoddy kick, all add much-needed variety to the levels to keep you puzzled and engaged. The opposing teams that you must destroy exhibit a bit of diversity too, with big-headed bullies that can beat up your colleagues and armoured jokers requiring multiple hits to dispatch. Finally, along the way, you’ll also have to watch out for referees and mascots. Referees, aside from really not liking being hit by stray footballs, will not give a second thought about issuing red cards to team members caught taking out the opposition within their cone of sight, whilst hitting mascots with the ball will result in a nasty time penalty.

Throughout Super Party Sports: Football’s levels are coins, and like any game that features gravity defying coins you’ll be wanting to collect them. Truth be told, it’ll be hard to not collect a lot of them, as they often sit along the best route for the football to travel between set points. The coins that you’ve amassed can be used for two purposes, and whilst both are pretty unnecessary, they do at least afford you a bit of choice. Firstly, you can pay to use one of two special balls in each level, either nullifying the effects of bullies and referees, or granting you bonus time for each opposing player taken out of the game. Whilst both special balls are useful when you find yourself stuck on any given level, using them too often will easily burn through your stash of coins, whereas a bit of patience and persistence is just as effective. Alternatively, you can use your hard-earned coins to purchase a range of comical kits for your players to wear out on the field. Although this option has no effect on gameplay whatsoever, playing as a team of mummies or skeletons is definitely an entertaining sight. 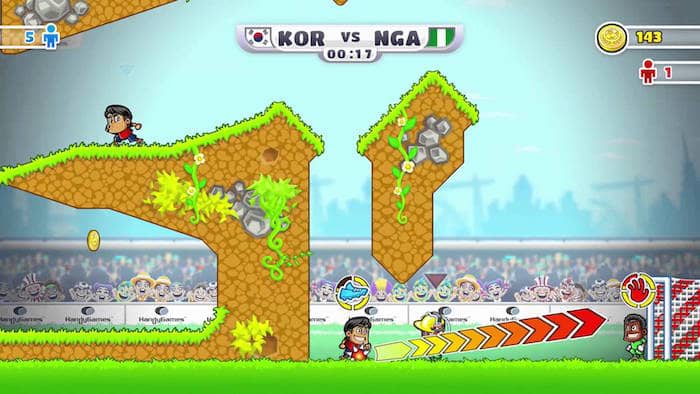 With gameplay that requires precision, it’s disappointing that aiming and adjusting the power of your kicks is where Super Party Sports: Football falters.  Both the angle and force of your kicks are set with the left analogue stick, which makes getting either just right overly complicated due to their high sensitivity. A much better solution would have been to have the power determined by how long you held the kick button, much like firing a weapon in Team 17’s Worms. As irritating as the controls are for kicking the ball however, they’re not a game breaker, as once you’ve spent some time with the game you begin to adjust to their twitchiness.

Despite the minor annoyance with the controls, Super Party Sports: Football is a truly enjoyable game. With its quirky 2D graphics and absorbing physics-based gameplay, you’ll spend hours and hours making your way through its 100 levels, eager to get all the cups, just because you know you can. It’s that kind of addictiveness that makes Super Party Sports: Football a steal at its bargainous price point, even if, like me, you’ve got no interest in football whatsoever.

Super Party Sports: Football is available on Xbox One.