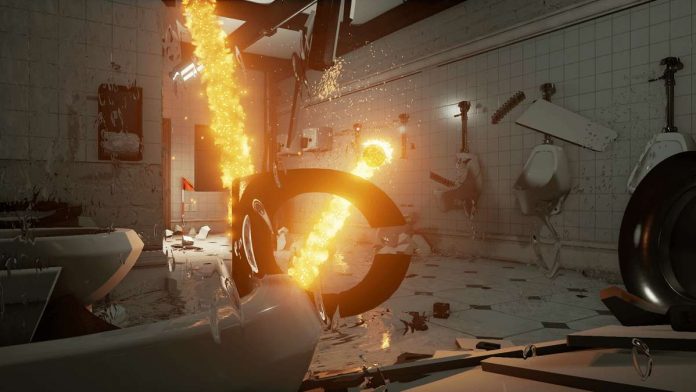 It’s golf with a twist.

Three Fields Entertainment is a British development studio comprised of veteran developers from Criterion Games, Ubisoft and Disney. They certainly know what they’re doing, having worked on – in my opinion – some amazing games such as the entire Burnout Series ( Burnout Paradise was exceptional) along with other titles such as PS2/Xbox FPS Black and Need for Speed Hot Pursuit.

Co-founder Fiona Sperry states their desire to draw from past experience: “We wanted to see what would happen if we mixed the attitude of Burnout with the destruction of Black whilst powering up a golf ball and setting it on fire — a clear nod to NBA Jam, one of my all-time favourite games. This type of fast gameplay has always been part of our DNA and it’s something we hope you’ll enjoy playing.”

Dangerous Golf isn’t about dressing smart and respecting the course. You’re not aiming to delicately stroke a putt or extract yourself from a bunker. It’s all about causing as much destruction and damage to the environment as possible. Take your driver and annihilate the ball into a “glittering palace ballroom” or even “set fire to a rural gas station”. If you cause enough chaos, your ball will set on fire allowing you to take direct control of it’s trajectory and direct it into as much crap as you can. Trick shots have been alluded to, and I can only assume this refers to smashing the ball off a few pots and pans making it somehow rebound off countless expensive furniture before dunking itself in the hole.

There’ll be over 100 holes to “attack” in outdoor and indoor locations that’ll utilise Epic’s Unreal Engine 4. Sperry also says that they’ve been working closely with Nvidia in order to create ” a truly physics-driven game.”

From the sounds of things, it’s really going to showcase what the next gen consoles are capable of whilst giving us a game that throws away seriousness in favour of arcade silliness. I think we have plenty of reasons to be excited for this one.

Dangerous Golf doesn’t have an official release date yet, but looks set to hit PS4, Xbox One and Steam users in May. Find out more here.