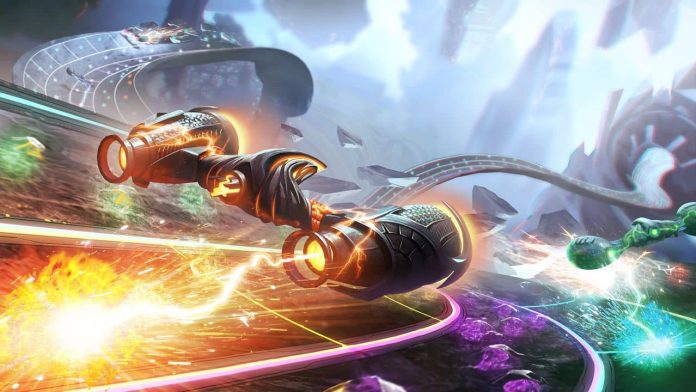 I never played the original Amplitude back in 2003 when it was released on the PlayStation 2. Looking at the track list, it’s rather a shame I didn’t as it’d have been a much more pleasant experience for my ears than this brand new rehash of the game from Harmonix.

I like the idea, I really do. Like many games from consoles gone by, Amplitude is held with fond memories by many who played it “back in the day”. And I’m all for old games being remade so we can relive the nostalgia of our youth. The problem comes when those games don’t live up to the rose-tinted memories we have of them. Sadly, I fear that’ll be the case for many people when it comes to Amplitude.

If you’re not familiar with Amplitude, it’s best described as being the ancestor of Guitar Hero and Rock Band. Before there were pieces of plastic, laden with colourful buttons and moulded into the shape of musical instruments, there was this, an arcade rhythm game that sees you at the helm of a ship, your mission being to hit buttons in time with prompts on various “tracks”. Each track represents a section of the song (be it vocals, drums, synth, etc.) and successfully clearing a section of the track will “lock” it – i.e. keep it playing automatically for a while. The remake of the game has a very similar premise. You have to jump from track to track, hitting as many notes as possible; the aim always being to get the highest score. High scores are attained by “streaking”: completing multiple tracks in succession. For every successful track, you’ll gain a multiplier to your score, up to a maximum of x4. Miss a note, and you’ll drop right back down to x1. Miss too many notes, and it’s game over. Sound familiar, Guitar Hero players?

The downfall for the 2016 version of Amplitude, however, is in the music. If your game is dependent on music and rhythm, it needs to be the strongest part of the package. Whilst the original game contained plenty of familiar tracks catering to a wide musical taste, featuring artists like Blink 182, Papa Roach, Run-DMC and David Bowie (may he rest in peace), you’ll find that of the 30 songs contained in the new Amplitude, you’ll have heard a grand total of zero of them before. Well, if you’re up on your indie games you may recognise a track from Transistor and another from Skullgirls, but you’re not going to find anything from your latest Now That’s What I Call Music! compilation. Perhaps that’s not such a bad thing, but with the majority of tracks sounding decidedly techno, to those uninitiated to the genre (i.e. me) a lot of them sound very samey. The campaign of the game – a 15-track journey – features entirely original songs created especially for the new game, whilst “quickplay” mode features a mix of new songs, a few remixes of original songs from the 2003 game, and a handful of non-original content from other games. It’s rather telling that the best song of the package in fact originates from Crypt of the Necrodancer.

The average-at-best music aside, the gameplay itself is, for the most part, cathartic and enjoyable. The 15-track campaign attempts to tell a story; it takes you on a journey through the brain of a person in a coma, with the aim being to repair various regions of their brain by completing the music sequences and ultimately reviving them. That’s all well and good, but it’s largely pointless – it’s not a game that needs a story, and unfortunately I think Harmonix have tried too hard to include some kind of narrative rather than focusing on what should be the selling point of the game: enjoyable music. Still, you’ll get through the campaign in around 90 minutes, during which you’ll be in a trance-like state, fixated to the pulsating and trippy graphics onscreen as you concentrate on bashing those buttons and moving your ship to where it needs to be. It’s good fun, but it’s all over a bit too soon.

There is plenty of replayability here, though. You have the choice of four difficulty levels to torture yourself with: the first being far too easy and the last being nigh on impossible (unless you’re some kind of wizard). The majority of us will probably find ourselves around the intermediate level, which for the most part feels pretty balanced, but has some tracks that feel much easier than others. In respect of the campaign mode, the difficulty builds nicely, and unlike beginner mode, you never feel like there’s not enough notes so that it’s boring. The main difficulty comes in changing tracks and maintaining your score streak. Whilst changing from one track to the next usually gives you a couple seconds breathing time to prepare your next button press, you’ll often find yourself in a situation where the next track is at the other side of the screen, not fully visible to you, and by the time you’ve finished your current track, you can’t possibly move over, see what button needs to be pressed, and actually press it in time. It does feel unfair to lose your streak when it seems impossible to chain tracks at times, but then again perhaps this was the intention of Harmonix? Perhaps it’s the game’s design to make you think about the order in which you play tracks so you don’t find yourself in a situation where you can’t possibly catch the next note? Whether or not it was intentional, it soon gets annoying.

The quickplay section of the game allows for local multiplayer, which is always a welcome inclusion. Up to four people can play at once, making for some chaotic gameplay, and new power ups and features unique to multiplayer are introduced to make it more competitive. To allow four ships on the screen at once (and therefore make sure all music tracks are always visible), the  viewing angle of the game zooms out and tilts slightly, which when you’re used to single player, is actually quite disorienting.

Those that played Amplitude back on PlayStation 2 may be able to gleam some nostalgic enjoyment from its modern offerings, but unfortunately, in a world where Rock Band and Guitar Hero rule the music rhythm game genre there isn’t much room for a little spaceship and its collection of repetitive techno tracks. Had the game included a wider selection of music it might have been a different story, but unfortunately fans of Amplitude are probably best sticking to the original.