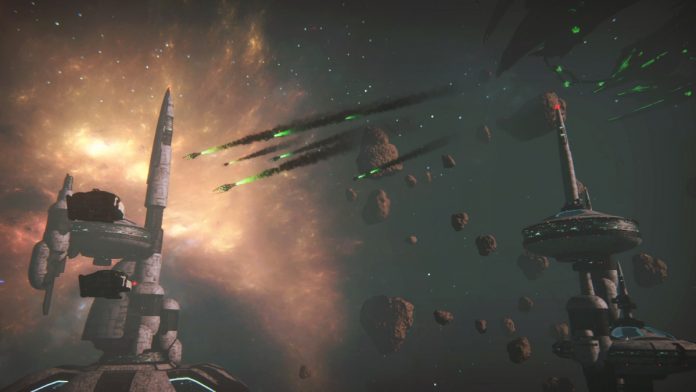 Star Conflict, the massively multiplayer space sim from StarGem Inc. and Gaijin Entertainment, has had an exciting addition to its roster: the Destroyer ship class.

The Destroyer is the fourth ship class to be added to the popular MMO. It’s a little slower than other ships, but it packs a lot more firepower and greater defense capabilities. The Destroyer has guns fixed to either side, as well as extra modules that allow them to make use of special skills, such as the “Black Hole generator”.

The new update to Star Conflict, version 1.3.1, also includes the addition of new maps, Leviathan, Nordstar Crash and Ambrosia-VII Factory. Leviathan is a massive space station packed with narrow corridors and great halls, Nordstar Crash is an asteroid containing the ruins of a dreadnought, and Ambrosia-VII Factory is an abandoned factory, full of hostility (and custard? We’re not sure).

Watch the trailer below for full details of the Star Conflict update.

Not familiar with Star Conflict? It’s a free to play massively multiplayer space simulation, available to download via Steam or from the official website. It puts you in the role of an elite pilot, allowing you to explore the vast universe, engage in battles and develop your skills. You can go solo or team up with fellow players to forge allegiances and make your mark in the galaxy.

Want to get in on the action? Now’s the perfect time! To celebrate the new update, we’ve got a host of codes to give away absolutely free, giving you access to the premium “Black Hort” spacecraft. The Black Hort is a rank 3 fighter from Jericho Fraction, but can be used by all players. It’s renowned for its powerful defensive mechanisms, and also has special properties that improve the stats of your whole team. It also rewards more money and experience in battle.

If you want a code, just leave a comment below with a valid email address and we’ll fly one over to you!