I loved the new Star Wars movie; really, really loved it. The major reason for that, I think, is because – right from the off – it felt like Star Wars. Fortunately for me (and developers Blackbird Interactive) Homeworld: Deserts of Kharak feels just like the original Homeworld and that made me feel right at… well… home.

From the first beautiful intro cinematic to the last, Homeworld: Deserts of Kharak is like stepping into a pair of warm, comfortable slippers – slippers with cannons, railguns and air-strikes attached. But this follow-up prequel to one of the most impressive RTS series’ ever also brings along some improvements and refinements that, in some ways, raise it above its vaunted predecessors.

Homeworld was always a story-heavy series on an epic scale and Homeworld: Deserts of Kharak is no exception. Kharak is a world at war – clans fight for the swiftly disappearing plots of fertile land and a group of religious zealots have begun unscrupulously attacking the Northern Coalition in an attempt to stop them from going after the Jaraci object – almost the dictionary definition of a MacGuffin. Several years previously an expedition was launched to recover the object and, after its disappearance, you’re going to be put in charge of leading the second expedition – an expedition that begins with the near destruction of almost all of the Coalition cities and the flight of your command carrier, the Kapisi.

The Kapisi is Homeworld: Deserts of Kharak’s answer to the Mothership from the previous games: a behemoth base/factory/research facility that must be protected at all costs and will spell disaster if lost. From it, you create additional units, build up wings of fast-attack aircraft and conduct research into improved technologies. But, unlike the Mothership, the Kapisi is much more than just a factory – if this were a game of chess the carrier would be both King and Queen: the key piece but with an amazing arsenal that just begs to be put to use. As you play through the campaign you’ll encounter ancient artifacts – precursor technology that lets you upgrade the carrier itself – and, as a result, the Kapisi eventually transforms from a useless bullet-magnet into a viable weapon in its own right. Not only that, but you are in direct control of the Kapisi’s subsystems and can route more or less power to turrets, ranged weapons, armour and repairs to dictate how the carrier deals with threats.

Of course, the idea is that no enemies ever get close enough to harm the Kapisi (unless you decide to use your fully upgraded carrier to spearhead your attacks – a viable tactic in a game made for the tactically minded). You’ve got a number of other units, all of which can be manufactured by the carrier, that you can use to take the fight to the Gaalsiens, too. These range from small Light Attack Vehicles to larger assault platforms and hulking cruisers. Each of them have individual strengths and weaknesses, meaning that you’ve really got to be aware of the situation at all times to ensure that you’re using the right units for the job. Resources are scarce and unit costs are often prohibitively high (especially when you consider that you’ll need to fork out for any enhancements and upgrades, too) so you won’t ever get the option to amass a great army that will carry all before it and decimate any enemies in the way. Units earn individual experience, can level up and are carried over from one mission to the next so you’re highly rewarded for micro-managing your battles. Fortunately, another idea that the original games had makes a very welcome return in Homeworld: Deserts of Kharak – the “Sensor” screen. This strategic view lifts the camera high above the battlefield and makes it much easier to get a sense for exactly what is happening out on the dunes. Units are represented by basic shapes, colours denote friendly and hostile units and you can issue the same set of commands just as easily from the tactical view as you can from the standard one. In fact, the Sensors screen is almost easier to play the game from – though you won’t get to experience the full beauty of the game in this abstracted, mostly blue information hub.

And Homeworld: Deserts of Kharak is beautiful. Just as in the originals, the design of the units is quite unlike anything else you’ve ever seen and you’ll never get bored of watching the carriers wade through the dunes, surrounded by tiny, speck-like units – the smallest of which are, in fact, more than twice the size of a Land Rover. Wonderfully animated cutscenes bookend each mission and really help to immerse you in the depth of the story, tying together the grand scale of the expedition and the frailty of the humans embarking upon it.

Another area in which this game excels is in the sound design; it’s a widely held belief that good sound design can make a good game great, but the sound design in Homeworld: Deserts of Kharak makes a great game incredible. The voice acting is superb – you’ll find yourself drawn into the characters and the world that they inhabit from the start. The eerie Gaalsien leader delivers his spookily threatening messages in a voice to send chills down your spine and when lead character, Rachel S’jet, laments about her family it’s enough to get the tears flowing; even the unnamed officers on the Kapisi will leave you worrying about them and wanting them to make it through unscathed.  But where the sound is at its best is in the little incidental moments that most games seem to miss.

You’ll be between giving orders and, suddenly, will overhear a conversation between some of the Kapisi’s crew – there’s a leak of something somewhere but they can lock it down – or you’ll send a LAV for repair and they’ll thank you for it or a vehicle will spot an enemy somewhere and give you the lowdown on position and unit type. It’s these basic exchanges that really bring the game to life and make it feel as though you’re really in command of these people as opposed to some detached observer floating around their heads. The unit selection sound gets the same treatment – it’s hugely refreshing not to have to hear the same two or three stock phrases when switching units, something that happens a lot in a game with as fast-paced skirmishes as this. In terms of the campaign itself, it is a little bit short: 10 hours is about average for people to complete the game’s 13 missions. However, each of those missions manages to feel somewhat unique – from the different types of desert you encounter (undulating dunes, rocky outcrops and deep, labyrinthine canyons) to some of the in-game events and mission-specific tasks you’ll have to perform – meaning that you’ll never be bored or feel as though Homeworld has given all it has to give. Saying that, some of the missions can become a little tedious if you, like me, can’t help but go after all of the resources, try to hack as many enemy vessels as you can or have an obsessive need to fulfill every single secondary mission requirement.

What really stands out for me about Homeworld: Deserts of Kharak (apart from it being so obviously a Homeworld game, despite being set on a planet) is the fact that I just couldn’t put it down. It’s a game that really gets its sandy little claws into you and just will not let go. I found myself thinking about it after a play session – wondering if I could have done something different to save those few units and be in a better starting position for the next level. Thinking about the future is integral to Homeworld – some missions are won or lost based on the units you take with you. Homeworld: Deserts of Kharak makes you think about the future in other ways, too, like how utterly awesome it would be, now, to take this next generation of Homeworld games back to the stars…

Homeworld: Deserts of Kharak is available on PC. 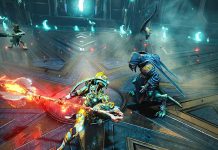 Godfall is Getting an Expansion and a Playstation 4 Version