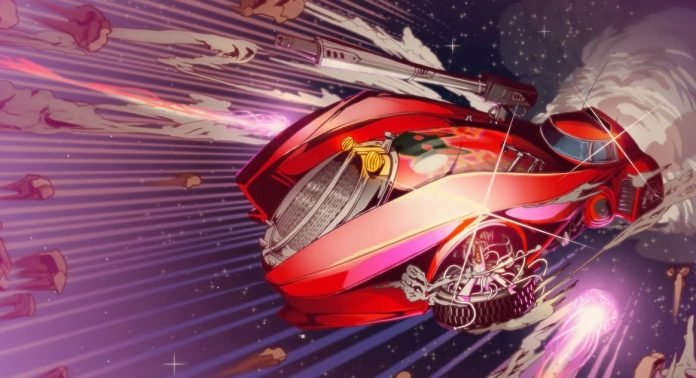 So you’ve got some friends around, the drinks have been flowing, and for some reason you insist on putting a game on for some quick, riotous fun.

Usually, we’d have suggested you play something like The Jackbox Party Pack that’s always great for a laugh or two, but now, there’s another party game you should consider on the block, offering a totally different experience altogether. Its name? Hyperdrive Massacre.

The first game to be released by Italian development studio, 34BigThings, Hyperdrive Massacre is an 80’s inspired local-multiplayer vehicular combat game. Whilst a lonesome gamer can play it with up to three computer-controlled AIs if they must, it really shouldn’t be considered as a single player game. There’s no story, or hashed together campaign mode just to tick a box so that they can boast about it on marketing material; it’s made for just you and a few local friends to kick back, enjoy and perhaps swear at each other a little. Okay, maybe a lot in fact.

Across the six modes on offer, one thing remains constant in Hyperdrive Massacre: the controls. Played on a static, top-down 2D plane, your space-car accelerates and brakes like it would in any modern racer; with the right and left triggers. Instead of the left analogue stick steering your vehicle left and right however, it determines the general direction you want to fly in, with a modest turning circle prevalent on all vehicles so as to keep the animation smooth and prevent it from becoming a twitch shooter. As a result, some may find the act of manoeuvring their space-car a little unwieldy – which admittedly, it is – but with all players in the same boat, it’s fair, and generally adds to the hilarity of the whole experience.

Manoeuvring issues aside, the rest of Hyperdrive Massacre’s gameplay systems and their associated controls are simple. Holding the X button allows you to deflect (most) frontal attacks with the aid of a handy shield, the A button fires your current weapon, and the B button releases a mine that will chase your opponents if they drive closely to it. As I said, they’re simple, but that’s the joy to it – anyone can pick up a pad and get to grips with it quite quickly. In no time at all, you’ll be having fast, frenetic space battles with your friends that are genuinely tactical and engrossing. Tense standoffs will occur, with players circling each other, alternating between shielding themselves and firing their weapons to hopefully catch their foe off-guard, all the while other combatants may seize the opportunity for a cheap attack from a distance. Groans of both joy and exasperation will fill the room, and relationships will be tested, but most importantly, you’ll be having fun. It doesn’t have to be all about combat either. Whilst modes like Deathmatch, Team Deathmatch and Last Man Standing require you to decimate your opponents to win, Death Race, Space Soccer and Spong offer alternative objectives. Death Race has competitors racing to claim checkpoints on the screen, taking out all who stand in their way whilst avoiding other players’ attacks if necessary. Space Soccer is just what it sounds like, with players forming into two teams before battling to score a set number of goals. And finally, Spong plays like air hockey, with two teams of players confined to their own side of the screen, yet still trying to get the ball in the goal like in Space Soccer. Whichever mode you choose, they’re all highly enjoyable, and offer a great deal of variety to Hyperdrive Massacre’s gameplay.

With its 80’s influenced audio and visuals, Hyperdrive Massacre is a treat for the senses too. The soundtrack is full of sly riffs and sick beats that wouldn’t sound out of place on a Hotline Miami soundtrack, whilst the graphics are colourful, clean and crisp. There’s also plenty of variety when it comes to your choice of  space-car and battle arena, with the initial raft available being bolstered as you put in the hours until you’ve eventually unlocked the full roster of 16 vehicles and eight environments.

All in all, it’s hard to say anything bad about Hyperdrive Massacre. You could say that controlling your vehicle is a bit of a farce, but it’s not really an issue. You could also bemoan its lack of a meaningful single-player mode if you were really spiteful, but that’s not the game’s focus. What we have here, is a prime slice of local-multiplayer gaming that offers both co-operative and competitive action that is balanced, consistent and most importantly of all, hugely entertaining. Hyperdrive Massacre is an essential party game, and deserves to be considered at the side of greats such as The Jackbox Party Pack the next time you have a gathering of friends. Or maybe even enemies.

Hyperdrive Massacre is available on PC and Xbox One. We reviewed the Xbox One version.