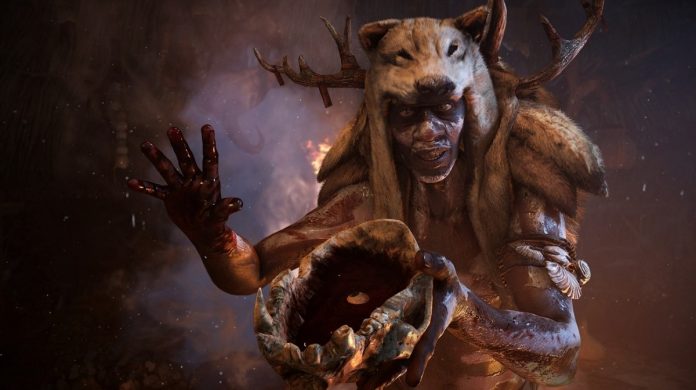 Feast your eyes on many high resolution shots of spears and bloody loincloths.

We’re all pretty familiar with the fact that Far Cry Primal looks to take the Far Cry template and re-skin it in an entirely new setting. Instead of a playing a gun toting hunk in a tank top, we’ll be mingling with tribes as Takkar in the ancient land of Oros. Guns have been replaced with bows, and this time we’ll be able to befriend sabre tooth tigers, bears and wolves to do most of the work for us.  It reminds me of a more violent version of The Flintstones without dinosaurs if that makes any sense, and saying that, they definitely missed a trick there. Anyway, you get the gist.

In this brand new trailer, we’ll drink eye soup and glimpse the ugly mug of Ull – the villain. Takkar also strikes up a relationship with Batari who’s the female leader of the Izila, a tribe that’s renowned for their skill with fire. And we also get acquainted with the language developed for the game that doesn’t just comprise of “Ug Ug”…

Far Cry Primal is releasing for Xbox One, PS4, and PC on the 22nd February. Pre-Order now from Amazon.