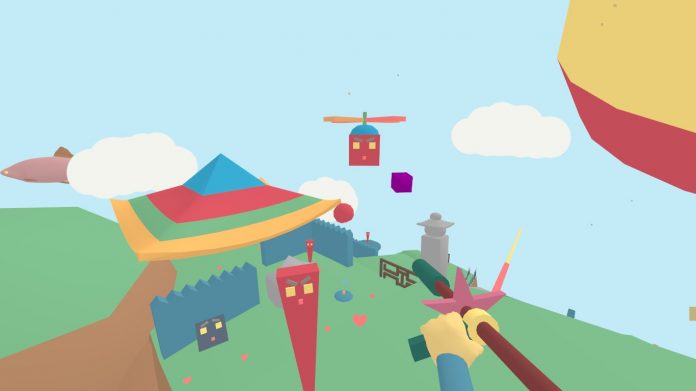 I am not even sure how to start off describing Lovely Planet, a game by QuickTequila first released on Steam in July 2014, and now out on Xbox One. I suppose it could be described as a FPS of sorts, but certainly not one that I have ever seen the likes of before…

Just reading some of the taglines assigned to Lovely Planet from the developer’s website would definitely lead you into thinking this game is very much something it isn’t. For example: “The most authentic First Person Shooter experience, a game of jumping and shooting”. Er, authentic? This game couldn’t be more abstract if it was painted by Vincent Van Gogh!

Let’s try another one. “A story so abstract, it’s not told at all – you won’t know what hit you”. A-ha, that’s better. Now we are getting somewhere! You do literally start this game with a “WTF”; not knowing what is going on, where you are or what you should even be doing. You just appear in this pastel-coloured polygon world armed with some sort of wand with hearts littering the landscape. The graphical style is very reminiscent of what you would have found in the early 32/64-bit era with games like CyberMorph on the Atari Jaguar and Sega’s Virtua Racing. Basically lots of flat coloured polygons with some bits of shading and quite empty landscapes around them. It looks quite nice, in a simplistic way, and will certainly appeal to those who still love the retro games of that era.

What about the gameplay in Lovely Planet; what exactly is it? Well, you’re armed with a gun that looks a bit like a big wand that can be fired whenever you want. You don’t have any ammo to worry about or anything fancy like gun upgrades or power-ups. You can also jump, walk around and… yeah, that’s about it actually! This game couldn’t be much more simplistic in its core gameplay even if it was on an 8-bit console. The simple idea is to get from one end of the level to the other, that’s all there is to it. Along the way you have to shoot a few bad guys, jump over obstacles and figure out where to go. Once you actually realise what the hell is going on, it’s extremely easy to just dive in and play the game. As the levels go on they get bigger in size, the enemies grow in number and get more vicious, and the routes to the finish get more complicated. If you get hit by an enemy at any point or you fall into a hole it’s back to the start. One hit kill and no health bars here. You can also restart each level with the press of a button too in case you get yourself stuck – and you will do, I assure you. There are also “friendlies” that also kill you should you accidentally hit them; not that you will know it until you shoot them for the first time.

Like any good FPS, you can strafe, hide behind objects and sneak up on the enemy, but there is no multi-player death match here; Lovely Planet is strictly a solo experience. As the game goes on it gets really tough: you’ll find yourself repeating the same level over and over again, getting killed with the exit in sight and screaming at the screen in frustration. The sedate start to the game is soon replaced by some fiendish level designs and unrelenting enemies intent on taking you out. I wouldn’t say the game is unfair; there’s definitely a way to do each level, just some of them require utmost perfection in your actions. You will really need to have a great deal of patience to progress anywhere in Lovely Planet, so if you’re easily frustrated then this game really isn’t for you. And in case the bright colours didn’t already given it away, it also likely won’t appeal to the hardcore FPS fans out there: if you spend your nights glued to Call Of Duty or Halo then this game is just going to seem too basic to be enjoyable.

To sum Lovely Planet up is difficult. It’s certainly an interesting experience, but I’m just not quite sure how much I enjoyed it. The cute Japanese-themed world is certainly a big departure from any other game out there on the Xbox One right now, and its originality is definitely a plus, but Lovely Planet is perhaps a little too abstract to stand out from the crowd. It’s clear that the developers were trying to do something very different with this game, but I’m not convinced they managed to pull it off.

Lovely Planet is available on PC and Xbox One. We reviewed the Xbox One version.