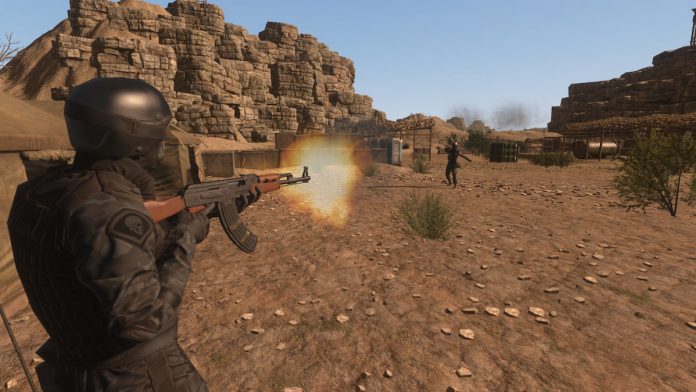 A task has fallen to me. A terrible task. Like the Ancient Mariner from the old Coleridge poem I am duty bound to “stoppeth one in three”. I have a dire warning for those I stop. That dire message is…

DO NOT BUY THIS GAME.

Yes. Down to One might not be the worst game ever made, but then again, it might be. I don’t know whether it was intentionally designed to fall apart at the seams like the first botched creature galvanised into a few measly seconds of existence by a lesser mind than Frankenstein, or whether it is accidental incompetence. Either way, I cannot warn you strongly enough: do not heed its siren call. Do not succumb to the temptation of the game’s tasty premise.

Down to One claims to have been made to give people a tactical survival game without zombies. There’s a fair amount of Hunger Games and Battle Royale thrown in there for good measure too. 42 players battle it out online until only one remains (hence the title). They must use their environment to survive, ensuring they have sufficient supplies of water and food, and of course, weapons.

Unfortunately, the game does not live up to this awesome premise. In fact, it does not live up to anything. It is a broken, garbled mess. No wonder the game devs quickly reduced the Early Access price from $15.00 to $1.00. Patrol the Steam forums and you will quickly see that even those players who paid $1.00 for it are asking for a refund.

You may be thinking something like: How? How can a game be this bad? Surely, I should try it out and see for myself… In which case I have failed miserably in my quest. Alternatively, you might be thinking none of these things. You might whole heartedly believe me. But if there is a niggling doubt in your mind, let me allay that by telling you a short story about my gameplay experience. Please folks, do not try this at home… It was a clear Wednesday evening around 7:30pm. The previous night, I had installed the game, which took no longer than 20 minutes. I had eaten. Work was done. My partner was busy so I wasn’t eating into our time. I had allowed myself the whole rest of the evening to sit back and immerse myself in this game. I even had a beer waiting for me on the side. Special treat.

I loaded up the game and was greeted with graphical options. I found it charmingly retro – reminding me of the old days of playing Quake on PC. I selected a low setting,  favouring speed over graphical quality. I then arrived at the main menu. The first thing that struck me as off was that it was a still jpeg of a military scene. Although I noted this it at the time, I should have read deeper into its significance: the military scene was like something from CoD, tactical units working in cohesion. Wasn’t this supposed to be a survival game?

Beneath the options to play was a “Perks and Customisations” tab. I click on it. The similarity to CoD hit me again when I realized there was a perks system. Unlike the Star Card system from Star Wars: Battlefront (which felt like a refreshing new take on what was a familiar concept), this was entirely derivative. “Ninja” allows you to move silently. “Defender” means you take less explosive damage. The only remotely interesting one is “Survival” which means thirst and hunger meters decrease slower. The game makes no attempt to explain either of these concepts or their implications.

I select some arbitrary perks and clicked the “Play” button which takes you to an again retro server-select menu like something out of a cheap World of Warcraft knock-off. I selected one server. It took me to another static loading screen with more military/tactical imagery which didn’t fit with my notion of this as a survival game.  The music then jammed and started looping. It cut to a black screen where I could hear footsteps and the sound of eerie wind. The game crashed.

Okay, must have timed out, I think to myself.

This happens three or four more times in which I decide it’s time to open that beer, if only to calm my mounting exasperation. I read a few of the comments on the Steam forums, wondering if it’s my computer which is at fault (though it has never failed before with much more high-powered games). I keep trying. Finally, I get a server which connects. Because the game has already started, I am not playing but simply observing. As I mentioned, however, the game is 42 player free-for-all. There are 21 people left alive. There is no time-limit on rounds (though the playable area moves and shrinks to force players to engage with each other). I sit for the next 20 minutes watching another player trek over darkened heathland.

I don’t know whether it was a negative side-effect of the alcohol or simply my exaggerated sense of aestheticism but I began to find watching this player quite compelling. The game has nailed its sound, if nothing else. The startling hiss of a boot crunching on dried grass. The sound of water splashing on parched lips when they uncovered a water-source. A couple of times the shadow of another player would appear and the player I was watching (unarmed) would flee for cover. These chases became kind of like dreadful dream sequences due to the poor rigging and mechanical control, the player struggling every step to make it away.

Eventually they found an abandoned shack in which they sought to hide. It was infested with hornets. Watching this player stumbling through the darkness (it was a night-game), searching for anything useable in the house, the sound of the hornets slowly mounting with skin-pricklingly intensity, I began to have a little faith in the game, if only for this atmosphere of dread. There was no music to bring me to back to the revelation this was a game (though an awful Black Ops rip-off plays on the main menu looping every minute), one of the few decisions they got right.

The character I was watching eventually died (snake-bite). I tried to switch to another player; the game thought about it for four seconds then crashed.

I re-logged in one more time. To my surprise I easily found a game and joined it. I experienced a day-time game in the desert. I ran to a shack. Investigated it. Decided to hide their for a bit. After a while, I realised hiding wouldn’t cut it forever. My thirst and hunger was getting concerning, though I had no idea of the game’s mechanics so didn’t fully understand if I would die, lose health, or suffer some kind of side-effect. I went out and saw a player in the distance. The game lagged but didn’t crash me out. I ran towards them (they hadn’t seen me) hoping to take them by surprise. They turned and shot me in the face. One shot one kill. I had played for two minutes (roughly). Now, I had to wait another 30 minutes to start again.

It was then I realised, at long last, this game is no fun.

So please, if you’ve read this and are thinking about it, think again, don’t buy Down to One, not until it’s been fixed to the point it is playable. Even then, with all the games that there are out there in the world, it seems pointless to cling on to this one. There will be another survival game. There are other survival games. There are shooters with survival modes and survival horrors: a million and one ways to get your fix.

Down to One isn’t one of them. At least, not yet.

Down to One is available on PC.