Buyer’s remorse is particularly prevalent in January. Your wallet is already reeling from the cost of Christmas when you’re sucked in by those Boxing Day sales. Those double figure reductions look legit and although you didn’t need an electric chainsaw this year, it’ll probably be useful when the zombie apocalypse finally does come round.

Plus, given the size of that price reduction you’d be losing money if you didn’t buy it. The trouble is, that truth be told all you’ve guaranteed yourself with that impulse buy is 12 monthly repayments which you can’t really afford. The Preposterous Awesomeness of Everything is just like that electric chainsaw, except it’s even less useful and definitely a lot less fun.

Developer Joe Richardson tries to lure you in with a unique graphical style. It’s a cross between a cartoon and a photo and look, the in-game characters are all naked! “Hahahaha,” you chortle to yourself as this bizarre and ultimately pointless point and click misadventure downloads on your PC. Inspired by classic verb menu-based LucasArts titles you use your mouse to navigate the game’s protagonist around an island. There are a number of really freaking funny verbs like “disrespect”, “pray for” and “befuddle”. You can even do a “backflip”. Why not eh?

On starting the game, you soon learn that the hipster cheap thrills don’t end there. The graphics by the way, on closer inspection, are awful and look a bit like what might happen if Photoshop got absolutely boozed, ate four late night kebabs and then spewed over your favourite family photo album. No, the entirety of The Preposterous Awesomeness of Everything is supposed to be one big laugh.

The plot attempts to cleverly and hilariously satirise the human condition, the global political system and even the very idea of progress itself. You’ll run an election campaign, build a rocket and even go to space. It all sounds totally awesome right? 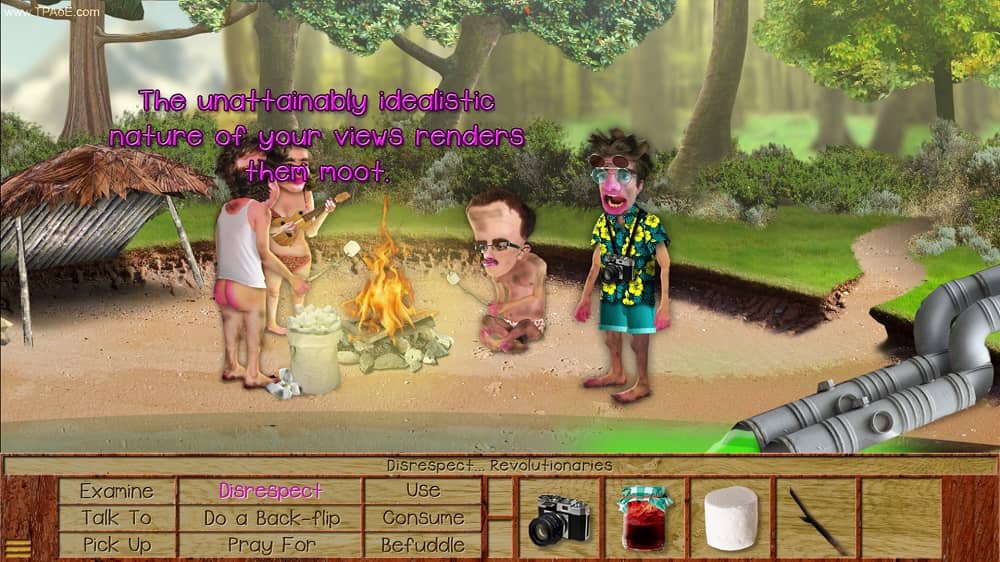 Well it isn’t. It’s a gigantic mess of a game that is dull, pretentious and not funny at all. It’s dull because there’s no coherent narrative and no real gameplay. Add to that a non-existent soundtrack, horrendous graphics and a game interface which is prehistoric. Not to mention screes of irrelevant, verbose text. For example, you’re introduced to a character called Drake who makes jam (I’ll hold my tongue).

Examine the jam and you’re told: “Drake has learned to pickle and preserve the food he finds in the forest. He uses rudimentary tools to gather fruit, vegetables and herbs by the basketful, then preserves them in a vinegar made from fermented coconut water or cooks them and stores them in sterilised jars. This gives him more free time for thinking and learning and growing awesome moustaches. He also makes wonderful jams.”

Think of all the things you could have done instead of reading that extract. Maybe there are people like Drake out there somewhere pickling stuff right now. If so, I really hope they keep their preserves and their awesome moustaches to themselves. I never ever want to meet them.

As I hope must be clear, The Preposterous Awesomeness of Everything is pretentious because it’s painfully obvious it is trying really, really hard to be cool. Even the very name of the game is a blatant and failed attempt to be wacky. Just ask yourself, “what would I think of someone who used the term ‘preposterous awesomeness’?” And finally, it’s not funny because whilst putting a load of random shit together might work if you’ve cast Noel Fielding for a sketch show on Channel 4, it does not work if you’re making a video game.

Ultimately, The Preposterous Awesomeness of Everything looks quite interesting at first sight but just do yourself a favour and buy that electric chainsaw instead.

The Preposterous Awesomeness of Everything is available on PC.