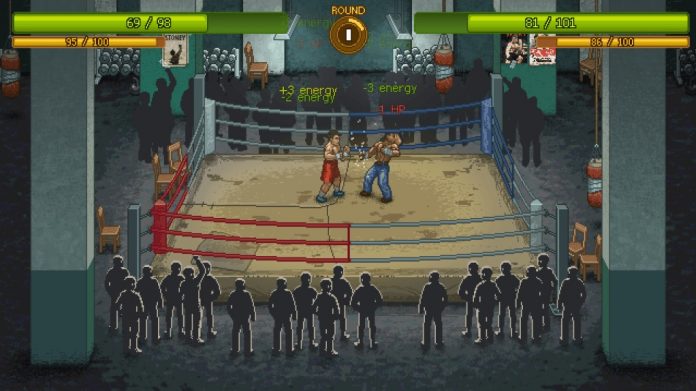 Have you seen Raging Bull?

It’s what you get when you set unchecked masculinity on a road to ruin. DeNiro plays a quiet, subtle lunatic to perfection, framed within a movie that doesn’t require you to be a fan of boxing to be shocked and moved by it. Rocky is like that. Well, it’s actually not at all like that. It started as a statement on hard work and goal achievement and quickly spiralled into miserable US propaganda and jingoism. But hey. It’s all fun, right? And that’s where we pick up Punch Club, a new simulator game released on steam.

Much like the aforementioned movies, you don’t really have to be a fan of sports to enjoy Punch Club – it’s a mouse driven, resource collecting simulator game, where you have to juggle your boxer’s tiredness against his hunger levels and happiness levels, while at the same time building up his skills as a fighter. You interact with different objects in the world to achieve these goals, so expect to be left-clicking a whole lot in this game. Eating food can decrease hunger, and give you a bit more energy to carry on working out, but are you eating the right kind of food? And as you work out, your tiredness will lower to the point where food won’t do anything for you and you just have to sleep it off. It’s entirely possible, by the way, to ruin your sleep patterns, and end up working out throughout the night and working all day, sleeping for a few hours a day. Sometimes you’ll have the perfect amount of work-out time versus money earned at your job, sometimes you won’t, but it never goes perfectly. careful resource management is a required skill in Punch Club and you’ll never have a perfect day. Like Rocky and Lamotta before him, your fighter has to learn the virtues of hard work and sacrifice to rule the day.

Punch Club constantly hands off small yet important choices to you at every point. For example, taking the bus to work instead of walking will save you time but cost you precious money, not to mention it’s entirely possible to get jumped by gangs straight out of the 80s if you walk to the local pizza joint. Maybe you’ll beat them and improve your skills, but maybe you’ll be kicked to the curb and have your money stolen instead. Whoops. Or maybe you can take part in the local, legally sanctioned tournament, or have a go at extremely dangerous street fights and underground “fight club” style competitions. The latter gives you great money rewards, but defeat can mean a permanent injury and a hit to your all-important stats. Do you have a pizza for food or something with more substance? Well, it’ll cost you.

It’s these little moments that make up most of Punch Club – which sounds boring, doesn’t it? it’s really not, though, as the collective upkeep of all your sliders, stats and resources combined together make the minute-by-minute choices really fun and important. Having to begrudgingly eat a pizza rather than that healthy option because you don’t have any money makes your victories in the ring all the sweeter because you sacrificed something to get there. Punch Club is filled with all kinds of references, in much the same way that the fantastic Retro City Rampage is absolutely rammed to the gills with references – although much less egregiously here. It has your fair share of Jay and Silent Bob references, Tyler Durden References, and of course the Rocky references were inevitable but it never suffocates the experience and always feels just like it should – which is to be just referential in nature. Graphically, the game is a throwback as well. It’s not quite 16 bit or 32 bit specifically, it’s just… retro. Not being bound by either conventions works in its favour as you get relatively high-res pixel art and it looks colourful, atmospheric and gorgeous. It’s almost like playing an 80’s cartoon approximation of Rocky.

So far so good. The grind of the game thematically makes a lot of sense but getting to the actual fights is where it ends. The outcome of your fight is determined in part by the stats you grind for, at which point you sit and watch a turn based battle take place before you. at the end of each round you have an opportunity to swap out some of the skills you’ve chosen and then the round begins again. Usually, if you have higher stats than your opponent, you’ll win. It’s pretty boring. Actually, it’s really not enjoyable at all and it would have been really great to just have full turn-based combat where we can fine tune and micro-manage our fighter’s tactics. As of right now, it’s a totally disappointing statistical grind fest that feels flat.

Boring, too, is the audio design, which disappointingly recycles the same audio tracks again and again, with extremely minimal sound design. Characters have low mumbles for voices (think Pingu but with the volume turned all the way down) and actions in game often have a cheap “stock” feel to them. While it doesn’t affect the overall feel of the game, it would have been wonderful to have your Rocky moment to some classic 80’s cheese in a chip-tune style. What happened here? There was so much potential! After playing for a good few hours, the stat grind will slowly wear you down and you’ll eventually feel like hitting punching bags and doing push-ups in your garage is a little pointless. Imagine if Rocky IV’s hilariously terrible training montage was stretched out for the entire duration of the film and you have the general experience of playing Punch Club. It’s cute for the first two hours, but the grind will wear you out and these moments don’t really carry the same weight as they would have in the film. It’s a fun and addictive introduction to what could have been a really neat management simulator if the momentum of those early grinds had been built upon and expanded rather than simply repeated ad nauseam. Initially, though, Punch Club is a charming and cute look at the American underdog story that has been done to death so many times in Hollywood. It’s just a shame that it outstays its welcome so early on.

Punch Club is available on PC.