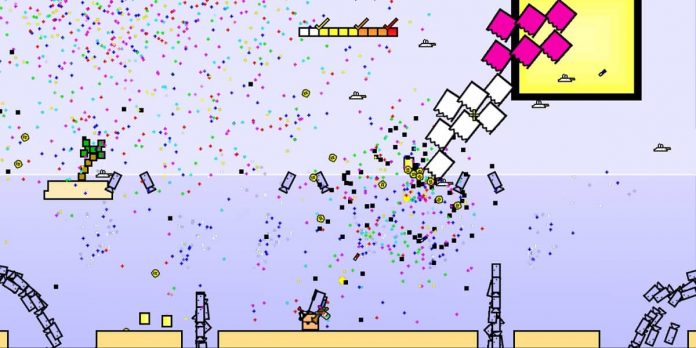 A week ago, if you were to approach me and utter the words, “Oh man, have you played Rubber Ducky and the Rainbow Gun?” I would have laughed in your face, banished you to another plane of existence and pretend I never knew you. Well, today it is I who shall utter such words, briskly followed by a, “Why not?”

Yessir, this is indeed a review for a totally legitimate game appropriately titled Rubber Ducky and the Rainbow Gun. Developed by cr2cr studios, Rubber Ducky and the Rainbow Gun is a game in which you play as the “Rubber Ducky” in question having discovered a “Rainbow Gun” after a rainstorm of coloured weaponry (yeah, I know, stay with me). It’s a ten-attack, single screen 2D shooter with a whole variety of themes and challenges to experience in each of the 10 available levels.

The artwork for the game is massively simplistic, consisting almost exclusively of squares, and yet still retains a certain level of charm and adorableness (especially when you come across the penguins who, naturally, bop to the level’s music). It’s the level of simplicity that you can usually tell what all of the assets on-screen are though some seem somewhat vague as to what they’re supposed to represent. Obviously, graphics aren’t everything, – though, in a game called Rubber Ducky and the Rainbow Gun, I don’t suppose much is expected – especially after hearing the game’s sound assets. I can confidently say that Rubber Ducky and the Rainbow Gun has the best soundtrack I’ve heard in a good couple of years, it’s super funky and, much like BIT.TRIP RUNNER, the visual environment works alongside the music almost turning it into a rhythmic game. Another aspect that threw me, given the name’s bizarre and almost childish title, was the narration. The thing is, the narration’s actually good. A feature prominent in many games’ narrations is breaking the fourth wall, and it’s usually a cheap method to overcome the fact that the writer lacked imagination, however the really rather meta narration that Rubber Ducky and the Rainbow Gun offers is surprisingly well written. While it’s not exactly the works of a legendary novelist, the narration breaks the fourth wall and displays obvious self-awareness to create that perfect, satisfying level of cheesiness, all without dropping all senses of creativity.

Gameplay-wise, it’s a fairly simplistic game. You control Rubber Ducky with WASD while aiming and firing with the mouse. There are a number of weapons to collect throughout the game, all given to you at the beginning of certain levels, and they all massively vary in how they work (e.g. The Rainbow Gun itself works just like an assault rifle, whereas the banana bomb weapon is more of a grenade-like weapon). It’s not a particularly challenging game, Rubber Ducky and the Rainbow Gun, though there are aspects of bullet-hell games in certain levels in which you’re required to dodge a ludicrous amount of projectiles at once.

For what it is, Rubber Ducky and the Rainbow Gun, is a good game. With varying yet simplistic mechanics and a delightful narrative, it’s a great game to give to the younger ones to keep them quiet for a few hours, or just something you can play in-between rounds of bigger and better to keep your mind active.

And you get a Steam achievement for buying the game, that’s gotta mean something!

Rubber Ducky and the Rainbow Gun is available on PC.