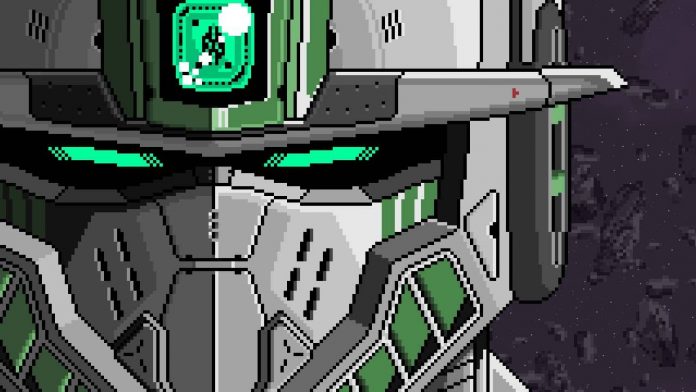 Who do I have to talk to about having games put in an arcade cabinet? Because I desperately want Stardust Vanguards in a cabinet, where it belongs.

Stardust Vanguards, brought to you by Zanrai Interactive, is a local four-player duelling game “inspired by old-school anime space operas” that pits you against/alongside three other players whom you must defeat in battle from within a mech-type-android-suit-thing. Armed with sword, shield and a gun, as well as the ability to summon your own squadron of ships, fights can get really rather interesting. I quite like to merrily skip by any instructions or tutorial when jumping into a game for the first time; working out controls isn’t often too difficult a task but Stardust Vanguards may have changed my outlook on instructions as, foolishly having ignored the “How To Play” page, I didn’t realise summoning units was even a mechanic until after about an hour or so of gameplay. That, and the general weaponry isn’t as simplistic as it first may seem.

Summoning units isn’t too complicated but I still didn’t manage to work it out for myself, so I’d recommend you learn from my errors and read through the instructions before jumping in! Assuming you manage to get a kill or two, you’ll earn a certain amount of RP or “Reinforcement Points,” and by holding your unit summoning button, your RP bar begins to deplete as a squad of computer-driven ships flies into battle from the side of the screen. It’s all very exciting. While these units are generally rather handy in versus battles, they’re far more effective in the cooperative survival mode against waves of Space Pirates. If you let your guard down for a split second on survival mode without any units to cover you, then you’ll probably die a horrific death because, as far as I can tell, one hit and that’s it for you buddy. However, there are methods to prevent your inevitable demise: you’ve got your shield that temporarily blocks all hits, but that makes it difficulty to navigate tight areas of some maps. Your sword can also deflect shots, though you have to have some brilliant timing to keep that up. 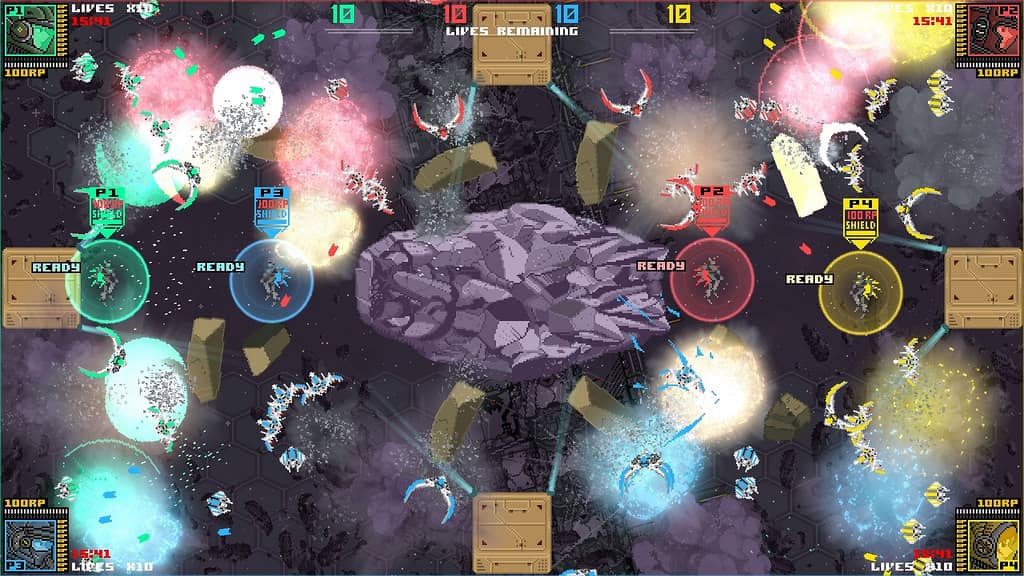 In a previous review of mine, for Skyscrappers, I briefly talked about how the soundtrack and announcer significantly enhanced the nostalgic appeal to create an authentic retro-arcade game. Well, Stardust Vanguards managed to surpass Skyscrappers in that field by at least a mile and a half. While Skyscrappers‘ announcer was rather impressive, whoever voiced the announcements for Stardust Vanguards takes the cake. Not only are the sound assets excellent and spot-on in the retro department, but the pixel artwork is stunning. Zanrai really nailed the perfect level of detail, delivering pleasing aesthetics without straying too far from the retro-arcade style they obviously intended.

Usually, when it comes to these modern interpretations of retro games, developers tend to skimp on the amount of content the game offers for some reason, whether it be because they’re lazy, they lack the budget or they wanted to create a more “authentic experience”. Well, that’s not something Stardust Vanguards falls victim to at all with 13 different maps and several different game modes with different rules and mechanics. One issue I have with the content, which may be entirely subjective, is that too much of it is locked away to begin with. While I understand the vast majority of games expand with progression, I’m not sure it’s 100% appropriate for an arcade-style game. Also, another minor area of improvement could be that the vanguards you can play as (Emerald Coalition, Scarlet Kingdom, Azure Singularity and Amber Federation) could differentiate more because all the mechs and ships are identical, unique only in their colours, and each vanguard’s attacks are similarly identical. At that point, there’s no reason to even have a choice between characters.

Overall, Stardust Vanguard is a great retro-arcade style game. Anyone could easily put hours into this game thanks to its simple, addictive nature. I can imagine it being especially popular at parties and whatnot considering the lower difficulties offer players of any skill-level a chance of winning.

Stardust Vanguards is available on PS4 and PC. We reviewed the PS4 version.