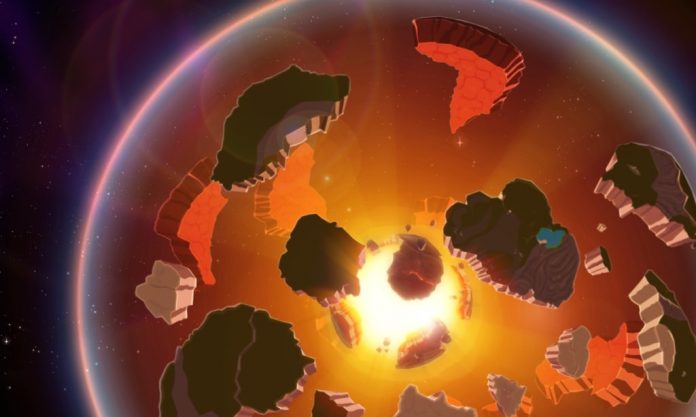 Image & Form’s first game Steamworld Dig was good enough. I even have some friends out there who invested countless hours in to it, but it never really drew me in. Don’t get me wrong, it was an excellent game from an untested studio, but its central conceit of Dig-Dug style subterranean platforming simply didn’t speak to me at the time.

Enter Steamworld Heist where you play as steam-powered robot cowboys fighting a war of resistance with a 2D, cover-based battle system reminiscent of the excellent X-Com reboot, on the outer rim of the Milky Way where human beings are a distant myth and a ruined Earth is being put back together with giant anchors and chains by a group of fascistic royalist bots lead by an evil queen.

The first thing you will probably notice is that Steamworld Heist is beautiful and perfectly suited to its handheld presentation. The entire world is hand-drawn and presented in glorious 2D with a strong design that breathes life and story in to every corner of its presentation. Everything looks run-down, rusted through, and lived-in, with the exception of some late game additions that serve to add some variety to Heist’s visual storytelling. There are dozens of unique items and weapons, some of which can be seen on character models, including a variety of hats that can be shot off of your opponents or purchased from haberdashers for no other purpose than just because. I can see collecting all these hats becoming an obsession for some completionists; acquiring them from the heads of your opponents while in mission requires a fair amount of skill and patience.

When you enter combat by guiding your tiny ship of misfits to a nearby mission on the world map you will be loaded in to a partially randomised, turn-based encounter with one of several objectives to complete. Sometimes it can be as simple as acquiring a random piece of loot or killing every enemy in the stage. Sometimes you’ll have to hold out for a set number of turns against an exponentially increasing force or go toe to toe with a boss displaying its own special abilities and tactics. In every case you will be making a hasty evacuation back to your little starship, sometimes under fire. 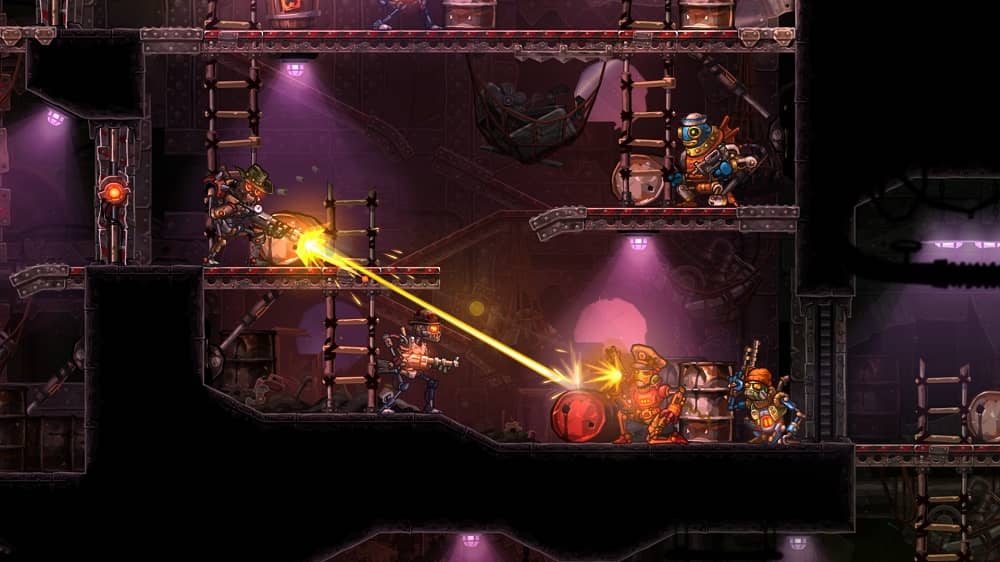 Combat itself consists of taking turns with your steambots who receive two actions divided in a way that will be familiar to anyone that played Firaxis’ X-Com: Enemy Unknown. You can attack, move, or sprint. Attacking will end your turn, but moving then attacking is possible under most circumstances. Sprinting will allow you to move twice as far but will immediately end your turn without attacking. There are a host of special abilities that appear with each new level your steambots earn and weapons you acquire that can alter this flow but for the most part these are your options.

As you manoeuvre your bots you can place them behind cover that offers varying degrees of protection. Positioning is key here as there are no to-hit chances to consider, it’s all skill based. You guide your cowbot’s shot directly and you’re either on target or off. Most of the projectiles you fire ricochet off surfaces and a talented player can easily reach targets crouched behind full cover by taking the angles in to account and aiming carefully. It’s an interesting addition that fleshes out a fun little combat system which never really got old during the 12 or so hours I spent with Steamworld Heist.

Once you’ve cleared out the enemy presence you usually have an opportunity to collect the rest of the swag in the level. “Swag” is Heist‘s de facto term for loot and includes supplies of water (the currency in Steamworld) or equipment. Each cowbot is allowed a weapon, two pieces of gear, and a decorative hat when entering a mission. There are quite a few options to choose from but the weapons and gear you collect iterate on one another and inventory space is limited so you’ll probably fall in to a habit of collecting a handful of the weapons and items you actually use than swapping them out for new variations as they become available. In this sense the equipment that you acquire acts more like an upgrade system than a loot treadmill you’ll be chasing and experimenting with. 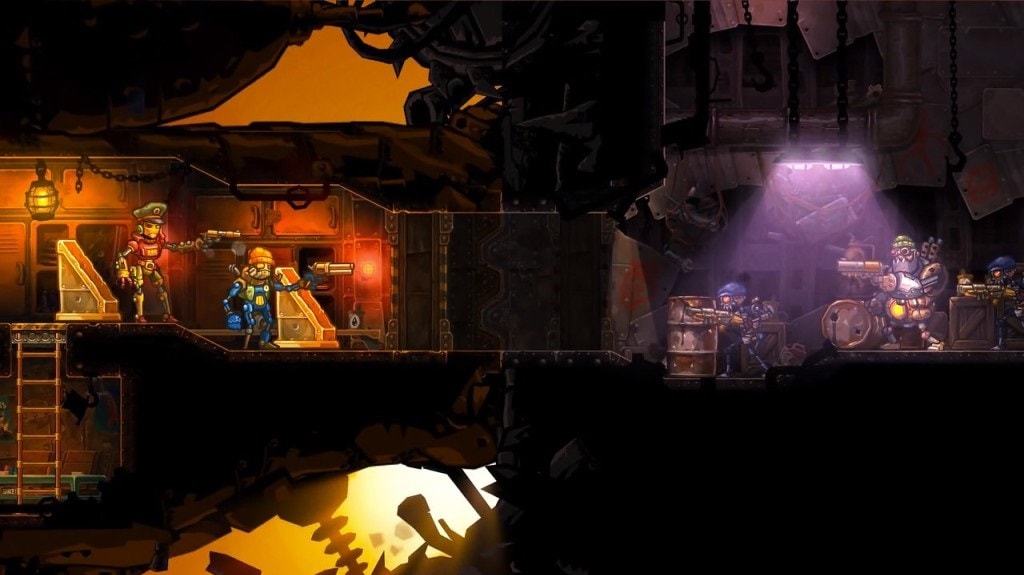 Heist has five difficulty levels to choose from which is probably for the best as its difficulty can spike furiously from mission to mission, especially in boss encounters. Higher difficulties offer a penalty to the water you’ve collected for failing or aborting a mission but offer an increase to XP earned at the end. I played on a mix of difficulty levels and found “normal” to be challenging but fair with casual being where my personal tastes lie. I found anything beyond normal required a degree of strategy and patience that I’m not known for. I am certain that any player can find something here that will challenge them appropriately and Image & Form should be commended for rewarding players seeking a challenge without penalizing those just looking for a good time.

And that’s really what Steamworld Heist is, a good time. From start to finish, Image & Form offer an intriguing world with a fun story, engaging combat, and plenty of value for the price tag. Yippee ki yay! *Pew* *Pew* *Pew* *Pew* *Pew*

Steamworld Heist is available on Nintendo 3DS and coming to other formats soon. We reviewed the 3DS version.