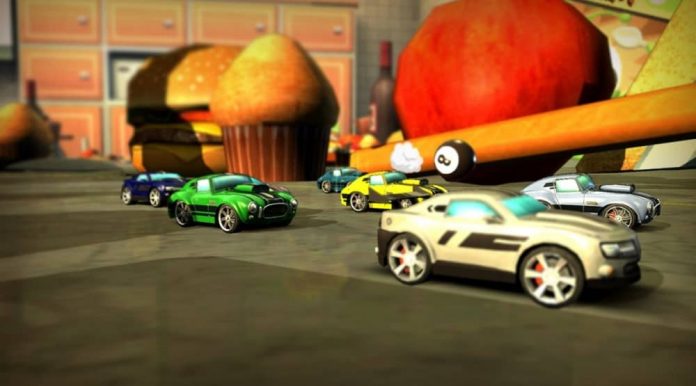 What do you get if you cross the classic top down racing game Micro Machines with Super Mario Kart? It’s not a joke, so don’t expect a punchline – this is exactly what Super Toy Cars is, a new racing game from Eclipse Games available to download now from the Xbox Store.

As both a huge fan of retro games and a lover of racers, one quick look at Super Toy Cars suggested that it was right up my street. The graphics reminded me very much of Sega’s brilliant Sonic Racing Transformed, one of my favourite Xbox 360 games, and the style is an obvious hark back to the likes of Codemasters’ brilliant Micro Machines and Rare’s Rock ‘n’ Roll Racing. In essence Super Toy Cars is a very similar game to Super Mario Kart – you have cute racers, colourful tracks, multiplayer modes and a host of fun weapons to take out the opposition with. Rather than selecting from a range of different characters though, you just simply choose your vehicle for each race and away you go. There are only a few different cars to start with but more can be unlocked and purchased as you go along, each one having its own unique attributes such as grip, acceleration, drifting and top speed. The cars might not have real names but it’s very easy to tell what they are; there is no mistaking a VW Beetle, Camper Van or Wrangler Jeep. 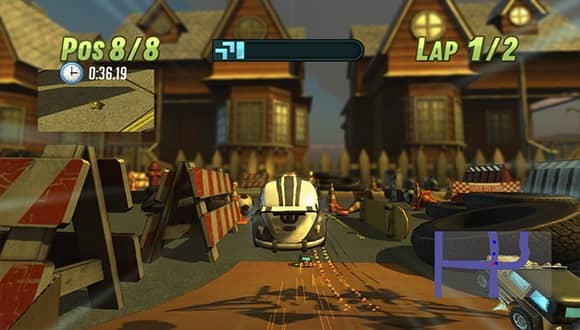 The races are interesting in that they take place in similar scenarios to Micro Machines with the cars seemingly shrunken to a tiny size to scream around the kitchen, playroom and your latest LEGO creations among others. Strangely, some of the tracks do also feature weather conditions too, which is rather strange considering the surroundings. Each race contains different obstacles, multiple routes, weapons to collect and coins that must be grabbed to purchase new cars and upgrades. Weapons are easy to use, and a handy mirror pops up so you can see what impact any weapons dropped behind your car may have. My personal favourite weapon has to be the 8-ball, a big pool ball that launches from your car and takes out everything in its path. The tracks are grouped into championships and you must finish in the top three to progress; all pretty standard stuff. Between races you also get timed bonus stages where you can try to collect extra coins to help you along the way.

While the computer races are fun, the game, like most of this type, really comes into its own in multiplayer. Super Toy Cars supports up to four players locally in a split screen arrangement, which is great as a long as you have a big TV. There is nothing more fun than taking out a member of your family with a missile and then pipping them to the finish! Another one of my favourite features of Super Toy Cars is the many different ways in which you can alter the look and feel of the cars, adding a level of complexity and realism for more serious racers that you wouldn’t really expect to find in a game of this type. All in all there are 16 different cars, 12 different tracks and 48 different events to race in the career mode. You certainly can’t accuse this game of not being comprehensive and everything within the game also seems to be highly polished too. 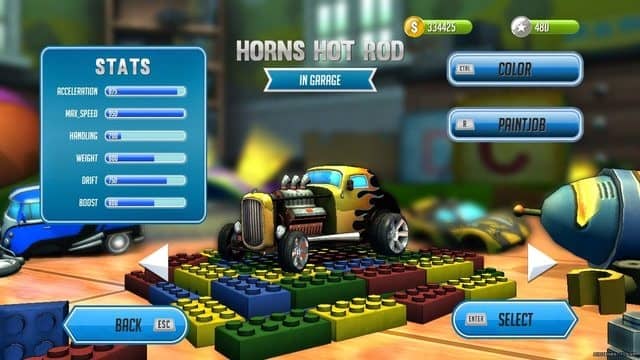 The graphics in Super Toy Cars are really slick: the colourful style works perfectly and I loved the little nuances like the reflections in the table and tumbling LEGO bricks. The soundtrack also deserves a special mention; Eclipse opted to license the audio rather than make their own, with all in-game music provided by indie band The Spin Wires. It’s pretty good too – although probably not the kind of music you would expect in a game of this type. Where Super Toy Cars does fall down a little is in the gameplay – it does have a few minor flaws. Every time you crash, the game wastes a few seconds before setting you back on the track. This would be fine if it was always needed, but often it isn’t: sometimes a seemingly innocuous crash costs you valuable seconds when you could have just carried on – a little unfair at times. Along the same lines there is also a restart button which is easily pressed by accident when you’re trying to activate a weapon.

You could argue that the gameplay is a little bit generic and samey, but that’s probably to be expected with a game of this type. Despite the few niggles, Super Toy Cars is a pretty solid and enjoyable game that will certainly appeal to fans of the genre, although others might want to wait for the current £7.99 price point to drop before they make the plunge.

Super Toy Cars is available on PC, PS4, Xbox One and Wii U. We reviewed the Xbox One version of the game.