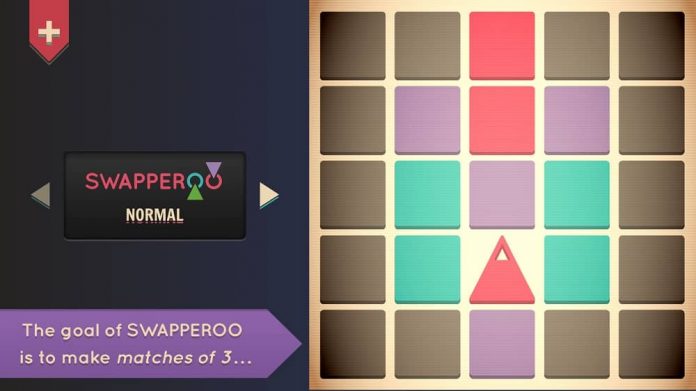 Swapperoo is an average yet enjoyable puzzle game by Fallen Tree Games Ltd. It is a colour co-ordinating square switching type of game, in the same vein as the ever-popular Bejewelled Blitz or Candy Crush. It’s the sort of casual game to play when dinner’s in the oven, or when you’ve booked the day off work to wait in for that parcel that won’t actually arrive…

Ahem. Swapperoo is a nice, chilled out game that gets increasingly difficult and forces you to think logically. There are 25 “easy” puzzles – one for every letter up to Y – and then 25 harder puzzles. I started getting properly stuck from T onwards.

There are also three pages worth of challenges, which really get you thinking. You’re given a set number of moves to complete the puzzles. This reminds me of another game called Kami (a beautiful origami style puzzle game of a similar nature).

Part of the difficulty of this game is that only certain squares are moveable in these puzzles: you can only move squares marked with arrows, and only in the direction they are pointing. Circles can be detonated to help you achieve your goals. Then you are introduced to skull squares; these count down with each move you make, and if they get to zero it’s an instant game over. After this, some squares lock (so they cannot move unless you destroy the squares underneath it, or match its colour); some have stars on and you must collect a specific amount to complete the puzzle, and some have hearts on, which you must protect from the squares that have eyes on, and move of their own accord. There are also what I mentally referred to as “chainsaw” squares which damage the square next to whichever direction they’re pointing in. There are however power-ups at your disposal: Swap (allows you to swap any tile regardless of its current state), Delay (adds extra moves to skull squares) and Detonate (destroys the entire board and starts again). Although these are extremely handy, you have to really work for them. They only become available after you destroy a certain amount of a certain type of square.

Often the puzzles become infuriating and unsolvable as they just don’t give you the right squares, to the point where it begins to feel more like a game of luck than skill. As with the puzzle’s more popular predecessors, there’s only so much repetition you can take before needing to go and play something else for a while.

Swapperoo is enjoyable, but it doesn’t really stand out on the market. It’s brightly coloured and kind of quirky, but there is no unique selling point, nothing really different. The background music reminds me of the sort of mind-numbing repetitive melody you hear when you’re on hold, so I often muted the sound. The name itself I’m not keen on either, and it doesn’t particularly reflect the game in any way. If the game involved kangaroos, by all means I would find it amusing, but with the absence of marsupials, the name wouldn’t really intrigue me whilst browsing through the Steam store. As if the developers knew there was nothing special about it, they tried to incorporate some form of plot. Once or twice between puzzles “someone” hacks into your computer and types random riddles, warning you about completing the puzzles. It’s a very vague storyline, doesn’t really lead to anything and is very unnecessary. Don’t get me wrong, I love a good storyline, but there’s a time and a place. I don’t want a half-arsed one in my puzzle games, thank you very much.

Overall, Swapperoo is a good game to play when you’re bored. There is a good sense of achievement upon completion of puzzles, persuading you to go onto the next one, and the next one. Compared to other puzzle games out there, it’s lacking in uniqueness, but it’s still enjoyable. However, I would definitely not pay £6.99 for it.

Swapperoo is available on PC.